WY NOT: Show Up 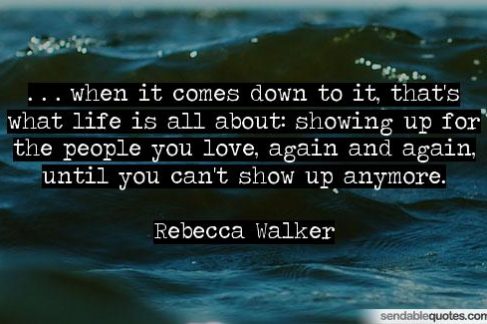 I don’t know about you, but quite a few things in my life have not worked out the way I expected (and hoped) they would. I look back on experiences with a touch of sadness in wondering what went wrong and what I could have done better. I have always struggled with the idea of “no regrets”, because as I have grown older, experienced and learned more, things in my past tend to rush back with the knowledge and clarity of hindsight. I tend to kick myself a lot in these moments.

However, I have adopted a parallel attitude for myself, where I simply look back on what I have done, contributed, said, etc. and make sure I am happy with myself. The situation might have turned sour, but I stand by everything on my end. Whether it is the end of a job, relationship, friendship- whatever- I mull over what I would have done differently. Most of the time, I am satisfied, and sashay to the next adventure with my conscience clear.

*Side note: This is NOT to say I am perfect and not at blame for some of these endings. Life is still life and humans (even myself) are not as flawless as Beyoncé tells us to believe we are.*

I am saying this as more of a commitment to be a decent human being. For example, I get so frustrated with people when they are not dependable or considerate of others. My parents are incredible teachers and models in the golden rule and always drilled that concept into my brothers and I, so I am incredibly sensitive when it comes to that quality in others. For that reason, I have made it a point to show up when I say I will and never make excuses later. Yes, (of course) I mess up, but yes, I always own up to my mistakes.

When you are selfish enough to no-show or bail on people frequently enough, you’re robbing yourself of the respect from others and (if you have a conscience) your dignity. I know, “You shouldn’t care what others think”, but in terms of being dependable when you’re counted on, I wholeheartedly disagree. You should care, and you should be transparent. It all comes back around to being a respectable human being, let alone a good quality friend.

Show up, even when you don’t feel like it. Obviously if you’re sick or if something serious comes up, whoever is depending on you will understand. The worst that can happen is that you don’t enjoy it (and even then, you can always leave) but at least you can go with your head held slightly higher in the simple pride of knowing you came through with what you said you would.

When you lack dependability, it only hurts others. They take you not being there as you not making them a priority. I know this because I have people in my life I know not to count on until they are physically present in front of me. They have proven that to me time and time again. It just goes to show, you can tell a whole lot more about a person by what they do, rather than what they say.

It’s not a hard concept: just be a good person. Show up, care, and respect each other.