WY NOT: Believe in Yourself 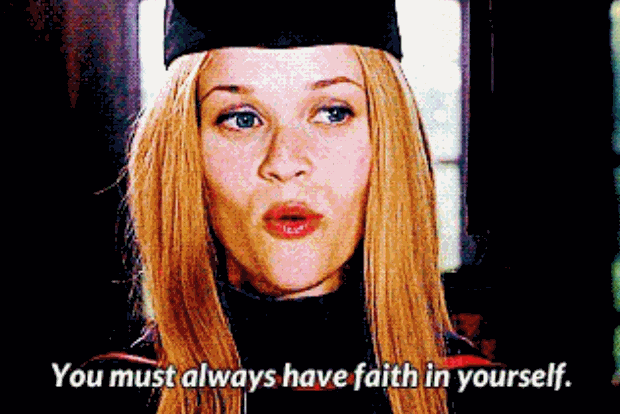 Anyone who knows me knows how much Reese Witherspoon inspires me. I grew up watching her and honestly I believe my blonde highlight obsession comes from her gorgeous locks. Legally Blonde has always been a favorite movie of mine, so when a friend posted a Legally Blonde-based meme to Facebook, I legitimately squealed.The quote was, “Live every day like Elle Woods after Warner told her she wasn’t smart enough for Harvard Law School.” It is the sassiest, most empowering, bend-and-snappiest thing I’ve ever read…and it didn’t hurt that picture accompanying it was Elle Woods, head held high, winning her trial in court.*snap snap snap*

I immediately grabbed my paints, one of my blank canvases (and maybe some gold glitter) and painted the quote which now resides on my wall. Every time I look at it, I get a determination switch flipped inside of me. When I get rejected, I read that quote and think, ‘I’ll show them.’

No matter what it is, who it is, or what insecurity it brings up in me, I suddenly feel capable. I go from setting out to prove them wrong, to focusing on proving it to myself. I mean, isn’t that what happened in Legally Blonde? Elle went to Harvard to get her man back. She ended up with the outcome that she had been hoping for all along, but she realized so much had changed that she didn’t even care to have his approval anymore. She ended up doing it all for herself.

Elle learned to believe in herself. No matter the doubts, taunts, threats, or sabotages. She refused to quit and kept on trucking, even when she felt completely isolated and insecure. I think that’s a pretty dang good role model- fictional or not.

I hate to even think about it, but if I were in Elle’s shoes, I would have given up way sooner. I may just be lazier or talk myself out of things and blame it on “it just wasn’t meant to be…” or maybe I just don’t have the confidence she has.

But I take heart knowing she didn’t either. She gained it by testing herself and growing. It was hard, and she even got down on herself and almost gave up. Thankfully, with her determination and an amazing group of encouraging friends, mentors and family (blood or not)- she succeeded.

I hope we can all take on this new mantra when life dares us to prove it wrong. When someone looks you in the eye and smashes all of your confidence or dreams, stare right back- unwavering- and show ‘em what you’re made of. I believe in you- do you?