When I Asked, “How Stupid Can You Be?” That Wasn’t a Challenge! 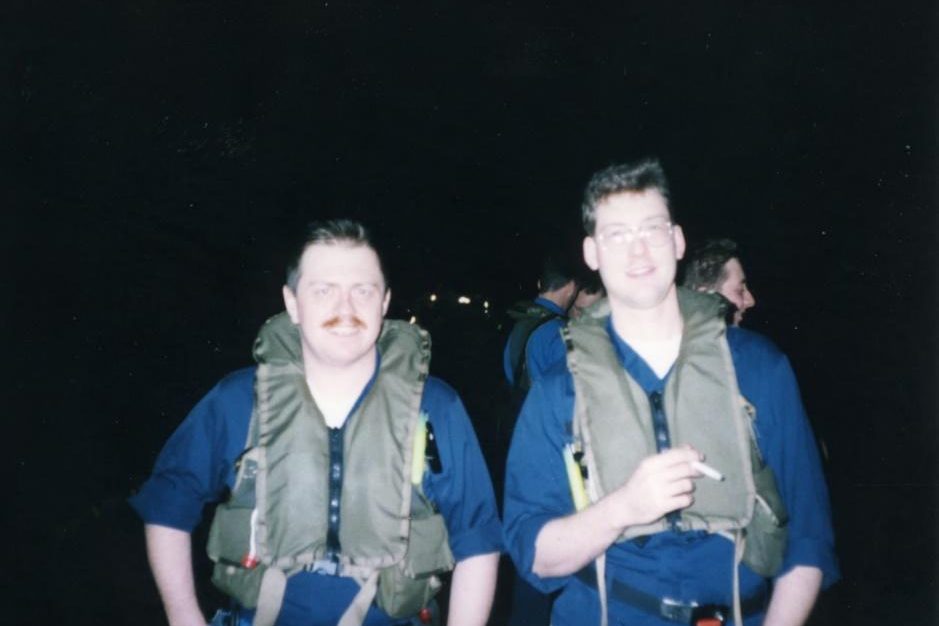 Welcome back to the scuttlebutt folks, that guy up above on the left is yours surly, a lifetime ago, (well, it would have been in about ’95, so yeah, a literal life time for some unlucky bastard that caught a round in the sandbox or the rock pile)

My shipmates and I are standing on the deck of the USS Florida in this shot, somewhere in the pacific… We could tell you, but then, oh you know the rest.

The reason we couldn’t tell you, was that we were, oh wait, never-mind, I can neither confirm or deny the presence or absence of nuclear weapons on board Naval vessels.  Now mind you, I’m not sure why in the hell we would bother to do SSBN Strategic Deterrent Patrols, if we didn’t have any freaking nukes on board, but hey, I don’t make the rules.

Anyway, the point of this, is we’re going to talk about Part two of the commentaries on politics; both national and international, and what we can and should expect from leaders; ours, and those of other countries.

This one hits a little closer to home.  In point of fact, it hits specifically on my home.  Let’s talk about ideology, and policy, shall we?

One of the BASIC jobs of Government, is to protect its citizens.  Surely, we can agree on that, right?  So, what do we mean by “protect”? Well, we should try to stop our citizens from being hurt by crime, ok, that means we need a police force.  We should try to ensure that our citizens don’t get hurt by natural disasters, OK, that means things like fire departments, and emergency management types.  But what about our citizens getting hurt by unnatural disasters?

Look, I get the idea that we want our policy to reflect our ideology, I think that’s a fine idea!  BUT, I don’t think it’s a fucking suicide pact!  My state (Washington) just announced a week or so ago, that the legislature was going to try to reverse a law put on the books in 1984 (prophetic year, that) that made it Illegal to study, plan, or even consider, defense against a nuclear strike!

I’ve asked several of the most leftist types I know, most of which were living here back in ’84, what the fuck the state might have been thinking, that they would pass such a law.  The best answer I’ve been able to get, was that it was a way of telling Ronnie Reagan that they (the state of WA) didn’t approve of his “Star Wars Initiative”.

Uh, WHAT?  So, let me get this straight sparky.  Because you don’t like what our president at the time is up to on the international relations front… I’ll note that there was and is some sort of philosophy that “defensive weapons” are by definition “destabilizing”, and “offensive weapons” are “grantors of the peace” (as long as they’re not “first strike” weapons, as defined by OUR ENEMIES) Someone explain this to me?  Protecting my citizens is liable to start a war, but having a weapon that can’t take out the enemy first, by HIS figuring, but must be launched as soon as you know he launched or it’s killed in the silo is a way to keep a nuke exchange from happening???  What moron thought this up?  Oh, never mind, the Soviet Union promoted it. (the same folks who had a very active civil defense system, including the one functional ABM system in existence for most of the cold war)

(Oh, and as an aside, I’ll note that the SDI and such were a significant portion of why I can now say “the Former Soviet Union”.  Gods that just makes my day, to this day.  The Soviet Union is second only to Mao’s China for mass murder, and the fact that I had a small part in killing that fucking beast is one of my proudest accomplishments.)

As I was saying, the fact that you don’t like the guy, or his politics, or just want to “make a statement”, makes you think that it’s a good idea to tie your emergency planner’s hands, from even CONSIDERING how one might mitigate a nuke attack???

Look, even in the height of the cold war, it was far more likely that we would have an accidental launch, or a special weapons accident, or a rogue nation/ rogue actor fire one or two weapons, than that we would have the total exchange from which only the unlucky survive.  Further, it’s entirely possible to survive anything short of a total exchange.  (hell, there’s a guy, Tsutomu Yamaguchi, that died Jan 4 2010, that survived being in two cities when they were nuked.  Yeah, that’s right, this poor bastard was in Hiroshima in time to catch Enola Gay’s gift, then was in Nagasaki when Bock’s Car came for a visit… In case you missed it, he died RECENTLY. IE, he lived a LONG time after the bombings)

So Yes, it’s possible to survive a nuke strike.  Now let’s consider that Crazy little bastard at the helm of North Korea.  Look, I’m not sure if he believes his own press or not.  I know a couple people that have been inside North Korea, (they were part of a band that was invited to do a concert on the other side of the DMZ) and I know a few guys that did a lot of time right on the DMZ doing the things that Uncle paid them to do… (they were in Army intel…)

The consensus of these folks is that even if Kim Jong Un doesn’t believe his own press, the rest of the country has bought into it.  They actually believe that 1) they are the victims, 2) We want to kill them all, and 3) they can defeat us, and fairly easily.  NOTE, they don’t have much against south Korea, because they were “perverted” by that great evil, the US…  Now sometimes he comes off as a true believer too, and sometimes he comes off as this very jaded bored little kid, that, if no one is paying attention to him, breaks shit, just so people will talk to him.

Which is the real Kim? Who knows.  It doesn’t matter.  What does matter is that either one of those Kims might be stupid enough to launch a nuke strike.  The mindset that would do such a thing, would not target a military target, any more than the ISIS twats target soldiers… No, they target 8 year old to 15 year old teenyboppers with a girl crush on some singer I had never heard of, until some worthless stain blew her concert to smithereens.  Kim’s likely target? Seattle.

In the unlikely events that he can get a rocket to work well enough to hit the broad side of the moon, if his launcher was in orbit around it, and that he can shrink a nuke enough to put it on the tip of said rocket, Seattle is where I would put money that he’ll aim.  South Korea he sees as “his”, just as soon as he gets rid of the US, they’ll join him.  He’s sure of it.  Japan? Maybe, but all the NoKo propaganda is against not the Japanese, but the Americans.  He might target Alaska, (he might actually be able to HIT that, it’s big enough…) but that wouldn’t get him the horror, and make us run in fear (in his twisted little mind) like a hit on a major city.

So that brings us back to, unless they vote to overturn the law, our Emergency Prep Guys can’t even think about what to do, and how to deal with a nuke strike by a madman.  Because they didn’t like Reagan? REALLY?

This is a complete and total abrogation of one of the few duties that actually fall in the wheel house of the government!  This isn’t “studying the viscosity of catsup” or “studying the love life of a south American tree frog”, or even studying how to get the people to support an income tax, (in the state of WA, income taxes are against the state constitution) so that you can have more money to fund studies with… (yes, your tax dollars have gone to each of those)

I expect better.  Nay, I demand better.  Mr and MS Congressmen, DO YOUR FUCKING JOB.  You can’t pass a budget (your principle job!) You can’t agree on how to fund education (per the state constitution, your main job in the budget) Hell, even with a special session, you can’t get your act together enough to pass a budget.  At least get rid of a law that forbids state employees from doing THEIR JOB.

Please, someone explain why we pay these lackwits.

OK, I’m out of here for the week.  Thanks for reading and see you next week.

I remain, yours in service, William Lehman.