Well, I guess we have to discuss it… 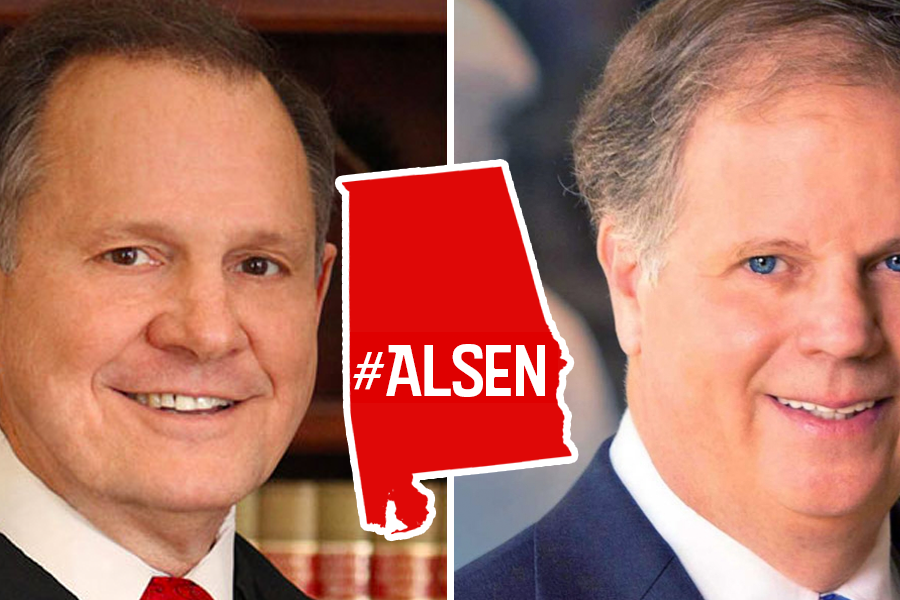 Well, it’s pretty much all you hear about from the nattering class, and as a political hack (among other things) I guess it’s incumbent upon me to mention the Alabama special election.

Wow, what a choice:

A guy who’s has been accused of sexually molesting teenage girls (more on that in a moment), was twice removed from office as a state supreme court chief justice, who claims to be a strict constitutionalist while at the same time defying the US Supreme court, a guy who seemingly rules from the bible instead of the law book…

A guy who believes Health Care is an inalienable right, and that the government should pay for it, who embraces the “soak the rich for everything they’ve got” concept, that supports ceding ecological and economic policy to the UN, a guy who seemingly is Bernie with a southern drawl…

Gosh, can I have what’s behind door number three? (oh, I should mention, both of these clowns opinions, as stated here, are from their election websites…)

Now, let’s look for just a second at the charges against Moore. None of them are newer than 30 years old.  I find it a little hard to believe that these charges weren’t trotted out during either of the times he ran for, and won, the election to Chief Justice, but suddenly when he became a senatorial candidate the “victims” found their voice.  Oh, the charges MAY BE true, but we have this thing in US law, called a “presumption of innocence”.  (unless you’re a conservative accused by the left, then we use a different standard called “Trial by media”.)  All of this is just a little too convenient for me…

Sort of like the woman who’s a secretary for the Clinton Foundation, and a close friend of Hillary’s that’s now accusing Trump of accosting her…

Now that doesn’t mean I’m a fan of Moore.  I hold a very strict belief in the separation of Church and state… (on the other hand, it’s sort of ironic that the SCotUS, the people that told Moore to get rid of the ten commandments statue, has, carved on the doors at the main entrance to the courtroom… wait for it… the ten commandments.)

Still, Moore is a typical Alabama politician, remember Alabama gave us Governor George Wallace, who also thought that he was more important than the law, and Alabama was a big fan of the whole succession thing… You might say they have “telling Washington to fuck off” in their DNA.  I sort of have a problem with electing as senator someone who flaunts the law as if it didn’t apply to him.  Who seems to want to stop even civil union between gays, because “the bible”, etc…

Look, this old squid is radically libertarian (note the small L, the party with the same name is a bunch of morons) who believes that as long as you don’t hurt anyone else, you have the right to go to hell in your own way, without the government sticking their nose in.

In case that isn’t clear enough, I believe that any of the LGBQT (and any other freaking letters that are the new “thing”) MOUSE that want to get married, GET to get married… By the same token, any clergy or faith gets to say, “we don’t believe in that shit, and we’re not going to perform that abomination.”  (see, “church and state” is a sword that cuts both ways, bitches.)  And any person that finds that repugnant shouldn’t be forced to participate.

So yeah, Moore is a bit too much for me.

His opponent on the other hand…

Well Southern Bernie, is as scary a piece of socialist (read Communist with a smiley face, and a hand shake while they take everything you have) shit as has ever been elected to the Senate chambers.

Is it any wonder that the turn out was abysmal, and a WRITE IN vote got nearly two percent?  My Gods people, even in Alabama you couldn’t find a better pair of candidates?  Really?

So, the talking heads are trying to read shit into this election, and use their crystal ball, to show that “based on this, the Republicans are screwed in the midterms”.  Permit me to doubt that just a little.  This was not a landslide, (in fact it’s probably going to be going to a recount) in spite of a SERIOUS full court press against Moore, who was a horribly flawed candidate that only a Fundamentalist Christian could love.

At least one talking head that mentioned the concept that Moore losing was actually a good thing for the Republicans; as, if he had won, he would in effect, be on the ballot in every election of 2018.  I think that might be a little strong, but I can see the point.  If I was running Democrat in a state that isn’t the buckle of the bible belt, I would make a big deal of all the Fundie positions Moore brought to the table, and try to tar all Republicans with that brush.

I’m not sure why our elections lately have been choices between two candidates that I couldn’t put in a novel, without being laughed at… Seriously folks, can’t we do any better than this?