Welcome to the Scuttlebutt! 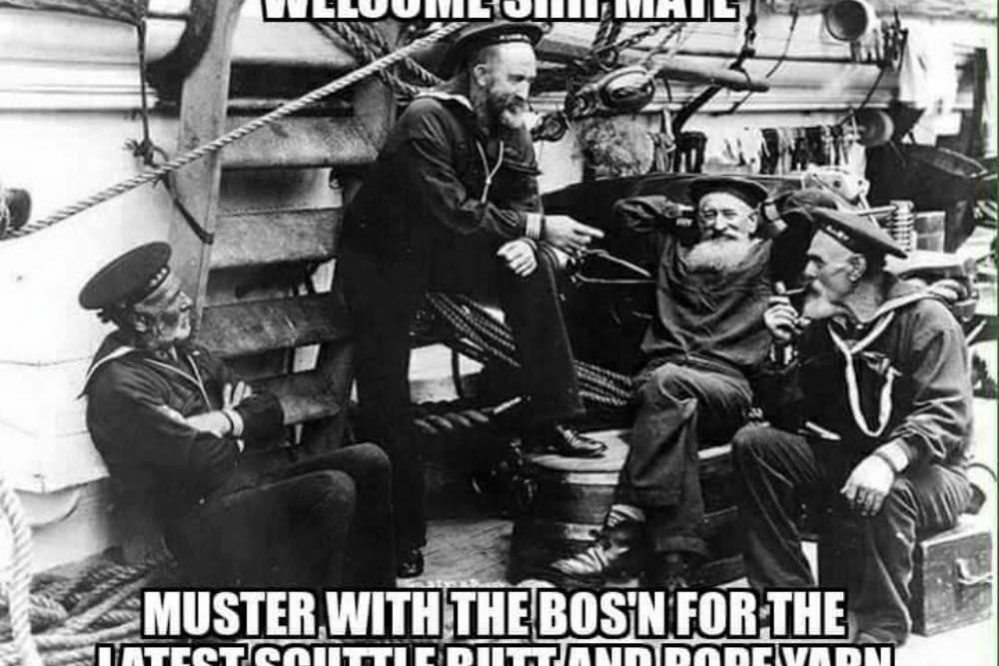 So, first off, let me make sure you understand what you’re getting into.  Nothing is sacred here,  No topic off limits, and after 20 years on submarines, ten as a cop, and 17 as a shipyard worker (in case you’re doing the math, there is overlap on those, I’m not quite Methuselah) I have a deep and abiding love of alcohol, an evil sense of humor, some bad coping systems, and a real low tolerance for stupid shit.

Now let’s begin with some thoughts on a passing scene.  Yesterday (yes this was pre written, when you see it, it’ll be “last week”) during the candidate hearings for supreme court justice,  Senator Cruz exchanged a joke with Neil Gorsuch regarding Douglas Adams seminal work Hitchhiker’s Guide to the Galaxy, to lighten the mood a bit.

Well, in a desperate attempt to Virtue signal, the self proclaimed news source for all things Geek “io9” immediately blew an ass gasket.  It seems that conservatives liking something automatically “ruins it” for “all right thinking people”.  I mean DAMN! Really? The left has gone so freaking rabid that the very fact that someone like Ted Cruz likes something ruins it for them?  People, you seriously need to examine your value system.

Look, a good meal is a good meal even if Joe Stalin liked it too, right?  At least that’s my belief, if you believe, and I mean really believe, that a bad guy liking something automatically makes it messed up, lefties, I have some bad news for you.  Adolph Hitler was a Vegetarian!  Yes, the only guy in the world that was ACTUALLY “literally Hitler”, was a vegan!  So either you’re perspective is all messed up, or you need to rethink your dietary choices.  Dwell on that shit for a second, I’ll wait.

Back yet?  Good.  Because we need to take this concept a little further.  We’ve got senators proclaiming that they’re going to filibuster Gorsuch, before his Q&A period is even complete.  This is in spite of the fact that the National Bar Assoc. and all the other legal groups, etc say that Gorsuch is “Ideally qualified”.  Now if the Bar Assoc., the Pacific Legal Foundation, hell, even people like Georgetown Law professor Neal Katyal (a very prominent liberal and senior member of the Solicitor General’s office under Obama) endorse the guy… Well, the only reason that I can believe to stand against him, is that the Republicans are for him.

If it’s come to this, if a conservative can’t even be a fan of a well loved and very liberal book series without the liberals suddenly hating it, if we can’t find common ground on someone as universally acknowledged as a leading legal mind as Gorsuch can’t get a pass… Folks, we’re in trouble.

If we can’t come together on things like basic science fiction literature without making it a shibboleth, we’re headed for that most miss named thing in the history of oxymoron, a civil war.

Then you get to this new play that the NYT is hawking in the paper on the 27th of March issue.  A nice little rage piece called “Sweat”, in which the author & director, one Lynn Nottage, who allegedly did “probably too much research” (according to the NYT reviewer) proceeds, as a New York Liberal, to explain to the other New York Liberals, why those stupid bastards in flyover country are so mad, and so stupid, and so unreasonable, and how they should be pitied really, because they’re so stupid and so unreasonable, and the world they knew is dead and they don’t understand it…. And that’s why they elected Trump.

Here’s a thought darlin’, you want to know what’s going on in our heads? Ask us!  Try talking to us, instead of at us.  If your friends and the rest of the coast liberal establishment wants to know why we are angry with what and how our country has been going, try having an actual conversation with us.

I would say “open a dialog” but that is liberal speak for “shut your mouth and listen to what I have to say, your opinion isn’t important.”  That’s how we got here.  There’s an old joke, “How do you tell if someone is a Vegetarian?  Don’t worry, they’ll tell you!”  And that’s the issue here folks.  The Right is listening to the left, and saying “OH HELL NO” and the Left is telling the Right what they mean when they say something, instead of asking them what they mean.  (hence the whole “Oh that’s a code word for ________)

Here’s the thing buttercup, we don’t do code words, and we generally don’t mince words.  If we think you’re a stupid damn (fill in racial or sexual characteristic here) we’re usually going to just up and say it.  It’s not a judgment on your race or sex, it’s a judgment on YOU.  For example,  the best damn officer I ever worked for was a black woman.  The absolute worst piece of shit I ever had to deal with? Also a black woman. Fortunately the bad one was a civilian, because if she had been military she would probably gotten thrown overboard one night.  The folks that are so desperate to make sure that this minority, or that minority gets special consideration, don’t seem to understand that in effect they’re saying “oh you poor thing, you can’t get anything on your own, let me help you.”  This lets them feel superior I suppose, and to have been seen to have “done something.”  But in reality, what it does is say “you can’t get there unless I give you a break, now you owe me.”

Oddly that system of patronage broke, this election, and a whole herd of folks said “I don’t care if he is a con man, at least he’s not a professional politician, and he’s NOT HILLARY”.    A wise organization would be doing a lot of self assessment, and figuring out where they went wrong, that they couldn’t even beat Trump… But not the beloved left, oh no, they’re busy doubling down on the same old same old, and convinced that it’s just that the country side is too stupid to know what they want.

So let me help you out just a little bit there zir (one of the chosen pronouns for one of the “50 sexes”, which is itself a laugh)  You want to get relevant again, here’s how:

1) Drop the anti gun stance.  That single item kills more politicians than having dirt on a Kennedy or a Clinton (and that’s going some).  Gun ownership is at a higher percentage than ever in modern history, and yet gun violence is at an all time low.  Figure out that you’re just not going to win on that stance, outside of the enclaves that would vote for an arthritic monkey if it was running on the democratic ticket. (you doubt me? Looked at Pelosi or Feinstein lately?)

2) Lower the Pro abortion rhetoric just a little.  You can still support it and survive, but even people that are either on the fence, or support it for libertarian reasons, can’t get behind the government paying for it or having it in the third trimester.

3) If you really want to make a statement, start looking at something other than taxes to fund all your pet programs.  Now I realize this one would be difficult, but maybe, just maybe we don’t need a Department of Education SWAT team, and we don’t need to make the military fund studies on the mating life of some South African fly, at the same time that we’re screaming that the military is getting too much money.

(And before you scream that there’s all these good reasons to study this fly, because disease, and poor people and… Yeah, that’s nice, and it would be nice to do it, you should sick the UN on that.  It’s not the job of people who get paid to kill people and break things.  The military gets paid to be so good at killing people and breaking things that people won’t screw with us for fear we’ll “loose the dogs of war”. Nowhere in there does “helping poor countries in Africa to control their disease vectors show up)  The military could live within their budget if it wasn’t for all the bullshit non warfighting related crap that gets paid for under the military umbrella.

So there’s three things, but the biggest, the absolute cherry on the banana split of voter anger? Just listen.  Don’t try to interpretate, don’t examine for hidden meanings and code words, and DON’T TELL me that I don’t know what I really need or want.

OK, that’s about all for today, and we’ve wondered pretty far afield.  Not all of my columns will be this wide ranging, some of them will be about the geek community (I am a science fiction and fantasy author, with two books currently out.  Harvest of Evil,  and Keeping the Faith; both on amazon, under my name) some will be about hunting or shooting, some will be about the military or the latest stupid thing done by some poor bastard in uniform, and some, like this, will be a bit of a mixed bag.

I remain yours in service, William Lehman.