We Told You So 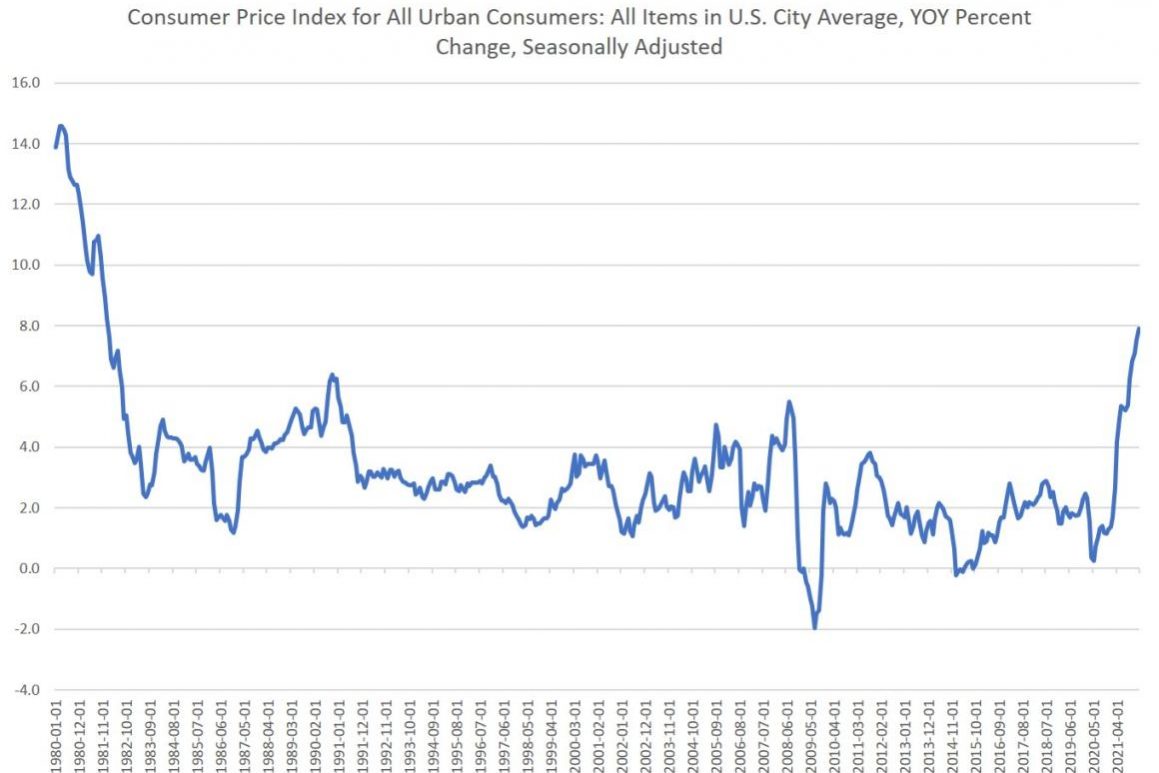 Welcome back to the Scuttlebutt, pull up a chair, and have a drink, while I can still afford it.

When the idiots that run my state and the rest of the nation wanted to raise the minimum wage the folks on the right said, “if you do this, prices will go up, you’ll see inflation eat all of that raise and MORE.”

They laughed at us, and said: “You just don’t understand how this works.”

When they basically cranked up the printing presses to make more money to hand out to people, on the excuse that “well, COVID!” printing money like it’s going out of style, and handing it out like a drunken sailor at a stripper bar, we said, “DUDE, increasing the money supply without any increase in productivity (in fact with a significant decrease) is going to cause massive inflation!”

They laughed again, and said: “This is the new economy, old theories don’t work anymore.”

And over in the corner, the Gods of the Copybook Headings laughed bitterly and said: “well, it’s time to go play again.” (if you don’t recognize the reference, go here: https://www.kiplingsociety.co.uk/poem/poems_copybook.htm it will do you good, everyone should read Kipling, he speaks some universal truths.)

Well, now we’re reaping the fruits of that stupidity. Jen Psaki (AKA Peppermint Patty, Biden’s spokesperson, and cleanup girl, she who has to do damage control every time that advanced Alzheimer’s case opens his yap) Warned us this week that we “should expect unusually high inflation numbers when the Consumer Price Index report is released.”  Since it’s been running over 8% already, well…

She then proceeded to blame Putin for the whole thing, completely ignoring the fact that Putin’s war is only one month old, and the inflation rate has been shooting up since a month after her boss got into office. Further, she claimed that: “Because of the actions we’ve taken to address the Putin price hike, we are in a better place than we were last month, but we expect March CPI headline inflation to be extraordinarily elevated due to Putin’s price hike,”

Look, who are you going to believe, Peppermint Patty, or your own lying eyes?

“We expect a large difference between core and headline inflation, reflecting the global disruptions in energy and food markets,” she added, noting that core inflation does not include energy and food data while headline data does.

Sure, because no one cares about gas and food when we’re looking at the CPI!

Then she goes on to tell us that: “I will say that anytime there’s heightened monthly data or inflation reporting or numbers, it is a reminder to us, to our allies on the Hill and hopefully to many of the American people that we need to do more to reduce costs for the American people. We have, of course, legislation that could do exactly that — cut the cost of childcare, of healthcare, of eldercare,” she claimed.

Note that 1) the list of legislative cures doesn’t include fuel or food, and 2) that her “cures” all involve the federal government giving people money directly or indirectly to “fix it.” Printing money to “fix the problem” is how we got here in the FIRST place.

TED CRUZ: “The White House has had five separate lies on inflation.

“Their first lie was: ‘It’s not happening. Don’t believe your eyes. There’s no inflation.’

“Their fourth lie was: ‘It’s happening, it’s not transitory, it’s not high-class, but it’s a good thing. It’s a sign of how great the economy is that you can’t afford to pay for your groceries or put gas in your car.’

“Then lie number five that every Biden apparatchik is repeating: ‘Putin, Putin, Putin.’ They decided politically, let’s blame this trainwreck of a Biden energy policy on Vladimir Putin. You know what? The gasoline prices had risen 48% before Putin invaded Ukraine. As the sticker says on the gas pump. ‘I did this.’ Joe Biden did this.”

Hell, even NBC, which usually hauls water for any Democrat with a pulse, states:

Over the past year, which is closely aligned with Biden’s White House term, the Consumer Price Index has climbed rapidly.

Those increases matter a lot, especially to those with lower incomes, who feel as though they are falling behind. Furthermore, the price increases have been across the board, on cars and gas and groceries to homes. If you’re spending money, you’re paying a little more for almost everything you’re buying.

On the Putin front, WOW when you run Russia into the law of unintended consequences, Vlad, you don’t fuck around, do you?  Russia’s excuse for invading Ukraine (version 5 or 6, I’ve lost track) is that “we had to, they were going to join NATO and it was just a matter of time before they invaded us, this was a defensive attack.”

Well Vlad, in all the time that NATO has existed, have they EVER invaded anyone?  Hell, you’ve had NATO forces directly on your border since 2004 (Estonia, Lithuania, Romania, Slovakia, and Slovenia.) as well as Poland sitting quite close (NATO member since 1999) with only your puppet state of Belarus sitting in-between you and them. Has there been any sign of an invasion during that time?

But, now, through your behavior, you have Finland and Sweden scared enough of you, and witnessing that NATO will not go to war for a non-member, that they’re filling out paperwork! https://www.yahoo.com/now/finland-sweden-could-apply-join-122631929.html

Finland has a long history of hating Russia, see they started off life as a portion of the Kingdom of Sweden, who thought they were independent… They tried to force the issue in 1809, and Sweden ceded them to Russia, where they were the autonomous “Grand Duchy of Finland.”

Well, that lasted until 1917, when they declared their independence.  Russia didn’t much care for that and fought two wars over it.

The Finnish Defense minister was quoted recently as saying “we already have thousands of Russian troops in Finland, just inside the border, six feet underground.  We do however have room for more.”

Until recently the Finns and the Swedes were happily “nonaligned, in favor of NATO.” Which translated as “we don’t particularly like the USSR, or Russia, or whatever they’re calling themselves this week… BUT we understand that being NATO members on their border makes them nervous, so, just to be good neighbors, we’ll refrain.”

Now they’re looking at Ukraine and thinking “that fucker’s crazy, and we’re probably next on his list, HEY NATO, mind if we join the party?”  Much like the Biden gas pump sticker, this is Vlad pointing and saying “I did this!”

I could go on, with Elon Musk and the Twitter fun, Biden’s bullshit “Ghost gun” speech, the Sacramento mass shooting that suddenly disappeared from the news once it turned out that it was Black gangbanger on Black gangbanger shit, or the NY shooting that also turned out to be Black liberal on Asian violence and thus is destined to be buried, but I’ve beaten up the liberals enough today.

I’ll leave you, instead with a quick review of Morpheus.

I had never heard of that character when I went and saw the movie, I only knew it was in the “Spiderman” universe because I saw the banner of the “Daily Bugle” and recognized it.

So, I can’t say if it’s true to the comic books, but it was fun, the effects needed the big screen, the story was good, and they didn’t “woke” it up much.  I’ll give it a 3.5 bullet rating.  You don’t have to go see it TODAY, but if you like Marvel at all, it’s worth the trip, I recommend the matinee though.