We Forgot How to Laugh at Ourselves 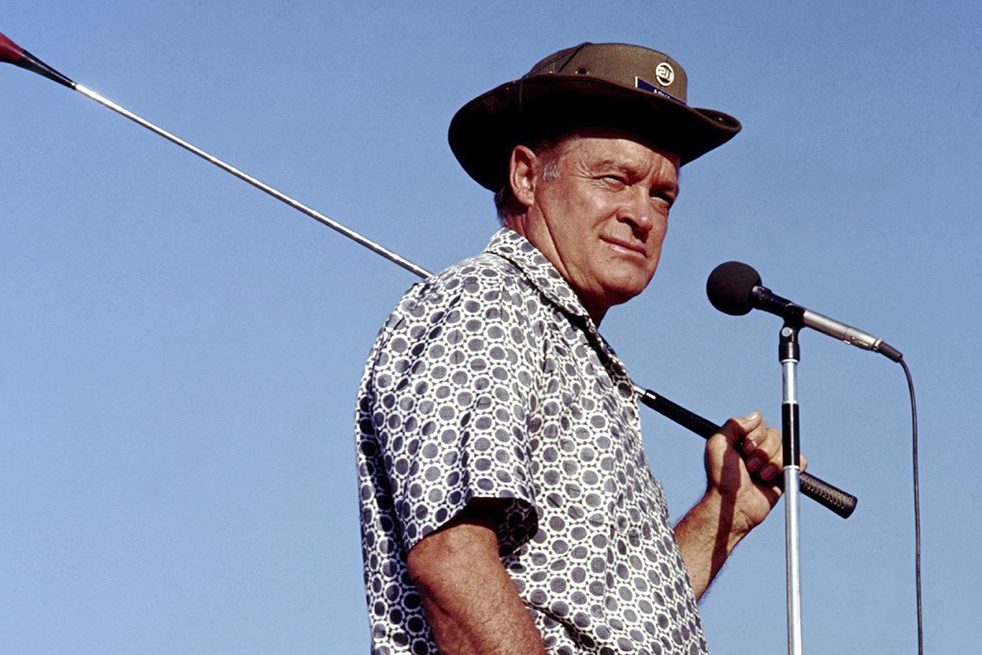 Pull up a bucket, pour a cup, lets chat.

I considered doing a piece on some of the stupider ideas that are now in vogue for Democratic presidential candidates, but it’s been a rough day, (looks like I’m going to have to tear out the upstairs shower to fix a plumbing leak.  I HATE plumbing, it’s why I chase electrons instead.) and frankly I can do without the extra aggravation that discussing that topic will bring.

Oh, and by the way, is there anyone left who ISN’T running for the Democratic nomination?  Seriously? I did hear that the ghost of Che Guevara was told not to run, seems he’s too far right, and thus doesn’t stand a chance… Bada Tiss.

Which brings us to old Ski-jump nose up above.  If you’re too young to remember Bob Hope, I really feel sorry for you.  He was a class act, and maybe the last one (well, Robin Williams had his moments…)  Bob was the heir of a long line of political humorists, that were ACTUALLY FUNNY. We’re talking about people like Milton Berle, Will Rogers, Samuel Clemens (Mark Twain) and Groucho Marx.

Here’s the thing folks.  Those guys were funny for two reasons. 1) they never took sides. Let me explain that… Oh all of them took shots at whoever was in power, and whoever was running, but that’s the thing, they took shots at WHOEVER WAS RUNNING.  They were bipartisan, they screwed with both sides evenly. 2) They were never MEAN about it.

The average of what passes as political humor these days, on BOTH sides, is mean as hell.  It seems to be meant to “fire up the Base” of whichever side they’re partisan for, and flat fucking piss off the other side.

Now Ol’ Bob up there, (Oh and in fairness, Johnny Carson may have been the last, not Bob) He hung out with, played golf with, rode in Air Force one with… and so on, every single president from Ike on.

Why? Because he wasn’t mean about it.  He could make fun of LBJ’s accent, or Jerry Ford’s clumsiness (little known fact, Jerry Ford, painted by the press as the clumsiest man on the planet was a football hero that turned down jobs after his bachelor’s degree to play pro ball for the Packers and for the Lions.  You don’t get those offers if you’re a clutz) and do it in such a way that the butts of his jokes laughed along.

Can you possibly imagine Steven Colbert doing one of his routines about Trump in front of him, and getting a laugh? Yeah, I didn’t think so, me either. Or Amy Schumer? See that’s what I’m speaking of. What passes for humor these days is as partisan as everything else, it’s meant for one side of the spectrum and to piss off the other side.

Folks, this shit’s gotta stop.  Don’t underestimate the healing power of laughter.  People LIKE to laugh, and you just can NOT stay mad and laugh at the same time.  If our republic is to stand, we MUST learn to laugh with each other again, instead of AT each other.  Political humor is far older than our nation, hell I believe I’ve seen graffiti jokes about Caesar. But the secret is to make it actually funny.

Currently everything from our news sources to our humor to which TV show we watch and which science fiction novel we read seems to be designed to further our split into left and right, and to ensure that there is no middle.  That sort of shit leads to raids on arsenals and attacks on forts. It doesn’t end well. Let’s go back to jokes about Trump having to trade down and slum by flying Airforce one, or how it was so cold this winter that someone saw Bernie with his hands in his own pockets.