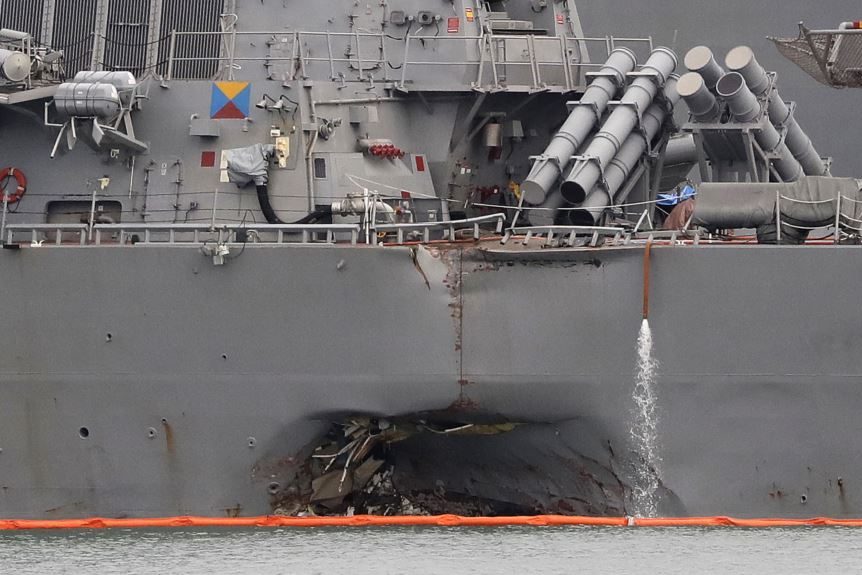 On to the continuing story of the trials and tribulations (and I do mean TRIALS) in Seventh Fleet.

Apparently, the investigation, while not complete, is done enough on the McCain to determine that the collision was “preventable” (that means we screwed up) C.O. and X.O. have been canned. Task force 70, and DesRon 15 also got the axe, and I’m not sure that’s the end of it, we may see more top heads roll, like the Vice CNO.

The CNO has put out a long missive to the effect of “our junior officers and chiefs need to step up and fix this shit.”  No that wasn’t his wording, but that was his point.  He went on to talk about the lack of leadership the JOs are getting from their seniors saying that “We have robbed our junior leaders of the ownership they so crave. We have smothered their initiative. We need to give it back — it’s why they joined the Navy.” (those are his exact words).

So, reading between the lines, and adding other things in the missive about going back to plotting skills on paper, etc… Stop overloading the JOs with so many collateral duties and bullshit paperwork, and other comments of that nature, it looks like a return to the days when yours surly sailed the waves.  We’re going back to being sailors, instead of being Managers, and Stewards of this and that.

With all due respect sir, it’s about GOD DAMNED TIME.  Damn shame we had to kill 17 fine young sailors, and wreck two ships that we can’t afford to lose, for you to get your, and the navy’s head out of the politician’s asses and back in the game.

Our job is to sail ships, track contacts, and to destroy the enemy wherever they are. It’s not our job to worry about Great Green Fleets, Social Engineering, the latest gee whiz gadget that some clown decided will be “transformational,” or making sure that the politicians that hate us and the liberals that want us gelded hate us just a little less.  We’re staring down the barrel of possible real live naval shooting wars with the Piss-ant from Pyongyang, and the Chinese who seem to want to recreate the “south east Asia co prosperity sphere” but with themselves in the starring role.   It’s time to get back to being the scariest bastards on the ocean, instead of scaring any merchant that gets near us, for fear we’ll do something stupid.

Well, that’s what it looks like from the Sonar Sup’s chair.