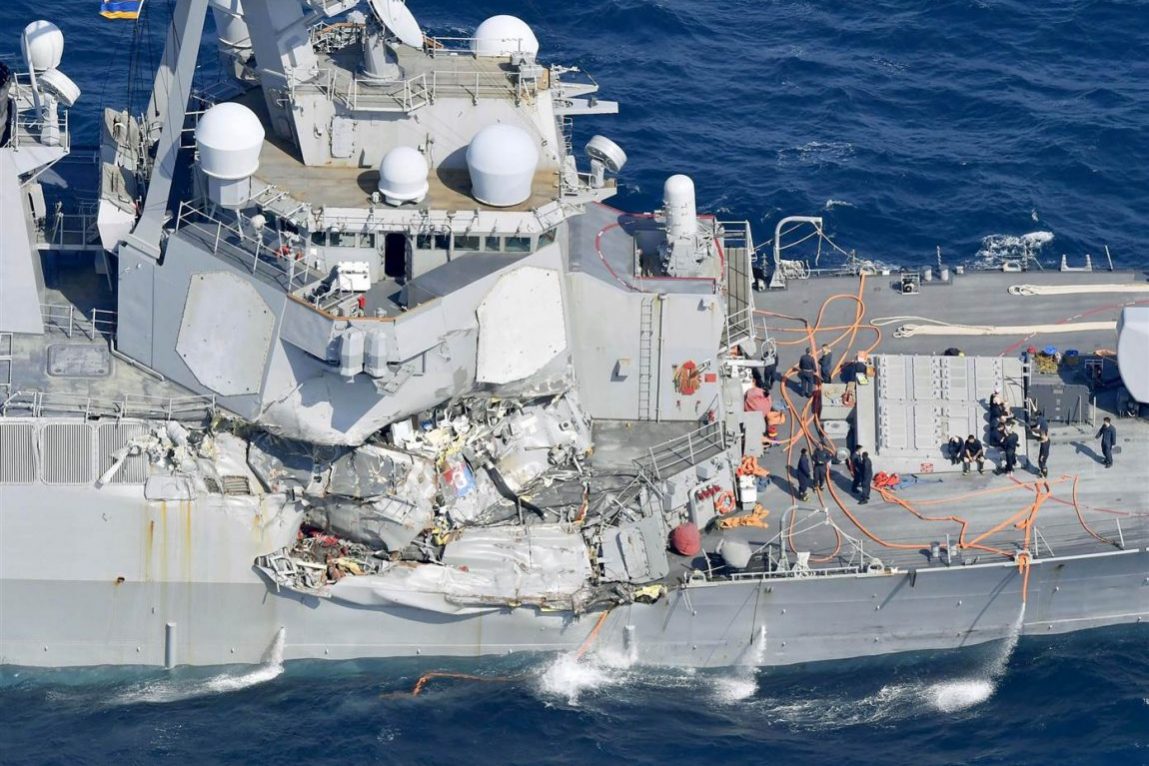 Welcome back to the scuttlebutt folks, we’ve got some fleet stuff to talk about today, so pull up a bucket to sit on, grab a cup a joe, and let’s get started.

As a sailor, I would probably lose my shellback and bluenose cards if I didn’t discuss the Fitzgerald.

First, let me recognize the heroism of FC 1 Rehm Jr.

P.O. Rehm’s heroism was in keeping with the finest traditions of the Naval service. After freeing twenty of his shipmates from the flooding berthing compartment, he returned to retrieve the last 6, knowing full well that at any point the crew might have to dog down the WT doors to save the ship.  He may in fact have been the one to dog down the hatch himself, for all we know.  This much we do know, he was found in the flooded compartment with the last of his shipmates.  Greater love has no man than that he lay down his life for his fellow man.  I am humbled to have served beside such men as him.

Now let’s talk about the collision itself.  “The captain of the ACX Crystal said the container ship flashed lights toward the USS Fitzgerald after it “suddenly” began heading on a collision course near Tokyo Bay on June 17, Reuters reported, citing a copy of Ronald Advincula’s account to Dainichi Investment Corporation, the ship’s owner.” The map above shows the track of the Crystal.  We know that the collision happened about a half hour before the Crystal reported it. (Fitz’s radio was knocked out by the collision, they were eventually able to make contact via Cell phone) The collision took place about where the second doubleback is indicated.  From the damage, the Crystal hit the Fitz, not the other way around. And hit the Fitz at a pretty broad angle on the bow.

Now there’s a hell of a lot that we don’t know.  Some of which we probably never will.  Why it took Crystal ½ hour to notice she had collided with a destroyer, when the captain claims he sounded danger signals, why all the maneuvers (merchants generally go “most economical course and speed” anything else wastes money.)  Why the Fitz didn’t see the Crystal.

An initial report from the family of a Fritz crew member claimed the Crystal was running lightless and maneuvered to hit. That’s a damn interesting claim.  The CO of the Fritz was never wakened from his cabin, why?  Here’s a thing, in a service which has way too much “relieve him first, and investigate later”, “zero defects” mind set, no one has been relieved.  This leads me to believe the brass knows something they aren’t saying.

The area where the collision occurred is busy as I 5 on a Friday afternoon, and I’m sure that was part of it.  But here’s another thing, we in the navy have been known to be at “emcon 1” before… (electromagnetic control condition 1, means NO radio signals leave the ship) in conditions like that, the only radar that might have been operating would have been a commercial Furuno, as carried by every damn ship, fishing boat, larger sailboat, and skiff in the freaking world.  The reasons to go emcon are to avoid being IDed as a US Navy warship, or even to avoid being IDed at all.  Who or what else was in the area, was the Fitz on an exercise, or was she chasing someone (Chinese sub? NoKo vessel? Gun runner?) or what?  Anyway, that’s A possibility for why she didn’t realize she was about to be hit.  Yes another possibility was an incompetent crew, but as the Fitz was out there as one of the ABM ships, that’s doubtful. Possible, but doubtful.

All this is really broad speculation.  There’s a shit load of conspiracy theories out there, some plausible, some so far out in left field, they’re across the foul line, and up into the bleachers…. I’m going to wait and see what the investigations by the USN and the JDF reveal.  The Crystal was owned by a Japanese firm, flagged P.I.  The Japanese have a vested interest in making sure that the right party gets hung for this, and are really good at finding the right party (it’s an honor thing for them) I’m willing to give them a chance.

Now, let’s discuss the other Navy related item in the news, this one might have escaped your attention, if you aren’t as much of a space nerd as I am.  The USAF has established the “space service”, and laid claim to the role of running America’s space forces.

The Air force has great experience with missions lasting up to 18 hours. Hell, even some lasting up to 24 or even 36 hours… A trip to mars is going to last months at least (at first).  AF gear is used to 400+ hours of maint. For every hour of flight time.  Navy on the other hand is used to 6-9 months in a steel can, professionals who live, operate, and fight in that steel can, combining specialists in 50 plus disciplines in ways that work, and doing things like giving an E-3 with 9 months in the Navy the wheel of a Trident Nuclear Submarine, on Strategic Deterrent Patrol ready to launch WWIII.

Still, I’m prepared to be magnanimous, AF, you can have LEO and below, (except where Navy Birds are flying, or USMC birds) but deep space, that’s our shit.  We have the experience working that sort of mission, you don’t.  Oh, and before you bring up “but we know how to operate in 3 dimensions, you operate on the surface” Submarines and ASW Warfare baby.  Frankly a submarine is the closest to a deep space ship existent in the world today, and operates in a far more dangerous environment, so space would be easy.

What’s that you say? Yeah, you in the back, in the gas station attendant uniform.  Oh sorry Major, I didn’t recognize AF class “A”… anyway, your comment?

“How can submarines be more dangerous than space, space has no atmosphere?”

Exactly, Space has no atmosphere.  So, you’re dealing with a 1 atmos. DP. (actually less, because they don’t pressurize the space craft to 1 full atmos.)  On a submarine, we’re used to dealing with high double digits atmosphere DP.  A leak on a submarine doesn’t cause “HISS SQUEEL” it causes water to come in so hard it cuts through bulkheads.

OK, any more questions from that great alternative to military service?

Doesn’t look like it, and I’m sure I’m going to need to start ducking rotten tomatoes from the junior birdmen any second, so I’m out of here.

Folks, stay safe, and I’ll see you next time.