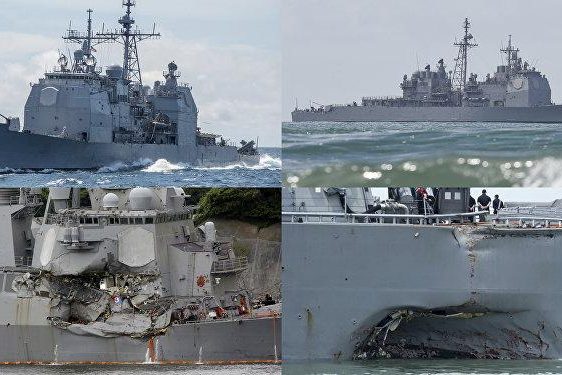 There’s a thousand other things that I would prefer to write about today.  I went and saw Thor Ragnarok over the weekend, and I would love to do a review.  It’s fun work.  But sadly, the biggest part of being an adult, is doing what needs to be done, not what you want to do.

I put up a special edition on the recent unpleasantness the Army went through, if you missed it, here it is: http://thehashtag.us/an-injustice-in-the-bergdahl-sentence I can hardly ignore the 800 lb gorilla in the Navy living room.  If you haven’t seen the report, here it is, from the CNO (for those of you that aren’t Sea Service types, that’s Chief of Naval Operations, the head admiral, the big cheese):

Let me boil it down for you:

On the McCain: Loss of situational awareness in response to mistakes in the operation of the JOHN S MCCAIN’s steering and propulsion system, while in the presence of a high density of maritime traffic. Failure to follow the International Nautical Rules of the Road, a system of rules to govern the maneuvering of vessels when risk of collision is present. Watchstanders operating the JOHN S MCCAIN’s steering and propulsion systems had insufficient proficiency and knowledge of the systems.

In short, we, the Navy fucked up the most basic shit we do, killed a lot of kids, and wrecked two ships because we had our heads so far up our asses we were looking out our rib cages.

Now, that being said, the ships that hit us fucked up by the numbers as well, but that’s no excuse.

As I’ve mentioned before, there were some moments of tremendous heroism on the Fitz, and I will take nothing from the men who showed that.  But as a Navy, we stunk up the place, and in a place where we can ill afford to do that.  When we do shit like this, it makes other Navies (cough China, cough North Korea) think (and they have both written such in open documents) that we’ve lost it. That we are so damn incompetent we couldn’t fight a navy war if our lives depended on it. (Hint, they do.) Do I think that’s actually the case? No. But to an outside observer, it’s easy to draw that conclusion, and it makes “adventures” more palatable, and more likely.  That’s never a good thing.

Here’s a money shot for you from the Fitz: The crew was unprepared for the situation in which they found themselves through a lack of preparation, ineffective command and control, and deficiencies in training and preparations for navigation. FITZGERALD officers possessed an unsatisfactory level of knowledge of the International Rules of the Nautical Road. Watch team members were not familiar with basic radar fundamentals, impeding effective use.

Damn.  That’s the basics, it’s the equivalent of getting in front of the ball in baseball. And it goes on, and on… Suffice to say, this ship couldn’t get out of it’s own way.

The McCain was just as bad.  They failed to follow the standard rules for how to transfer steering, failed to set the Sea and Anchor detail early enough, failed to recognize, when the CO switched the helm that it had been switched, failed to communicate within the ship control team that they had so much current they were running with a 3 degree lee helm, failed to recognize that the throttles weren’t ganged together, so when they slowed, they only slowed one shaft, thus turning due to the imbalanced shaft RPM between port and starboard, in short, THEY FAILED.

Here’s a money shot from their report: Although JOHN S MCCAIN was now on a course to collide with ALNIC, the Commanding Officer and others on the ship’s bridge lost situational awareness. No one on the bridge clearly understood the forces acting on the ship, nor did they understand the ALNIC’s course and speed relative to JOHN S MCCAIN during the confusion.

“Lost situational awareness.”  That’s milspeak for “they had no idea what the fuck was happening”.  That’s bad when you are driving a car, much less a 500 foot long multi billion dollar warship!  Again, they weren’t the only ones to screw the pooch, the Alnic (the ship that hit them) also failed in their duties, but that’s sort of irrelevant.

When taking control of steering, the Aft Steering Helmsman failed to first verify the rudder position on the After Steering Control Console prior to taking control. This error led to an exacerbated turn to port just prior to the collision, as the indicated rudder position was 33 degrees left, vice amidships. As a result, the rudder had a left 33 degrees order at the console at this time, exacerbating the turn to port.

Several Sailors on watch during the collision with control over steering were temporarily assigned from USS ANTIETAM (CG 54) with significant differences between the steering control systems of both ships and inadequate training to compensate for these differences.

Put all of this together and you get a story I’m hearing all to often from my shipmates still on the boats and ships.  We’re so strapped for trained and qualified people, due to 8 long years of mismanagement and abuse of the navy, that guys are doing back to back to back westpacs (those are 6-8 months each) because no one else is trained to operate or fix the gear they own.  So the boat comes in, and they go out on the next boat back to the same place.  This is completely unsat.

There’s several more pages I could write about the various errors, from the Qual POs not knowing the systems they’re training people on, to the CO ignoring the recommendations of the entire rest of his Command and control team.

I am yours in service