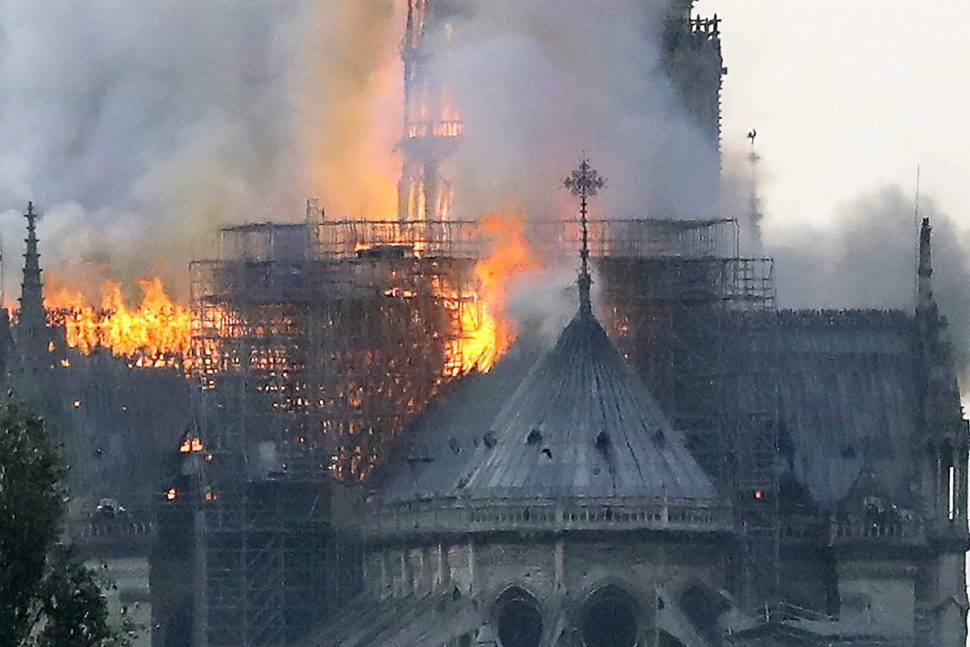 Or fill in the deity or anti-deity of your choice… I was at work, and deeply involved with what I was doing when one of the guys that work for me said something about Notre Dame being on fire.  As I slowly surfaced from my work trance (when I’m in the middle of something I can get very single-minded) I asked what he was talking about, then went on the web and looked…

And yet, today, I honor the French, and their crown jewel, the cathedral at Notre Dame.  As I watched the videos I nearly cried. Of course, I’m still pissed about the library at Alexandria, so there’s that. One of my acquaintances said something about someone having saved the Holy Sacrament (or something like that, sorry I can’t speak with intelligence on the Catholic religious mysteries.) and I replied that while I was glad for their sake, what I cry about is the work, the artistry that was going up in flames.

When this church was made, men were still willing to spend most of their life dedicated to making something that would last through time immemorial, to honor their God.  Generations of woodworkers and stone masons toiled until they were crippled, making this monument. The art and the carvings were not just where you could see them, drone flight videos show that there was virtually no place that was not carved, no place too hidden to be worth special attention.

If there is a Devine being or beings (and I believe there are) they could not be unmoved by the level of dedication and work, whether the workers got the Gods’ names right or not.  I read the next morning that the damage was not nearly as bad as feared and that the process will be one of “repair” vice rebuilding. For that I am grateful. Such work should be honored, whether you ascribe to that faith or not.  I am sure that they will never be able to duplicate all of the work and joinery that was lost in the original, but hopefully, they will try, even if some of the knowledge of how such things were done has been lost over the last 800 plus years.

There is some, well really there’s a butt ton of speculation on the internet, some from the tinfoil hat brigades, and some from normally reasonable people that this was arson.  It may have been. I find it slightly unlikely, as no one has come forward and claimed it, which is a hallmark of political arson, hell call it what it is, terrorism. Still, I’m not going to completely discount the possibility, I wait for evidence, I counsel you to do the same.

Let’s look here: Muslim? The fire broke out after public hours.  The hallmark of Muslim terror is to maximize the body count and thus the horror.  And no one has come forth and said: “that was us, Infidel!” So, I doubt it. An anti-Catholic group attacking the church over the scandals that have plagued it?  Maybe. There have been other Catholic churches burned in recent days, so I’ll not discount it. The yellow Vests? I don’t think they’re that STUPID. They have attacked monuments before, but always government secular monuments, like the Arch De Triumph.  I can’t imagine them having truck with this sort of idiocy, it would KILL their movement.

Considering that the work being done, is probably held to a minimum while services and visitors are present, I find it most likely that the contractors doing repair work on the structure fucked up royal.  I may be wrong, but that seems the way to bet. I’ve seen people that have said that the president of France would lie and keep it an accident even if it wasn’t…

No, you’re not going to be able to keep it a secret if it was arson.  There are too many people involved in investigating it. If you think I’m wrong, summon the ghost of Tricky Dick Nixon, and ask him how easy it is to keep a secret when it’s that juicy and that big.  (Marcon is not exactly popular in France, and there are enough people honing knives for him, that someone would rat him out, just for the fun of watching his government fall.)

Rest assured, if it was arson, they’ll find it, and it will get out, and then if it is and does, it will be a very bad time to be anywhere near the group responsible.  Europe is very good at going from 0 to Jackboot in less than five Oh-No-seconds, and such an act is exactly the sort of catalyst that would generate the change. The fire isn’t even cold yet, let the investigators work.

On brighter and nerdier news, if you haven’t seen, they have been successful in 3D PRINTING A FREAKING HEART!!! The one they printed was too small to be implanted in anything except an infant, but they made a heart and it worked, using a patient’s cells converted to the task.

If you don’t think that’s huge, you don’t understand the issue. We’ve had transplants down pat for about forty years, but the problem has always been tissue matching and rejection issues.  This has been the subject of Science Fiction fodder for decades. Speculation on growing clones, to harvest for organs, and considerations of “is it murder to kill your clone to get the organs…” plus other such ethical questions… Well, who needs to grow a clone, when you can print a new organ to replace whatever is wearing out?!  Your hip is FUBAR? Here let us print you a new one. Kidneys failing? Fear not, come on in and Kinkos will have you drinking again in no time! (yes, I know it wouldn’t be Kinkos, but hey allow me to have a little fun with this!) Repairing the damage done by a car accident, or by an enemy bullet suddenly becomes an entirely different game.  Of course, it makes being an S/F author harder, shit before you can publish your story it’s no longer fiction.

Hey, be careful out there until next time, they aren’t printing pieces at the corner hospital yet.