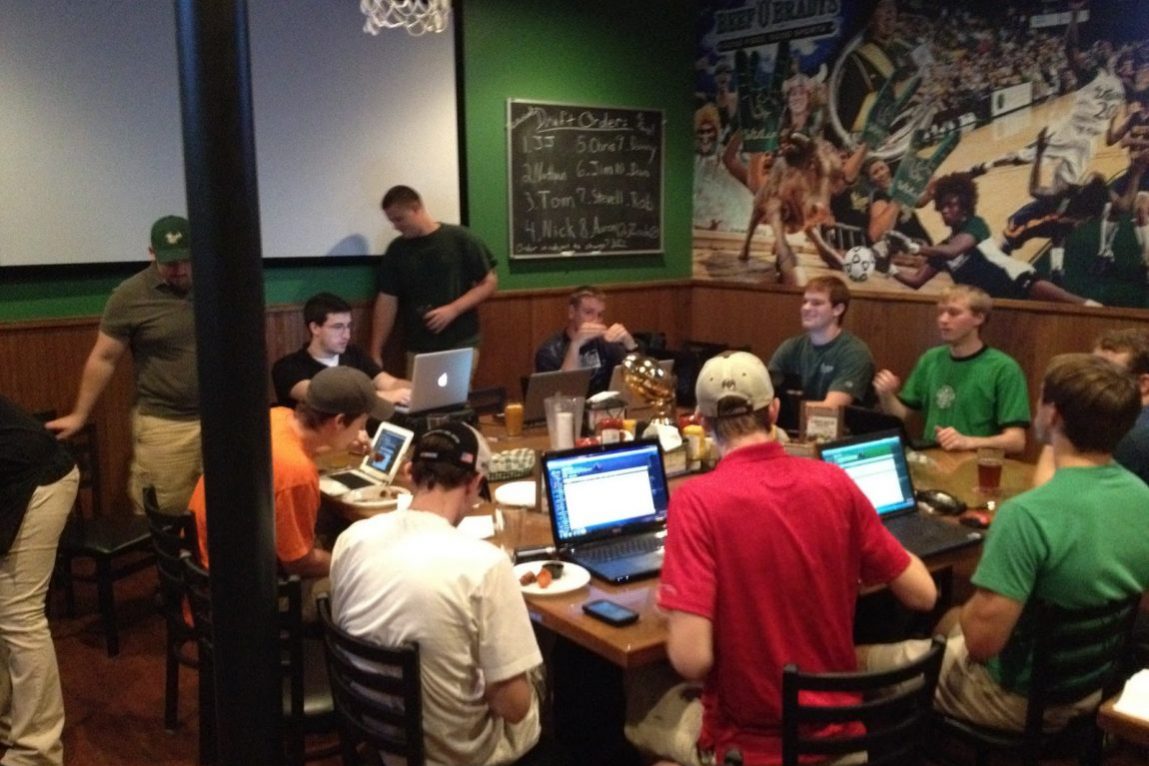 Whether you are hosting a fantasy live draft or participating in one, here is some advice on how to make your draft day as fun and successful as possible. The main focal points will be location, entertainment, traditions, and draft strategy.

Draft location and layout​– Try to hold the draft in a central location of all the members. Send the address out in plenty time if you are hosting and find a way to carpool with another member if you are traveling. The draft should be held at a location that can comfortably seat 10-14 people. In a standard 12 team league, not everybody will usually show but guests may be invited. Have plenty of foldout chairs ready once the couches fill up. TV trays are a good idea for putting draft resources on. Have an open area between seating and the draft board.

Draft board, food, and music​– Spend some money on a draft board that comes with player labels. Writing your team down in your own notebook isn’t fun and others cannot see or comment on your team. Have some food and drinks ready when members show up so your league can talk smack and eat while waiting on others to arrive. Eat before the draft so there isn’t a break in selections and the draft moves smoothly. Music, sound effects, and player sound bites fill in the silence of a room where everybody is nose deep in a computer or magazine. During a draft, televisions can be distracting and slow the draft down.

Establish some league traditions​– Send a group text out weeks or months ahead of the draft and find a common date when the majority of members can attend. Have a punishment for the last place team or an awards ceremony for the champion. Have a time for food and draft order selection to start, then an actual draft start time. Find a fun way to establish the draft order either weeks before the draft or on draft day. Create media guides compiling years of standings. Allow trading of draft picks before and during the draft. Some leagues will want to use a timer for draft picks and others will enjoy the day so much that time is not a major deal. When there is not a timer, players usually make their selection in a timely manner which is roughly one minute or less. If a member drags on, some Jeopardy music usually speeds them up. Make sure the team that misses the draft and leaves no direction ends up with highly questionable players that the attending members can get a good laugh out of.

Draft Preparation and Strategy​– The most important thing to do on draft day is actually show up and come prepared. I have never been a part of a live draft where somebody who was absent won the league. Make sure to understand all league settings and roster spots. Have a player rankings system or two that you trust and agree with. Have a way to mark players off your list whether on paper or electronically. Bring a smart device to look up stats and news when deciding between players. Do not be scared to trade on draft day. If pro sport teams are constantly trading spots on draft day, it is probably a smart idea in certain situations. If you are in a spot where you like a group of players and can’t decide on one, trade back to select one later and gain an advantage in later rounds. On the flip side, if there is a guy you just have to have and he is a few picks away, trade up to get him.

Post Draft​– Immediately reflect on your team and any weaknesses. Begin trade talk that night. Trading can be a long back and forth process so the earlier you let somebody know you want one of their players, the better. If you miss the draft for some reason, hit the free agents. There will be multiple players not drafted that are better than players who were drafted for you. If you did attend and made some uneducated selections in the later rounds, get home and look for some free agents that may be a better fit for what your team needs. While all of these tips are simple, it can be challenging to put all of the aspects of a live draft together. If your league is currently drafting online, you are truly missing out. Many members of live leagues enjoy the draft more than the actual season. When the season is over only one team will be a winner, but on draft day everybody can be a champion in their own mind.