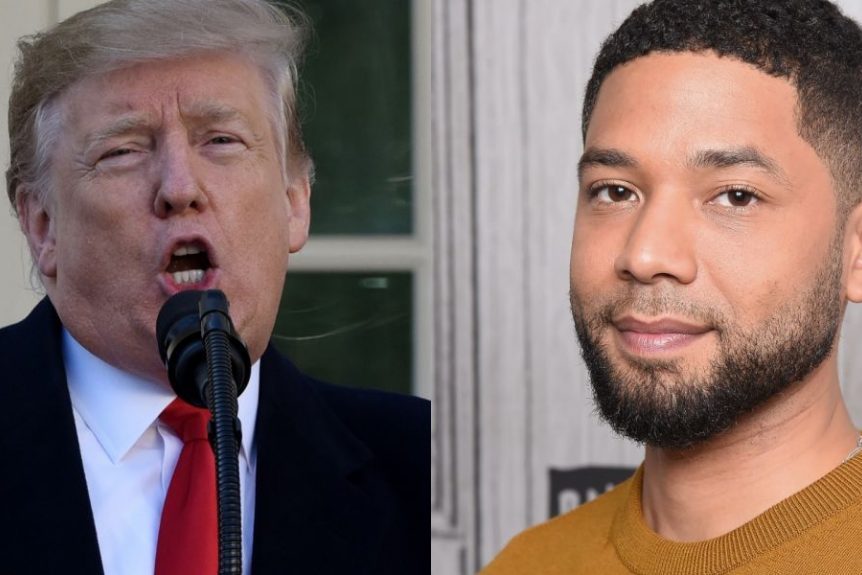 So, let’s start with the idiot above, one Jussie Smollett.  Seems it was a big thing in the aftermath of Mr. Smollett’s “attack” that he was attacked, that it was a hate crime, (I guess he’s gay? Honestly, I never heard of the idiot until this thing happened) and that it was an example of the hate and violence of Trump supporters.  As a result, apparently, all of the usual suspects flocked to his aid and support… Nancy Pelosi, Reverend Wright, Kamala Harris, Cory Booker, etc et al, all jumped on the bandwagon and used this as a stick to beat Trump and Trump’s supporters. Find an article on it here: https://www.nytimes.com/2019/01/29/arts/television/empire-jussie-smollett-attacked.html

All well and good, they were making political hay out of what looked like a couple of idiots behavior, well, fair enough, I make hay out of the opposition’s idiots too… (of course the idiots I make fun of usually got elected, but hey…)

Ah, but it seems that this whole thing was a staged event by this loser. Seems he was going to lose his job on “Empire”, and as a guess this was a publicity and sympathy stunt to Save his job.  The original story was that two white guys wearing MAGA hats beat him up, poured bleach on him and put a noose around his neck…

But then the truth came out.  Dumb-fuck hired a pair of Nigerian brothers to stage the whole thing.  Maybe he doesn’t know that’s a crime? People, that short of shit starts riots and race wars.  Mr. Smollett should do time, and everyone that banged the “hate whitey, hate Trump drum” needs to be issuing apologies at least as prevalent as their original statements, that or needs to be pilloried publicly.

Next, we have a collision on the east coast, the Navy with eggs on our face again, but this is a little different.  USS Leyte Gulf bumped The Robert E Peary while doing an UNREP. That’s short for underway replenishment operation. Imagine two cars going down the road at 35 miles an hour, with a rope strung between them and you’re passing boxes of stuff on that rope… oh and you also have a fuel hose going from one to the other on that rope and are putting gas in the tank.  That’s an UNREP.

These things are DANGEROUS, so Dangerous that no other navy in the world does them except for England, Canada, and Australia. So frankly I’m not having a big problem with this one… Yeah, it’s an embarrassment, but no one got hurt, and looks like no damage… So, I can live with this one.

Now I’m giving you that link, just in case you want to see for yourself the stupidity, but please, allow me to save you from burning one of your three free articles a month (because in no way would I EVER advocate you give that rag any of your hard earned money)  What we have is an article bemoaning how that nasty evil Trump managed to jump on the side of getting rid of Maduro (dictator of Venezuela) before the Democrats could, thus MAKING them side with keeping his ass in power, which is a politically bad idea in Florida. (cue hand wringing about losing Florida because the Venezuela vote might be enough to give him the state, and oh my how horrible that would be)

Note that it’s not at issue whether or not they should take a position opposite the president, “OF COURSE THEY SHOULD” but rather mourning that he got there first, so they are stuck defending the undefendable.

You know, there once was a time when “politics stops at the water’s edge”.  When no matter what the political issues of domestic policy, on foreign policy, the litmus test was “what’s good for the UNITED STATES, and after that, what’s good for the people of the world?  That day is gone, more’s the pity.

Down near the bottom of the article, they (the authors) have the audacity to charge Trump with exactly what they’re doing, by noting that VP Pence gave a speech on Venezuela policy and NOT INVITING any Democratic members of Congress. How dare he not invite people who have said that they would happily shoot him in the head? Oh and Trump “mentioned Venezuela in his SOTU address, then pivoted to a campaign line that seemed to liken Venezuela’s socialist government to liberals in the United States.  How dare he state what several leading figures in the Democratic party have said?  Shit, at least four of the Democrats who have thrown their hats in the ring for the 2020 election have openly avowed to be socialists, but let Trump say “hey, look, they’re socialists”, and somehow, he’s evil incarnate.

If I can get there this weekend, and no one does anything stupid that I’ll have to comment on, I’ll have some non-political fare next week, want to go see Alita: Battle Angel this weekend.  In the meantime, keep air in the banks and … (if you’re a submariner you know the rest) until next time, I remain: