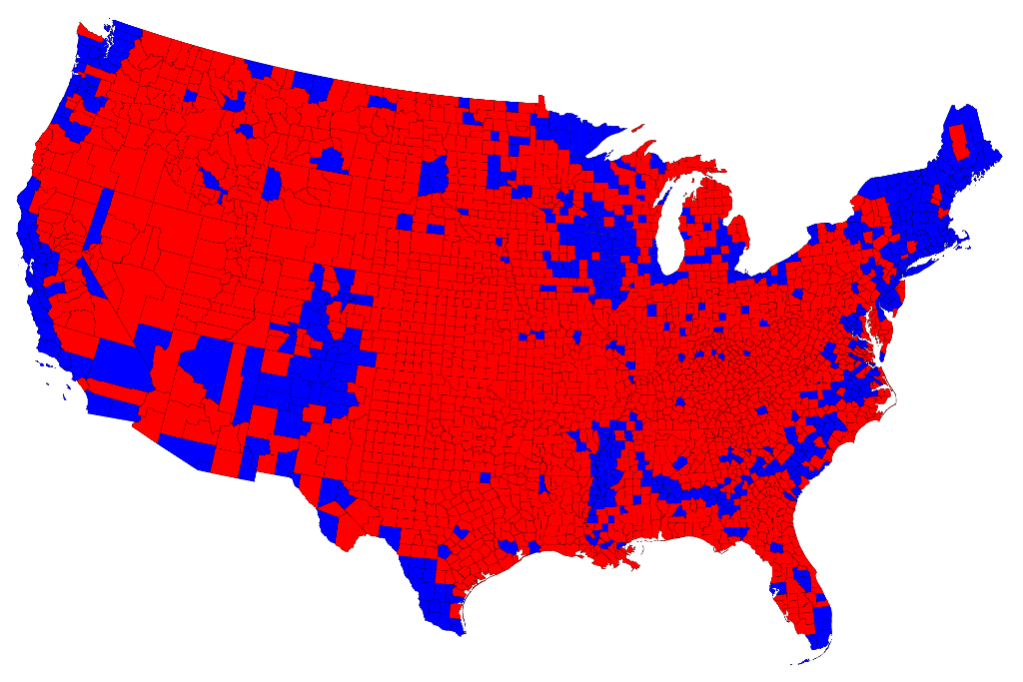 Last year, I completed a round trip run from western Washington to Pennsylvania in an RV.  Most of this drive was along I-90, and I-80, through what the coasts derogatorily dismiss as “flyover country”.  This gave me some opportunity for observation and reflection, during the drive, and this is the result.

I’m a Marine electrician lead (as well as an author) who comes from blue collar roots, and my dad was a member of the Teamsters union for most of my life, until his death.  Some people have called me a traitor to my people for being anti-union.  This trip helped remind me why I am.

It’s a not terribly well known fact that the Pacific North West, makes a LOT of money off exporting hay.  Yes, hay.  First quality green hay gets shipped by the bulk carrier loads from ports in WA, to Japan, South Korea, and the Middle East for the Horsey folks in those areas, and they pay TOP dollar. Farmers make a decent living off this trade.  So I was surprised to see literally thousands of bales of hay (and we’re not talking the little 50lb bales that we used to buck growing up, no… these were the 800 lb. round bales that you need a machine to load, usually the size used for export, and large farm operations) rotting in the fields, all looking about a year old.  Then I put it together.

I have good friends who are truckers.  The Longshoreman strike and slowdowns on the west coast last fall hurt them big time.  All of the truckers I know that work the docks own (with the bank) their own rigs.  By the way, those suckers ain’t cheap.  They cost about as much as a house.  So my friends basically have two mortgages to maintain, one for their house, and the other for their truck.  If they’re not hauling loads, they’re hemorrhaging money like it’s going out of style.  (or like they’re congressmen) guys lost their trucks over this.

There was a big thing in the local papers because a couple of the farm co-ops dumped hundreds of thousands of pounds of apples that were destined for overseas for the same reason.  They couldn’t ship them overseas, and if they put them on the US market the price would drop so low that they wouldn’t even break even after shipping costs.

What’s that? You in the back with the occupy something T-shirt?

“How dare they throw away food, while people are going hungry” you ask?

Well sparky, it’s like this.  The farmers are going hungry too. They get a pay day once or twice a year, and that’s from selling their crop.  They have to make the payments on all their REALLY EXPENSIVE equipment, pay their employees, including the guys that are demanding $15 an hour as the new minimum wage, out of that one or two paychecks a year, and pay their mortgage, and put enough back to feed the family for the year.  So they (like any prudent business man) insure their crops.  If they don’t sell, or are destroyed, the insurance pays off. (not anything like full value, but enough that maybe they don’t lose the farm this year)  If they sell at a loss, the insurance doesn’t pay.  And if they give the food away, not only does the insurance not pay, but who’s going to pay the truckers to take it from where the food is, to where the mouths are? (Yes, I have a point, and I’m getting there, I just need to give you the background).

Well, the thirty or so shiploads of hay that I saw all date from about the same time frame.  So here’s another layer of people hurt I theorize (if there’s any WA, ID, MT, or NB hay farmers that read this and can tell me of a different reason that millions of dollars of hay was allowed to mold, I’m all ears) all because of a strike that didn’t, in the end, really get the rank and file union member much of anything.  (It got the union more power though, and that’s what’s important… to the union).

My dad was a teamster during the great Teamster strike of the early 70s.  His team got along great with management, were happy with their pay and working conditions, and didn’t want to strike.  But some big guys came down from Detroit in a couple Caddies, looked around and said “Dwayne, The union is all going on strike, youse gotta go on strike too.”

“But we don’t have anything we want to strike FOR.”

“Do it for youse families.”

“What do you mean by that?”

“How would youse feed your families if this place was to burn to the ground?  If you was to be kicked out of da union, and your little boy was to get hurt bad, how would you pay medical expenses? Oh and youse guys gotta actually walk the picket line or youse don’t get your strike pay”

Then the goons in the caddies drove back to Detroit, and dad and the rest walked the picket lines.  People who wildcatted that strike were hurt or killed… I remember one guy was hauling dynamite for the coal mines in KY.  The sniper that shot his truck hit the load… It cratered the road.

Dad died in harness over 20 years ago.  Mom got the princely sum of 28 bucks a month as survivor benefits until she remarried.  Tell me why I should support the union?

Another observation is that pretty much all of my leftist friends (yes I have friends from the far left, I view them as slightly retarded, but love them anyway) have been freaking out over the eminent demise of the European Honey Bee, and thus over the inevitable death of all life on earth… Now that ignores that fact that it’s the “European Honey Bee” and not native to the Americas.  Somehow life in the Americas managed to continue to exist before European immigrants brought the Honey bee to the continents.  Still, if you talk to the left, Honey bees are doomed, and with them, the entire biosphere, all due to Monsanto, or Nicoloid gene splicing, or whatever the current evil is, that is causing CCD (colony collapse disorder)… If you do a casual search of the Web for bee population data you’ll find nothing but doom.  But on the drive, I counted about 100 hives an hour while going though agricultural areas, most in groups of 6-10 hives, all with multiple supers under the hive.  Well, unless ALL the bees in North America are on the I-80, US 28, and I-90 corridor, (which I doubt) the gloom and doom just doesn’t seem to match reality.

SO I dug a little deeper… Yup, if you look at the propaganda on Bee populations, it’s all bad, but if you look at the HONEY HARVEST, it’s been increasing for several years (since 2004) and in those numbers (but surprisingly enough NOT in the numbers on bee population, even though they’re from the same office) there are more hives in cultivation this year than last, and that holds true since 2004! http://usda.mannlib.cornell.edu/MannUsda/viewDocumentInfo.do?documentID=1191  HUMM.

Finally, I’m viewed by those aforementioned liberals as a rabid frothing at the mouth conservative. Well, I’m starting to feel like Martin L. King Jr. on that.  Because I hate to break it to the folks from both coasts, and the really big cities in between, (Denver, Austin, I’m looking at you here) but you folks really want to talk to me, because you DON’T want to talk to Malcolm X.

I went hunting in MT a couple years ago.  Talking with my Guide and some of the other locals, I felt like I was the liberal in the room, and practically in the barking Moonbat category.  (These folks were ready to start the revolution tomorrow)  Now I filed that under the category of “These guys live out in the back of beyond, they’re outliers statistically”. On the drive to and from the East Coast, I paid attention to the billboards and bumper-stickers. Folks, the people in “Fly over” country are PISSED, from the guy that guides hunters, to the mayors of towns and cities, to state senators congressmen and Governors who are voting to arrest and imprison federal law enforcement officials for enforcing federal gun laws that don’t agree with state law.

You guys (the left) really want to stop pushing quite so hard.  The political pendulum has never, in the history of humanity, stayed on one side of a swing.  The backlash from overreach has always been proportionate to how far off center it went before coming back.  (Hint, that’s what started the whole prohibition thing, and it’s also what started the 60s, was backlashes)  Well right now we’re staring at a whole hell of a lot of the country (about 80-90% of the land mass, as well as about 50% of the population) that is FED UP.  You really don’t want those guys to decide that the only way to fix it is to burn it down and start over… REALLY! Most of these folks are vets, and the children of vets, they’ve had guns in their hands since middle school or before, or they’re still serving either in the regulars, the reserves, or the NG. If it goes to armed insurrection, even if the left wins, (highly damn unlikely) it will be a mess worse than reconstruction, worse than the Balkans. For the love of the country that I’ve served for over three decades, start seeking peace now.

Well all of this was written before the election. Surprise surprise surprise, as Gomer Pyle would have said, the folks in flyover country got pissed and voted in Trump as an alternative to more of the same from either party.  Immediately the Left started waving guns and torches.  I’m telling you folks, you may have a bare majority, numbers wise (and I wouldn’t bet on that, if it comes to open war) but the Gaulish tribes had numbers too, and Julius ate them for breakfast.  (see also vikings Vs English, Germans Vs French in WWII, Japan Vs China until the US got in the game, etc…) Numbers matter, but unless you have overwhelming superiority in numbers, Skill matters more.

I remain, yours in service William Lehman