Things That Go Bump in the Night (and Early Morning) 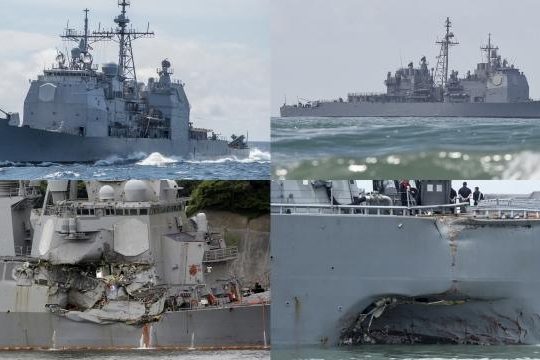 Welcome back to the scuttlebutt. Pull up a bucket, we’re talking Navy stuff.

I had every intention of doing a lighter, maybe a nerdier post this week, to take a break from the politics and “doom and gloom” that my last couple posts have had.

There’s an old saying, “men plan, and Loki laughs.” Well, can’t say if it was Loki, or that rotten Chinese bastard that cursed me to live in “interesting times”, but Seventh fleet blew my plan to do something light and nerdy right the fuck out of the water.   This is, after all the Scuttlebutt, and I would be remiss if I didn’t sound off on the issue and question on every sailor, former sailor, and armchair navy expert in the world’s mind right now.

“What the fuck is going on with our Navy?” You ask. (no really, I’ve been asked just that on multiple forums.)

At this point, I don’t know.

Here’s what we do know:

The rest of the published investigation covers mainly the damage control efforts.  Berthing 2 is estimated to have flooded completely in 30 to 60 seconds.  Those of you that have never gone down to the sea in ships, think on this for a second.  You’re hard asleep in your rack.  You now have one (1) minute or less to get awake enough to get out of bed, get to the one exit that doesn’t have water pouring through it at hundreds of gallons a minute (think fire hose) wading through ice cold water neck deep as you go, and climb the ladder to safety. One of those sailors then went and manned after steering (normal steering was knocked out by the collision, so he was running the rudder locally based on sound powered phone communications with the bridge.)  He manned that post for 15 hours.   Dwell on that shit for a moment. The fact that only 7 guys didn’t make it out of that space was a minor miracle. The fact that those that did, continued to fight to keep their ship alive, successfully, is a tribute to the training and will of that crew, and is in the finest traditions of the naval service.  The commanding officer was literally hanging from the wreckage of his stateroom, over the ocean by his hands for 15 minutes before rescue could break down the door and get him to safety.

The crew did a fantastic job of saving the ship.  But why did they have to?  That investigation is ongoing.  There’s rumors that the Fitz turned into the merchie, I find that almost impossible to believe, but there it is.  Why didn’t the Fitz see the merchie, or did they, and someone had dyslexia? (believe it or not, it happens, in a panic someone goes left instead of right…) or did the Merchant ram them? None of that is available yet, and may not become available, there’s indications that this will be kept close.  Why was the CO in his rack? Well it was late at night, but every ship I ever served on or heard of has the same clause in the “CO’s night orders” “you can never go wrong by waking me up.  If you have a question, even if you want to know what time it is, wake me!”  The reason for that is simple.  The CO is responsible.  If the ship gets in trouble, the CO is the first one to hang no matter what.  It’s bad enough to hang because you screwed the proverbial pooch, but to hang because a subordinate was too (afraid, cocky, negligent…) to wake you?  Oh, that sucks.

There’s a lot of questions flying right now, and not a lot of data.  The reports all seem to agree that McCain was being overtaken from astern (which would make her the privileged vessel, and the collision the merchies fault, unless McCain zigged) There’s report that just before the collision McCain suffered a loss of steering casualty, and may or may not have regained it before the collision.  That raises more questions: Did she turn in front of the tanker due to loss of steering? Did she go to Red over Red mast headlight (red over red, captain is dead.  Means “I am out of control and or unable to maneuver”) Well coming up alongside a foreign warship and suddenly she changes to “vessel out of control” might cause a merchant to freak, and maneuver, maybe guessing wrong and hitting…  There’s reports that the Merchant maneuvered hard into the side of the McCain.

I’m pulling a photoint gig here, but it looks to me like the hole in the McCain is from a ship hitting fairly narrow on, (about a 30-degree angle or so). Which would fit with either the McCain turning toward the merchant, or the merchant turning and ramming the McCain.

One thing we do know from the ADIS track (ship traffic control) McCain was in a TIGHT spot, in the straits of Malacca (think I-5, or I-95 depending upon where you’re more familiar with, at the intersection of any of the Interstates ending in 0 so I-10, I 20 etc.) This is the busiest waterway in the world.  If you wanted to cause a collision, this would be the place.  If you had a few ships on short distance runs, on the lookout for American warships, this would be the place to put them.  McCain was literally hemmed in, with ships on all sides.  They couldn’t maneuver out of the way of one, without maneuvering into another.

Here’s another thing we know.  The Navy has spent the last eight years, doing more with less, in fact doing everything with nothing.  Under Reagan, we determined that we needed 15 CVNs and assoc. battle groups to cover the places that need covering.  Under Clinton that was relaxed to 13, under Obama it fell to 12, then 11, now we’re at 10 and one in “reserve” that in theory could be put back in commission. (Theory is a weak reed, I beg to differ with the politicians on whether we could get the Kitty Hawk back in commission in four years, much less 9 months.) Along with the drop in CVNs came a corresponding drop in escorts.

There has been an infinite amount of money available for SAPR training, Sensitivity training, Special rainbow feel good seminars, modifying submarines to take women crew, trying to get women through the SEAL program, and through the Marine Infantry program (both abysmal failures, to date) but the crews are short (and here’s the thing, a woman can’t deploy pregnant, the number of women crew that wind up Preggers within days or weeks of a major deployment are staggering.  Usually that means the ship goes to sea shorthanded.)  Now I make no judgements on whether women in ships and submarines are good ideas or not, I just point out that statistically, they get “undeployable” more often than men, and usually at the last minute.

In addition, the fleet has been hemorrhaging sailors who are burnt out, or tired of getting shit on by D.C.  Their morale sucks.  I joined the navy in 1980, when the fleet was in just this sort of morass.  Carter had gutted the fleet, and everyone knew it, and hated it.  We had RACE RIOTS for the love of Gods, on Carriers.  So, I know what the boys and girls feel like.  Is this a factor? Probably.

The CNO noted that most of these aww shits have been under one fleet, seventh fleet. As I write this the admiral of seventh fleet is packing his bags.  He’s been fired.  Anyone who is surprised by this doesn’t know the Navy.  You have these many screw-ups on your watch, the consensus is, you’re doing something wrong. Catastrophically wrong.

Seventh fleet is in a really bad position, we’ve got Korea being stupid, and China doing a land grab by making low tide reefs into naval and air force base islands.  As a result, the “ops tempo” (means how often you’re at sea staring at people you might have to shoot) is abnormally high. Add that to the morale issues and manning issues, and you have a shit sandwich.

Then there’s the question of is any of this enemy action?  The ships that have been taken out, are some of the ships that would be shooting down little Kim’s missiles.  Coincidence? Maybe, maybe not.  We know that GPS has been gimmicked before, the Russians did it a while back in the black sea.  The merchants could have people on board who are sympathetic to Kim’s cause, or the Muslim cause (the highest population of Muslims in the world is in Indonesia), or China’s cause.  Or if we want a remotely possible but James Bond style scenario, the autopilots could be hacked remotely on the merchants, and steered into our ships from somewhere else (note that I doubt this one highly, but one does intel assessments based on possible, not probable).

Or we could just have a bunch of tired, burned out sailors, operating with their heads up their proverbial asses, due to too bad an attitude, not enough training (see the Navigator on CG 54), over worked, tired, and pissed off.

Either way, The Navy owes it to the sailors and to us, to find out what happened, tell us what happened, and make damn sure that it stops happening.  (they’ve given indications that they may not share the results of the inquiry with the public.  In the eyes of this old sailor, that would be a huge mistake.  Makes you look like you’re covering shit up, sir. Don’t do it.) Yes, building more ships and recruiting then training and retaining more sailors is expensive.  Not as expensive as losing a war because the ships you do have are nonfunctional, in a drydock somewhere getting fixed.  Not as expensive as having a nuke from some crazy little shithead hit us or our allies because our ships weren’t there, or weren’t up to the task, due to over work and being spread too thin.

As any good planner knows, two is one, and one is none.  Shit’s going to break.  If you have a backup, you can get by, if not, you better hope that’s not the thing you need.  Doing this sort of math when nuclear war is on the line is suboptimal.

Well that covers another week. You all keep your eyes on the horizon, and if you see something that doesn’t look right sound off right then, rather than wait to see what happens.  That gets people killed.

I’m yours in service