The Truth of Our Nature 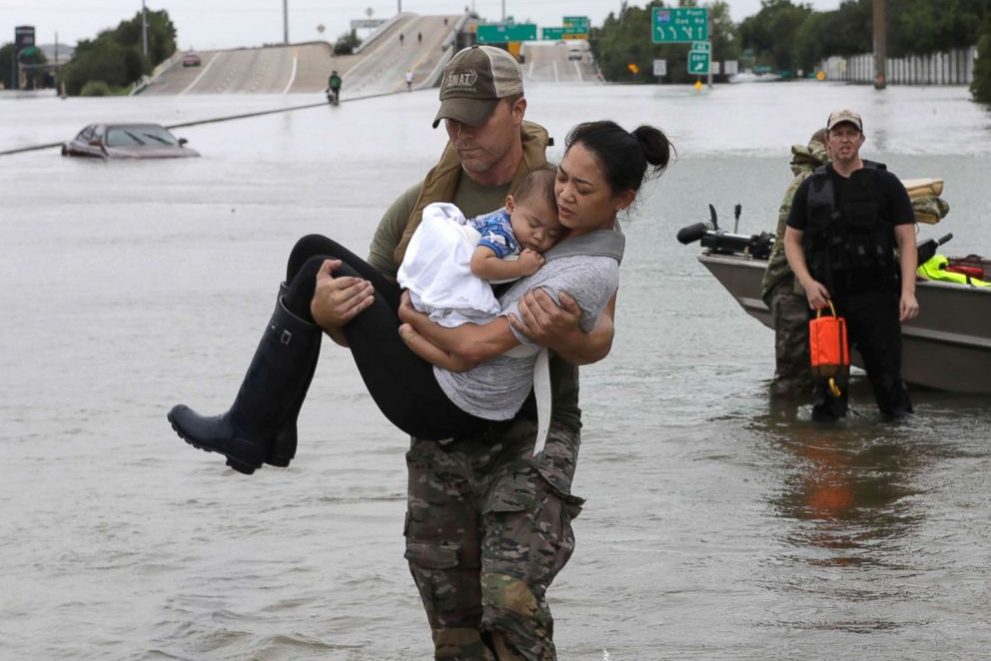 Welcome back to the Scuttlebutt, pull up a piece of deck and grab a cup of Joe.  We’re gonna have a little chat.

Well, of course they can’t both be right, and they aren’t.  Truth is neither one is right.  Let’s look at the facts on the ground:

People are coming in from all over the country, some of them “self-deploying” which is a fancy Disaster Relief Manager’s way of saying “these ol’ boys just grabbed their gear and came on down to see what they could do, without any agency, or NGO or any other type of support group helping them out.”

In addition to the guys that do this for a living, (the Red Cross, the Salvation Army, various Search and Rescue outfits, fire departments, the USCG, etc) you’ve got the “Louisiana Navy”, the “Louisiana Army”, the Texas versions of the same, and a bunch of good ol’ boys from all over just showing up, because people need help, and they can help, so they do.

We’ve all seen the pictures of guys and gals running around in everything from Billy-Joe’s bass boat, to Airboats, canoes, anything that will float really, or just in waders.  They’re pulling people out of submerged houses, off roofs, rescuing dogs and cats, herds of cattle, you name it.  Those Swamp buggies and Airboats, most of them have Confederate battle flags on them, or the Gadsden flag, but they don’t give a shit what color you are, or if you’re an illegal alien or not, “you need rescuing, and hell they weren’t doing anything else anyway”.  Now lest you think I’m implying that all those folks are white, hell NO, neither of those flags is the exclusive purview of white southerners, despite what anyone would have you believe, and you’ll see a good percentage of those Gulf swamp yachts owned and operated by guys that look a whole lot more like Forest Whitaker than John Wayne.  Or they might look more like Antonio Banderas for that matter.

Then there’s the corporate side.  Apple, Amazon, etc. all are donating millions of dollars, Anheuser-Bush shut down beer production and went to making canned water, then shipping it down, all for free (I honestly don’t know what that’s going to cost them in lost revenue, and wages paid for no product, but I’m sure it’s a chunk) Walmart (more about them in a little bit) is sending 2000 Kayaks, again free.  Some Guy that owns a local mattress store opened his doors and said “Ya’ll come in and pick a bed, sack out”.  Yes, he made his store into a refugee camp for the duration.

Yes, that’s a big but. There’s also looting, a group of assholes that are trying to take those Louisiana Navy’s boats away from the owners at gun point, and a whole lot of breaking and entering and burglary.  Let me make myself clear, the sort of rat bastard that would steal from people whose house is flooded, and who have lost most of what they have, gets no pity and no understanding from me.  They get 185 grains of Lead alloy and copper jacketing, at 1200 FPS, repeat as needed.  In the navy, there’s no lower form of life on earth than someone who will steal from a shipmate.  These people no, they don’t rate that, these animals, are best used as crab bait.  In addition, there’s “Charitable Humans” self-described as a “progressive tax-exempt nonprofit organization seeking new and innovative approaches to address issues in our world and advance humanitarian causes.”  Who flat out said Texas deserved it for voting for Trump, and they should all die. There’s Kenneth Storey, a college prof, (now ex college prof) who said Texas “deserved Harvey” for supporting Trump, and many more like them.

Now remember Walmart? The left despises that store, claiming they put mom and pop stores out of business (yes they probably do, but they employ more people than those mom and pop shops), but when push comes to shove, there’s Walmart spending money that they in no way are obliged to, to help folks in need.  Where is, oh say, Ben & Jerry’s, (to pick on a well-known left owned and operated company)?

This isn’t to say that all leftists are bad people, these aren’t most of the left.  In addition, I saw a guy on the hard right ask if we would be as sympathetic to the plight of the victims if this happened to CA. while admitting that if it happened to California, he would be quite happy to let them die.  Dude, if you’re going to say shit like that, please change sides, I don’t need you.

Here’s the truth of it.

Disaster doesn’t bring out the best, it doesn’t show the worst.  It strips us of all the social veneer that we’ve carefully covered our real self with, so that we can meet the approval of society as a whole.  It shows us for what we really are.  I’ve been through flooding at a very deep depth twice, a few fires while submerged, been shot at, and a few other unpleasantness’.  They all reveal you for what you are, coward or hero, fool or sage, selfish or selfless.

As a nation, we are made up of more heroes, sages, and selfless men, than foolish selfish cowards.  It’s the only thing that will save us.

John Wayne once said in a movie “there’s right, and there’s wrong.  You’ve got to do one or the other.  Do one, you’re alive.  Do the other, you may be walking around, but you’re as dead as a beaver hat.”

Our job, is to do right, as we see it.  To ensure that we vote for those people that we believe will do right, and to hold their feet to the fire to make sure that they do it.  Yes, sometimes there’s not a lot of choice between two candidates, but if we’re to save this nation from itself, it’s up to you, each and every one of you, to agitate in the parties for the best man you can find, and to do everything you can within the law to help him or her win.

The question to ask yourself is, would he or she be the one running a boat, or the one looting the house.

I’m tired of these being heavy topics, so let’s hope the universe doesn’t do anything else in the next week, and I can geek out about something fun.

Until then, I remain