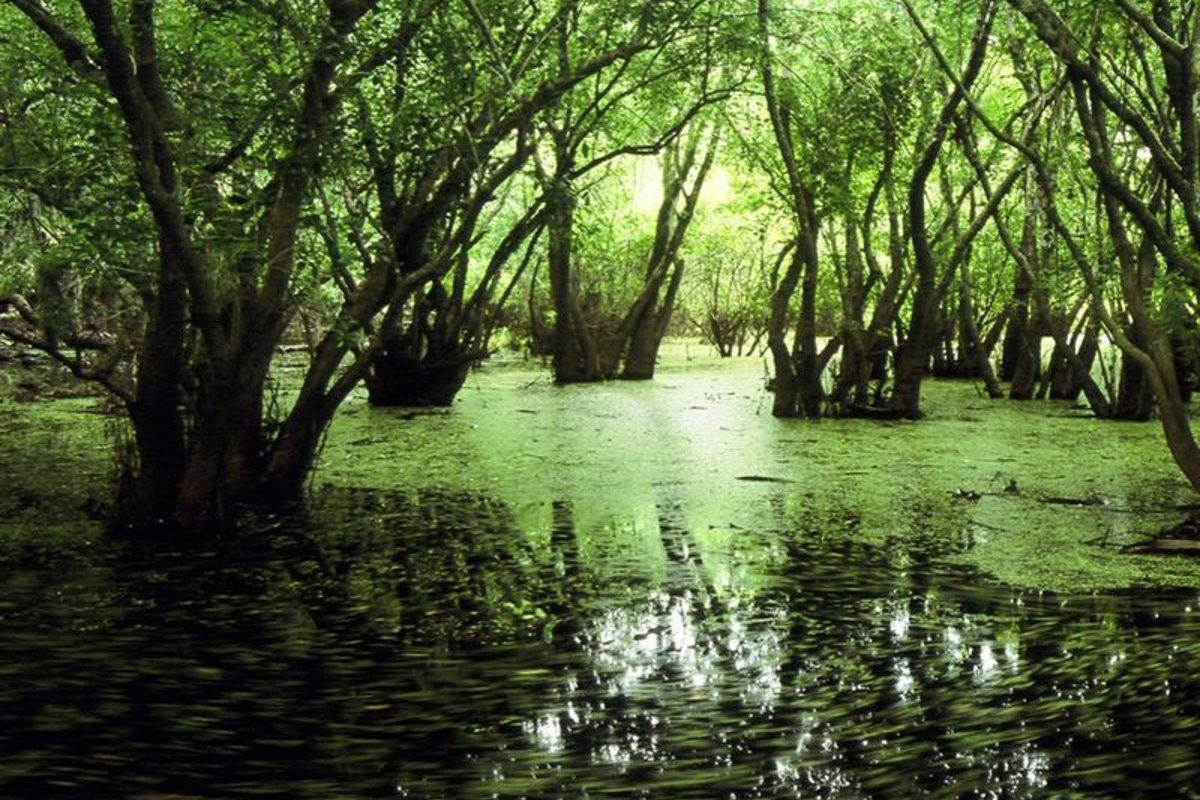 Welcome back to the Scuttlebutt, Coffee is on, have a sit. Let’s talk about swamps.

See, a swamp; that’s stagnant water, rotting vegetation, mud and wasted land that would be fertile as hell if not for the several feet of water on top of it.  It’s a breeding ground for malarial mosquitos, rats, and other vermin.

Ah, but a “wetlands” that’s a flood control area, and a naturally diverse ecosystem that provides a nursery for all sorts of prey animals that anchor our ecosystem, and ensure the diversity of species.

Why, YES they do mean the same thing, how very observant of you.  One man’s blood sucking disease carrying pest, is another’s natural part of the ecosystem and ensures the survival of other species.  I think it’s directly related to how far away you are from the object in question, that determines your perspective.

If you make your living off the land, and/ or live near a swamp, so that your children are at risk of getting malaria, bitten by rats, etcetera, your crops and or the food in your house are under threat from the rats, not to mention the other wonderful diseases carried by rodents and the pests that they have… You see a swamp as a bad thing.

If on the other hand, you live far away from the wetland in question, if you’re someone who sees it from the theoretical side, a biologist who only goes into the swamp to perform studies, or a swamp creature yourself, well then, it’s a wetland.  You don’t have to deal with the bad parts of it, or you are indeed a part of the badness.

President Biden released a little three minute message to the “career staff” of the federal government though the FED Manager newsletter talking about how he really loves us and how his long (and I mean LONG, 40 plus year) career in politics has given him the deepest respect for us… He also, immediately upon being sworn in, rescinded the Executive order creating “Schedule F federal employees” which FED Manager was also quick to crow about.

What’s a “Schedule F” employee you ask? Well, that was an Excepted service employee who held a position of a confidential, policy-determining, policy-making, or policy-advocating character but are not normally subject to change as a result of a Presidential transition.  Under President Trump this schedule was created to control unelected senior management that makes rules having the force of law, and seemingly answerable to no one.

If you’ve been paying attention, it should not be a surprise that there are millions of pages in the Code of Federal Regulations (CFR).  These regulations have the force of law. You can get put in jail, your possessions can be confiscated, you can be made a criminal for violating these regulations.  Yet they were not made by someone you elected, but by someone who was appointed to that position.

It’s also not a secret that once you’re a federal employee past your probationary period, unless you actually commit a crime, sexually harass or assault someone, or lose your clearance, (and sometimes not even in those cases) you’re just about untouchable.  Seriously, you have to REALLY mess up to be fired as a senior manager for the federal government.  The last batch I remember getting walked out the gate had been defrauding the government for years, paying employees for stuff they didn’t do, and getting kickbacks of some of that money.

Now, add to this that we’ve been selecting for political correctness, and hiring based on academic credentials for fifty years, and you can figure out the sort of folks that are sitting in those “schedule F” seats.  And this, my friends, is “THE SWAMP” as in “I’m going to drain the swamp”.

These are the people that have been indicted and convicted of using their office to further the cause of their political patrons in some cases.

Now the Senior Executives Association, and other organizations that represent the interests of senior federal managers are terribly happy about this.  They talk about how our hiring system uses “the Merit System principles” to ensure that we don’t hire based on patronage, etc.

The Merit System is a sound idea, and in theory should ensure that we don’t build a system like the system it replaced: “the Spoils System” where political appointees were given cushy positions for having supported a politician who got elected.  (some states still run this way, I have relatives there, it’s a pretty rotten system.)  Well, it worked for a while, but humans being humans, it’s not anything like perfect.  The people making the hiring and promoting decisions still get to say things like “well, he’s not a good fit, he won’t work within our culture”.  I get this, I’ve used that phrase myself for someone that if we had put him on our team would have been a net negative worker.  Not only would we not have gotten any production out of him, we would have spent a significant amount of time fixing the sand that he put in the gears.

The problem is that the first time you get someone high up (oh say a secretary for…) who has a significant political bias, they hire, perfectly legally, folks that think like they do, who in turn hire underlings that think the same way, and so on.  Ideological purity being one of the trademarks of the left, they are more likely to do this than the right.  And so, we get people who may not know fuck-all about farming in charge of the Department of Agriculture.  Oh, they have a degree in it, they can spout all the latest theories, but the only farm they ever saw was the college farm where they got their degree.  They are sure however that our methods of farming are EVIL because we don’t do it organically, or we drained a wetlands to do it, or we don’t take into account the wants of some guy from china.

I picked on USDA because it was handy, but the truth is the same for all of the various departments, including my own DOD, who has some very senior people that have never seen the inside of a ship except during a fucking two hour tour of a shipyard as part of a photo op, never seen the inside of the wire at a FOB, much less been outside the wire, could not tell you where the fuel goes in the jet when looking at it, but gets to make decisions that affect the lives and survival of the folks on the pointy end.  People to whom it’s more important that we have significant diversity, and x% transexual gay left-handed immigrants who are socially aware and able to design diversity training, than that we have ships that can sink other ships and not get sunk themselves.

Schedule F was set up to make those folks no longer “untouchable”.  It wasn’t perfect, but it was a good start.  It wouldn’t affect anyone except the very senior people who could form “the resistance” which we saw in action during the Trump administration.  A group of such senior people can sabotage the shit out of the programs, wants, needs, and desires of elected officials.  This way leads to the sort of Mandarinocracy, that China had and for a large point Great Britain has.  That’s not the sort of government our forefathers had in mind.

It’s not in the best interests of the country however.