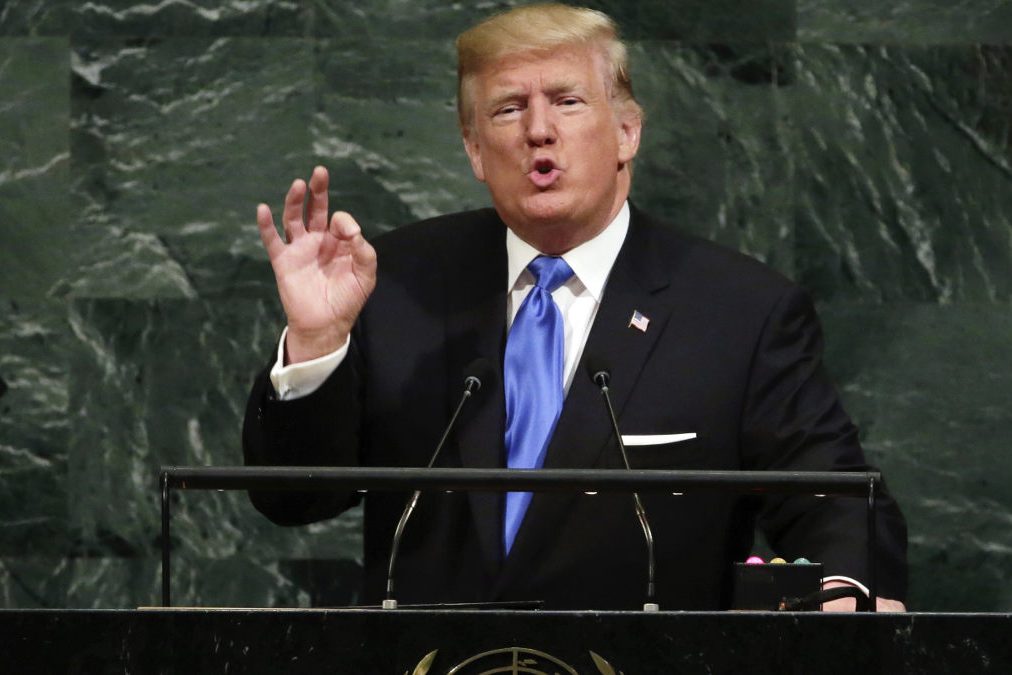 There’s a lot to talk about here.  President Trump made this a defining speech on his concept of foreign policy.  I just want to hit a couple of the high points, and by high points, I mean a couple of the points that caused the Control Left to clutch their pearls, and grab the smelling salts (or more likely the Peruvian marching powder, the cocaine).

“The problem in Venezuela is not that socialism has been poorly implemented, but that socialism has been faithfully implemented.”  Beautiful!  That may go down in history as iconic of a phrase as, “Mr. Gorbachev tear down this wall”. Finally, a president that is willing to call a spade a fucking shovel.  He went on record as saying what hasn’t really been said since Reagan, and before that you must go back to JFK I suspect.  Communism, and Communism lite (socialism) are evil.

“From the Soviet Union to Cuba to Venezuela, wherever true socialism or communism has been adopted, it has delivered anguish and devastation and failure. Those who preach the tenets of these discredited ideologies only contribute to the continued suffering of the people who live under these cruel systems.”  Well, of course this flies hard in the face of the internationalist, “we’re sorry, we’re evil, and we’ve ruined the world” bullshit of our last president.  I’m sure it caused some serious vapors.  It wasn’t the only part that did.

He had the audacity to rub Europe’s internationalist nose in the fact that we, the US, not only helped them destroy one of the greatest evils the world has ever known, we then turned around and rebuilt their ass, and instead of doing what every other nation has done when they found themselves with the whip hand, we turned the nations that we saved free.  We did not annex the lands that we liberated from the enemy, except in the few cases where they were ours before the war, and those we gave freedom when they asked. (looking at you P.I.)

“We do not expect diverse countries to share the same cultures, traditions, or even systems of government. But we do expect all nations to uphold these two core sovereign duties: to respect the interests of their own people and the rights of every other sovereign nation. This is the beautiful vision of this institution, and this is foundation for cooperation and success.”  He went on to say: “In foreign affairs, we are renewing this founding principle of sovereignty. Our government’s first duty is to its people, to our citizens — to serve their needs, to ensure their safety, to preserve their rights, and to defend their values.

In short, you make sure that you take care of your people, I’ll make sure I take care of mine, and we’ll see if we can come to some sort of agreement, that hooks us both up.  About God damned time.  I’m well and truly sick of presidents that think they were elected to ensure that the wants and needs of the rest of the world are taken care of.  They have their own leaders to do that.  Our president is supposed to make sure OUR wants and needs are looked out for.

If this is the basis for our future foreign policy, it’s something I can truly get behind.  I wasn’t a fan of President Trump when he was running, he wasn’t my first, second, or third choice.  But if this is his true policy, I’ll vote for him next time.

“The United States has great strength and patience, but if it is forced to defend itself or its allies, we will have no choice but to totally destroy North Korea. Rocket Man is on a suicide mission for himself and for his regime. The United States is ready, willing and able, but hopefully this will not be necessary. That’s what the United Nations is all about; that’s what the United Nations is for. Let’s see how they do.”

Again, to paraphrase: This guy is threatening us and our allies.  We have the capability to make his nation a flat memory. UN it’s your job to fix shit like this, if you don’t we will.

I’ve SEEN the pearl clutching over this one.  “Oh my god, he just threatened to use nukes!” “He’s a mad man!”  “How dare he threaten to nuke someone for threatening to nuke us?”

Well cupcake, that was what kept the Soviet Bear at bay for 70 years.  It’s what kept Europe and probably the rest of the world free.  The knowledge that the only way to beat us was to nuke us, and you couldn’t survive trying that, because even if you got all the land based weapons, our subs would make you a bad memory.  Is it a bluff? No, it’s a promise. If you throw a nuke, you’ll only throw one.  Mad man? Well, from where this old salt sits, polishing his SSBN patrol pin with 16 patrol stars on it, he may be the sanest individual in the room, on dealing with a loon with nukes.  Those rockets are only good if your enemy BELIEVES, knows in their heart of hearts, that you WILL use them.  For the past twenty years, we’ve been paying this little fuck’s family Danegeld.

He knows it, we know it.  It’ll be Saigon ’73 all over again.  If we do that to one of our best allies in the region, hell in the world, who then shall trust us? The time to stand up to this little bastard was twenty years ago.  We didn’t then, the stakes are greater now.  It’s time to be Churchill, no more Chamberlain.