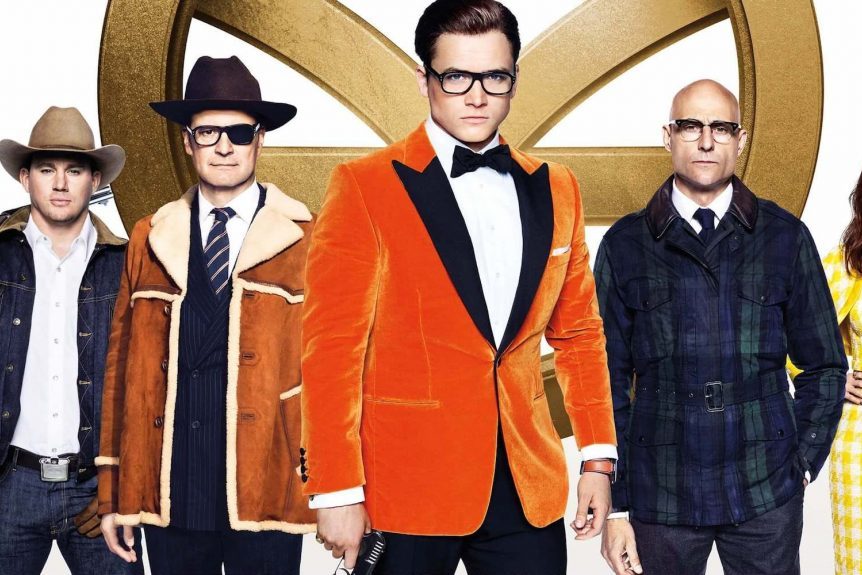 Well, I considered discussing the current situation with the NFL, but I’m pretty sure that if you’ve read any of my work in the past, you probably know where I stand and salute on that subject, and there’s plenty of other folks that have weighed in on it with every bit as much effect as I could.

I could discuss the moron (sorry that’s now Lt. Moron) that decided to get pictures at his graduation from WEST POINT with a Che’ shirt under his uniform and a “communism will win” sign inside his cover, but my Friend David Burkhead, did a fine job of that at this site, so I’ll just let you see his: https://thewriterinblack.com/2017/09/27/politics-in-uniform/

Frankly I’m burnt out a little on the politics, so at least every second or third post I promise to keep off the political soap box.  Instead let’s talk about something fun.  Kingsman, the Golden Circle definitely fits.

Short form? Fun movie.  Yes it’s fluff, yes it’s over the top. But it doesn’t take itself seriously enough to get bent out of shape about the fact that it’s fluff, and over the top.  It’s just a lot of fun, and at the same time develops the characters for further movies in plausible ways (for internal logic of this world values of plausible).

There’s a couple things to keep in mind when dealing with the Kingsman universe, that weren’t specifically mentioned in the first movie.

First: If you didn’t see him or her cut in half, beheaded, or SAW head explode, he may not be dead.  Yes they explain that, and why.

Second: It’s based on a COMIC BOOK, people.

Third: In what seems to be a running theme for these movies, if you find yourself in this world, and the bad guy offers you a hamburger? Yeah, shit’s about to get real, check your piece.

Was this the best film of the year? Oh hell no. Was it in the top ten? Not a chance.  It was however a good romp and a fantastic escape from a world that has gotten so serious and so ridiculous that you couldn’t write it as a novel.  No shit, folks, the difference between real life and a novel? You have to make a novel make sense.  It’s worth the money. Go, catch a movie, get some popcorn, raisinettes, and a soda.  You deserve it, you’ve been putting up with the insanity all week.  This doesn’t have an agenda, doesn’t spin shit, isn’t attacking anyone, the bad guys are unquestionably bad, (and all have decent reasons to be bad) The good guys don’t have an easy time of it, but win in the end.  The perfect recipe for an escapist afternoon or evening.  (oh, don’t bring the kids, unless you’ve already had “the talk” with them.)

That’s all for this week, keep a weather eye out folks, it’s crazy out there.