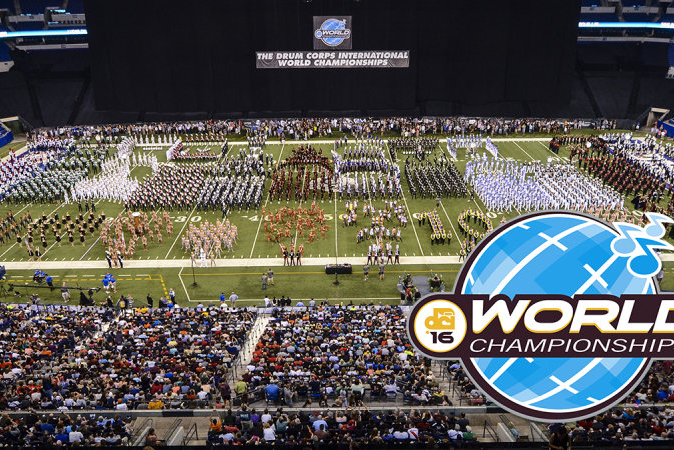 Once spring training is in the books, the real adventure that makes drum corps such an incredible experience can officially begin. Summer tour is where the corps is performing from night to night and doing anywhere from two to five shows in a row. After move-ins, you’ll most likely have the majority of the show on the field. You’ll probably have your base tan, and you’ll most likely have lost some weight by now. You’ll sleep hard on the gym floor in a high school in the middle of state you have no idea you’re in. Tired is no longer a physical feeling, it’s basically a state of being. You’ll have unsightly tan lines, callouses, and a very strong sense of community with the rest of your fellow members.

There are some fundamental differences to tour though. You start performing at actual shows, where crowds go crazy over this activity. The show changes a lot as the season progresses. Sometimes, you’ll make changes to a show chunk that day and it must reflect in the performance that night. You practically live in a charter bus, along with 50 or so other people, and all of their personal effects. You sleep on this charter bus for the majority of the time you’re not rehearsing. You’ll end up in some very strange, uncomfortable, and unfamiliar situations and places. Your emotions become magnified by about 20 times. You get to see your friends and family from the “outside world” that support you enough to come watch you perform. You’ll learn what real work ethic looks like, as you really try and nail down that show passage that just always seems to get the better of you. You’ll see why people call this the hardest thing they’ve ever done, as the day-in and day-out of tour is exhausting.

Essentially, there are three types of days during tour:

A show day- just like another day of spring training except, you have a performance in the evening. A short morning rehearsal, followed by an afternoon ensemble, and then you load up to go to the show site and the housing site that follows.

A rehearsal day- just like another day of spring training.

A free day- a day without rehearsals, shows, or drum corps. A day to act like a normal person again.

Tour is what I remember most from my time marching. You’ll see the most interesting places, meet the strangest local people, and experience some of the hottest temperatures you’ve ever come across (Oklahoma in mid-July is no joke, people). Tour is like spring training in that the days are just as long, but at the end of them, you get to perform for crowds that are there specifically to see these groups perform. Drum corps is the main event. And that’s what makes the entire experience worth it. It makes being in the blistering heat for 8 plus hours worth it. It makes repping the same tricky part of the show enough times that you lose count of how many times you’ve done it worth it. It makes sleeping for 6 hours on a charter bus, waking up at 3 AM to drag all your things into the school you’re staying at, and waking up at 8 to start another day worth it. It makes getting to perform and play music with some of your best friends in the sun worth it. And it all leads up to the World Championships that are held in August in Indianapolis! Check back next week for that story!