Some Days It’s Rough Being a Pundit, Part 2 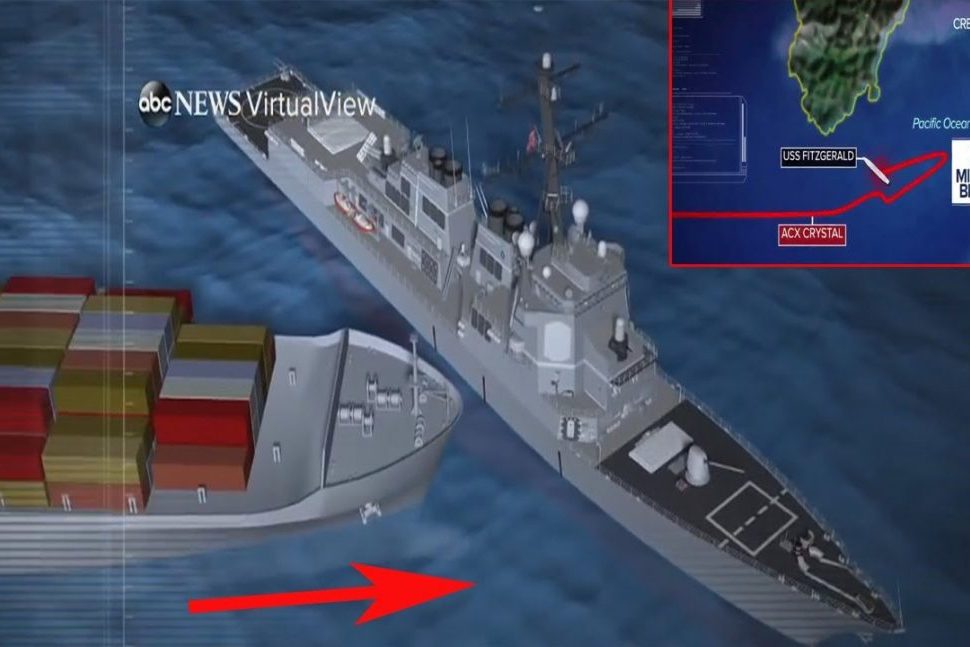 Welcome back to the Scuttlebutt. We’ve had another week of an embarrassment of riches, in the MORON department. Grab a cup of something strong, you’re gonna need it.

I really wanted to cover the court-martial of the officer of the deck on the USS Franklin, and with it the article from Admiral Aucoin (former Seventh Fleet) as published in Proceedings magazine, so I’m going to do that today.  There is however the US embassy in Jerusalem, which I would love to comment on, as well as the ongoing stuff in North Korea, etc. And there’s something else that I just can’t ignore and still call myself a Science Fiction fan.

So, lets touch on the 800 lb. gorilla in the S/F living room, before we go on to the Navy.

When I talk about an 800 lb. gorilla in Science Fiction, there’s only one living guy I could mean. Larry Correia.

Now Larry is a great big guy (hence the gorilla crack) but he’s also one of the nicest guys in S/F today. Author of 29 novels, many of them award winners, and at least one board game, Larry used to be a top-flight CPA, until he did the math and realized he was losing money doing that when he could be writing.

Think about that for a second. High 6 figure a year CPA is losing money by doing that instead of writing.  Yeah, he’s that good. In spite of that, he goes out of his way to help other authors, does the patented “Larry C book bombs” to help deserving authors get a big kick-off, (wish he would do that to one of mine…) goes to cons, and on book tours where he just goes up into the stacks and signs random books of his (yes, I have one of those, from the University Book Store in Seattle.)  He’s also a devout Mormon, which frankly makes the accusations against him ludicrous on their face.

Well Larry got Ringoed. I’ll refer you to the horses mouth: http://monsterhunternation.com/2018/05/15/statement-concerning-my-being-disinvited-as-the-guest-of-honor-for-origins-game-fair in addition there’s lots of other brilliant blog work about this, from http://www.declanfinn.com/2018/05/correia-was-ringoed.html to https://madgeniusclub.com/2018/05/15/it-is-time-to-fight-back/ So I’ll just refer you to those wonderful folks. Frankly there’s nothing more that I can say about this, except what Ringo himself said : So Larry Correia’s invite as GOH to Origins got rescinded because he’s ‘racist’, ‘homophobe’, ‘has sex with manatees’ etc. This is a strong suggestion to any decent author, especially all Baen authors. If invited to a con, especially as a ‘special guest’, require the following in your contract:

Show them links to what happened to myself and Larry.

If they cave to the SJW mobs, make it cost them.

If they refuse, they’re probably setting you up. (This, very much, looked like a set-up to boost visibility. ConCarolinas is slightly different.) Tell them that based upon recent history you have to assume they’re setting you up if they have issues with such basic items and ask them not to contact you again.

Start choking them off of the revenue stream created by our attendance.

As authors, we really don’t need conventions anymore. You get more sales through posts online and engaging in social media (for as long as Twitter and Facebook will allows us to do so) than going to all the conventions in the world. The cons are mostly for your fans and if the cons want to play this game, the fans need to make it clear they’re not going.

The exceptions to this are LibertyCon and Dragon Con. They’re both professionally run cons run by professional people who don’t play the SJW game. They’re TRULY apolitical. ( FenCon Convention seems to still be playing it down the middle as well.)

With every other convention, assume you’re being set-up at this point and don’t be played for a sucker.

Oh, yeah, and as fans and lovers of liberty, never, ever attend Origins again if you ever have. Or ConCarolinas. (Sorry, Jada.) Or ArchCon. Or WorldCon.

This has to stop and it won’t until we take a stand. For those of you reading this who are ‘liberals’, please look at the history of how this is going and wonder how long it will take for YOU to end up against the wall. Think they’re going to stop with me and Larry? Think again.

It’s time to strike back. We don’t need cons. Cons need us. Time for them to figure that out.

OK so, with that said, back to the Navy.  The Officer of The Deck on the Fitz, that deadly night, has pled guilty to “Failure to communicate and coordinate with the Combat Information Center, report ship specified contacts to the commanding officer, operate safely in a high-density traffic condition and alert crew of imminent collision.” In other words, Dereliction of Duty.  She got off light, ½ months pay for three months and a letter of reprimand.

The lack of more severe punishment leads this old salt to think the court figured she was set up for failure.  That combines with what Vice Admiral Aucoin USN (retired) had to say, in sad ways.

Who is V.Adm. Aucoin?  He used to be 7th fleet, until a series of goat screws as big as all outdoors caused him to be fired and retired shortly before he was supposed to hand over the fleet and retire on his own.

There’s a magazine called “Proceedings”.  The full title is “The U. S. Naval Institute Proceedings” it’s the trade rag for Canoe U. (that’s the Naval academy for those of you that were not blessed with a naval education.)  Well, Aucoin wrote an article for this magazine. It’s here: https://www.usni.org/magazines/proceedings/2018-04/its-not-just-forward-deployed Do yourself a favor, go read it.  He names names and gives dates. He calls a spade a fucking shovel.  I’ll give you some of the choice excerpts here, but seriously, go read it.

“I had the privilege of serving with some of the most talented and dedicated sailors and civilians in our Navy, culminating in what I believe is the best job in the world—Commander, U.S. Seventh Fleet (C7F). I had the opportunity to work with our forward-deployed forces in the Western Pacific. Tragically, during the summer of 2017, we experienced the horrific collisions of the USS Fitzgerald (DDG-62) and USS John S. McCain (DDG-56) . I am concerned that, in some quarters, these collisions are viewed and characterized as a “local”—Japan only—problem. There certainly were pressures on the fleet in Japan, but there are also indications of problems elsewhere. While the investigations in the aftermath of the loss of 17 sailors addressed many of the issues that may have led to the collisions, there were other factors. I offer some additional thoughts on what we were dealing with, because without a full understanding of what happened, we will be limited in our ability to address the root causes and ensure this does not happen again. “

“I made clear to Commander, U.S. Pacific Fleet (ComPacFlt), the impact of increased operational demand on training and maintenance well prior to the two DDGs’ collisions. Despite these explicitly stated concerns, the direction we received was to execute the mission.”

“Not only did my staff recognize the negative effects of manning shortfalls on the FDNF, it was thanks to our insistence that U.S. Fleet Forces Command (USFF) finally agreed to an FDNF Manning Summit in June 2017. “

“When it comes to addressing the critical manpower shortages that we faced, however, the CR does not mention the above, nor does it really go after our manning shortfall with actionable items. While it is said that the CR focused primarily on training and readiness, it did not address manpower issues nearly enough.”

“Between 2015 and 2017, naval operations in the Indo-Asia Pacific expanded dramatically both in direct response to national priorities and to ComPacFlt and Commander, U.S. Pacific Command (USPaCom). As a consequence of the increasing demand for and decreasing availability of C7F assets, readiness declined in CruDes forces. This was known both to commanders in FDNF and across the Navy. The GAO had reported to the Navy in 2015 that resources were not keeping pace with demand. Through 2016 and culminating in early 2017, my staff produced detailed data quantifying the increase in CruDes operational tasking and demonstrating the consequent decline in executed maintenance and training, which I sent directly to ComPacFlt. ComPacFlt agreed operational tasking threatened FDNF surface maintenance and training. Yet C7F received no substantive relief from tasking or additional resources.”

“Any chief on the waterfront between 2015 and 2017 would have told you that manning was the number-one issue faced by FDNF-Japan ships. FDNF sailors are motivated individuals. Still, the fastest way to kill that motivation is to meet a returning FDNF sailor at the pier in Yokosuka or Sasebo and tell this sailor that he or she must go right back out on another deployment on a different ship because of a manning shortfall. Meanwhile, it was frustrating to hear that some San Diego ships were overmanned, as I expressed during one PacFlt meeting after hearing a West Coast ship was so over-manned it left 30 people on the pier. At the time, we were having to cross-deck 49 sailors in FDNF-J to fill gaps on our ships, and 5 of 11 CruDes forces had senior quartermaster billets gapped.”

So… let me boil all that down for you in case you don’t speak Navy bureaucratese.

“7th Fleet, send out a ship to cover this thing.”

“Pac fleet, my ships are all broke, and undermanned, they just got in!”

“I don’t care, and I don’t believe you.  We can’t tell congress we’re broke, send out a damn ship.”

“Dirtbag!  How did you let this happen?  I need a scape goat, you’re fired!”

Look, I hope my Navy unfucks itself.  With our current SecDef, we have the best chance in decades of doing so, if the politicians in that five-sided bullshit factory will just quit covering their asses, and tell the truth.  The LCS is the biggest waste of money and men since the fucking Hood (no armor on the decks, no radar, under gunned, but boy she looked pretty, right up until the Bismarck put her ass on the bottom with two salvos).

It’s time to get serious about building ships, learning to operate ships, training in how to kill other ships, and getting back to being the deadliest force on the water.  Quit worrying about making sure that you have the right number of sensitivity training officers, and enough Equal Opportunity training hours, and get back to learning how to drive ships and kill the enemy.

It’s time to have a bourbon or a rum and contemplate how far our Navy has fallen in 20 years, while praying we can get our shit together before we have to fight a real Navy war.