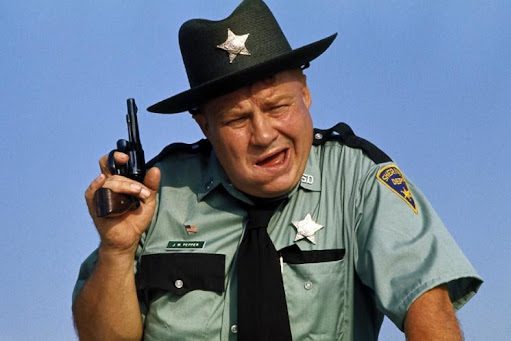 Way back when I was a kid, the guy in the picture above was a character in a few James Bond movies.  (Roger Moore movies as I recall) After watching Mr. Bond completely destroy his Parish, and being told that he has to leave Bond alone, because “He’s a secret agent” asked plaintively: “ON WHOOO’S SIDE?!”

Well, that’s sort of the way I and a lot of people like me are feeling about General Milley “Vannilly.”

“You have to show him respect, he’s the Senior officer in the armed forces” I’m told.

And much like that southern sheriff, I reply “ON WHO’S SIDE???”

OK, I see the uniform, complete with the angry seagull (the screaming eagle of the “hundred and worst”) and all the pretty ribbons… 7 rows.  That’s nice, that’s the same number I have. Jump wings, OK I’ll give you credit for courage… not much brains, but courage. The “tower of power” Spec-for and Ranger tabs… meh, that means you went to some schools. I see one real combat medal, the bronze star, with three awards.  I don’t see a “V” so it wasn’t for valor in combat.  Armed Forces Expeditionary medal with two stars… Yawn, got that, doesn’t impress.

Looking at his career on his wiki page, I’m reminded of something I have long said.  Officers make rank based on being one of three types of people. You can be a freaking war hero, you can be a “system wank” or you can be a politician and policy guy.

Now what a war hero is, should be obvious, and the standard to meet is: Patton, Nimitz, Puller, all of these are of that category.  The downside to that is “hey, you can catch a bad case of the deads.”

A system wank is also pretty easy to describe, the ULTIMATE example is Rickover, but there have been many others over the years.  Guys who brought a new game-changing tool of war to the uniformed services.  Being the guy that developed high altitude precision bombing, the guy that introduced the M1Abrams, and so on.  The danger here is “you can choose to back a losing horse.”  General Mitchel comes to mind, he backed a winning horse and still got fired for it, because it was a damn unpopular winning horse.  The guy that backed the “Sargent York air defense system” is another example… that thing was a DOG, and as a result, his career was dead.

The third version is a guy that comes up with a new way to screw with the troops.  It may be a new Physical Readiness Test (PRT), (the fat boy program) or a new way of training, a new name for a unit, or a new uniform.  The dangers of this? Having the wrong political patron sidelines you until someone else is in charge.  Oh, and you can get a papercut… those things STING.

Systems that he introduced? Oh, he introduced a new way of buying stuff, with the quote: “If we adapt to the changing character of war, and we embrace the institutional changes that we need to implement, then we will continue to be the most lethal fighting force in the world for the next seven decades and beyond. If we do not, we will lose the next war,” Uh, don’t look now general, but…

He came up with the “Army Futures Command” “to take advantage of nearby academic and industrial expertise.” Uh yeah.  Probably got his Legion of Merit for that.

Oh, and he came up with a new dress uniform and a new PRT. Can you guess what sort of officer this candidate is?

Now he would have passed on into obscurity in spite of his high rank but for a few things.

One, he was the Top uniformed officer when we lost Afghanistan, and he didn’t do SHIT about it.  In Senate hearings this week, he said that he had recommended leaving 2,500 troops in Afghanistan, as all of the other generals involved also recommended.  Biden told the press that no one had EVER told him that.  Generals Milley, Miller, and McKenzie ALL say they told Biden that. (SecDef backs their story, in spite of being a politician… that should tell you something.)

When asked why, “if the president refused to listen to his advice to the detriment of the country, he had not resigned in protest,”

Milley answered “it would be an incredible act of political defiance for a commissioned officer to just resign because my advice is not taken,” https://headlineusa.com/sen-cotton-presses-woke-gen-milley-why-havent-you-resigned/

Well General, I’m just a dumb retired enlisted puke, but sometimes you have to say “I can’t take your money if I can’t support your call.”  Senior officers have been doing it for centuries as the last-ditch way to make their political masters understand how serious they are about something.  Further, you wouldn’t have had to resign your commission, just say “Sir, if you insist on doing this, you need to get a new CJCS, I’m going back to the field.”  Ah, but that would take integrity.  You’re busy making up a new dress uniform that looks like what your daddy wore.

The second thing that will ensure he’s famous was his intelligence team’s absolute and complete failure to predict how fast the Afghan forces would collapse, and the gift of billions of dollars worth of military hardware and secret equipment to the Taliban.  You remember them? They’re the guys we went to war to overthrow back 20 years ago.

Finally, there’s the deal I commented on last week or the week before, where this guy decided to call the chairman of China’s Joint Chiefs and tell him, “America isn’t going to attack you, if we do, I’ll call you and warn you.”  Claiming it was because he was afraid that the President was unstable and going to start a war to stay in office.

Now someone PLEASE explain to me how “If you do this I’ll resign” is “an incredible act of political defiance” but calling a prospective enemy’s head general and telling him “I’ll warn you if we are about to attack because my president is crazy” is “a part of my duty”?!!!

Further, this guy doubled down on “aid and comfort to the enemy” with suggestions that the US and Russia send observers to each other’s wargames, and develop more trust by reducing uncertainty over each other’s capabilities… claiming that’s how you avoid a war.  (someone point out to this guy that the USSR and Nazi Germany sent observers to each other’s war games for two years just before 1939…)  Uncertainty of whether or not you can beat a guy is why you DON’T go to war.  If you’ve seen their toys, and seen their techniques, you can work up counters, and fight to win.  It’s why US submarines like to spy on Russian Navy war games, and vice versa.

So again, I gotta ask. He’s the top general? ON WHO’S SIDE?