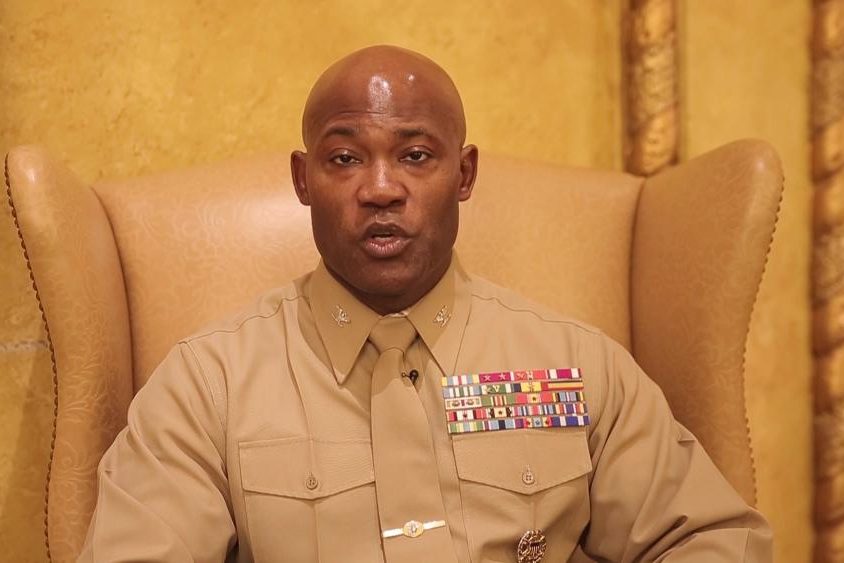 Welcome back to the scuttlebutt.
There’s a lot of targets today, but not a column worth on any of them, so I’m just going to service them as I get to them.  Ready?

Let’s start with the Marine Corps. (oh don’t worry, the rest of the branches are going to catch it too, except for the Air Force which actually managed to not cover themselves in shit this week, and the Coast Guard which we all know isn’t really a military branch… sorry, puddle pirates)

See that fine-looking Marine up there in the picture? That’s Col Anthony Henderson.  The man has multiple combat tours, and while he graduated Cum Laude from Southern University Law Center with a Juris Doctorate (that means he’s a lawyer, but we won’t hold that against him) he chose to go combat arms, Infantry Hoo-rah!  This dude’s been and done, and the men that fought alongside him, those that he commanded, and those who commanded him all say the dude is the real deal.  SecNav Spencer, who he worked directly for, as strategic advisor and military secretary strongly recommended him for promotion.

Because you see, he’s been passed up for promotion three times, and next time is the last time he will be allowed to attempt to be promoted.  If he’s passed up this time, it will be the end of a stellar carrier. Why has he been passed up? The official story is that “well, he needs the edges filed off”… in other words, he’s “uppity”.  A quick look at Uncle’s misguided children shows there have only been 25 black men EVER promoted to general, only 6 made it to three-star, and none have ever made it to four-star.  All 72 4 star generals in the history of the Corps have been white.  Further, of the 82 marine generals serving today, there are a grand total of 6 black one stars and one black two-star.

Now I’m going to let you in on a little secret.  Because the NYT did this article, which then got picked up in various ways throughout the news sphere, Col. Henderson will probably get promoted.  Even the Corps has an understanding of the power of bad press when it comes to appropriations money. The Corps will buckle and promote him, to avoid any more bad press and a lot of angry senators and congressmen.

The sad thing is that they also just killed his career.  See the military has a love-hate relationship with the press… oh they love to get good press, and it gets them more money from congressmen who couldn’t be bothered to learn what we need, and why we need it but see being tied to heroes as a reelection point.

BUT they absolutely HATE bad press, and anyone who is in any way tied to that bad press, whether they called the papers, or one of their allies did… Well, that’s the Godfather coming up and kissing you on both cheeks, looking at Bugsy and giving a nod.  This guy is screwed because the Marine Corps will never forget that they got a black eye because of him.  He’ll get his star, and then farmed out to a looser nowhere billet until he retires in disgust.  It’s a shame, but there it is.

OK Army, now it’s your turn. What in the absolute FUCK is going on in Fort Hood?  That place has had problems for a long time. Remember the Jihadi in uniform that stood up in the PTSD waiting area and shot a bunch of his fellow soldiers? That bastard, one Maj. Nidal Hasan, may he rot and burn in hell, was from Ft. Hood, in 2009. Now we have 15 more soldiers dead, several raped, it looks like they might have a serial killer on the base…

What the actual fuck is going on down there??? Maj. Gen. Efflandt, who was the Base CO and scheduled to go to Ft Bliss to take over the first armored, will instead be staying on to “assist with the reintegration of III Corps” as they come back home from the sandbox.  I’m sure he will also be “made available for interviews, by the investigators lead by General Murray.  Efflandt is probably fucked, and probably deservedly so.  To have that sort of shit going on, on your base, well, your command climate isn’t exactly 5.0 shipmate. Here’s the leading article, there are many more.

Now, let’s talk about the Navy. NCIS and BATFE are saying Bonhomme Richard’s fire was arson… No surprise here, that fire was in EXACTLY the place to do maximum damage, and remain undetected for the maximum amount of time… If you’ll recall, I figured it for arson at the time.

Seems there’s a Sailor who’s getting the “Gibbs” treatment right now.  One thing I guarantee, if it’s hit the press, the investigators are pretty damn sure that it was a crime.  The only thing they may not be sure of is who done it, and why.  Could have been just a completely disgruntled sailor, who hated the navy, hated the command and decided to “fuck them all!”. Or it could have been enemy action.

More to come on this one.  The Navy is still implying that they can save the ship… I’m here to tell you, based on the Unclass pictures I’ve seen, and the knowledge I have of ship repair, Admiral, it’s time to cut your losses.  That thing will cost more to fix than she’s worth, take longer than bringing one out of mothballs, and you’ll never be able to trust that steel.  I know that pride and face are playing a role here, but SIR, swallow your pride and admit this thing is toast.  Bring one of the most recently mothballed ships back out, and have done with it.

OK, for my final act, let’s talk about Portland.  Mayor Wheeler, you remember him? The dumbfuck that joined with the ANTIFA boys in protests and the attempted burning of the federal courthouse, and sobbed like a little girl when he, HE DAMN IT, was teargassed alongside his constituents when all they wanted to do was burn down a courthouse?

Well, it seems his birthday was this weekend, and his allies, trying to help him understand what I’ve been saying about mobs, tried to burn down his apartment building, while singing “Happy Teargas to you”.

They spray-painted signs saying “How much does it take to show you we are serious?” while demanding his resignation and attempting to burn down his building (worth noting, there are infants living in that building, and they were home.) https://thepostmillennial.com/antifa-torches-portland-mayors-apartment-on-his-birthday?fbclid=IwAR1X6vl5BRAoKeoBqiHwb0w8X5gi-1fJiiKPaX92yfHeIaGSfwrUlKXxON4

I wonder how many of the urban renewal techs were people that his District Attorney turned loose when he said he wouldn’t prosecute for disorderly conduct, criminal trespass, interfering with a police officer, or rioting? https://katu.com/news/local/protester-voices-relief-after-charges-dropped-under-new-district-attorney-policy

I do agree with the protesters though, at least partly.  Oh, not the part about “we want you to resign, but only after you disband the police department”. No, I wonder how much it is going to take before this MORON understands that they are serious, they want to overthrow the government by force, and he straight up has an insurrection on his hands.  Asshole, it’s time to call in the National Guard and declare Martial law, before your entire city burns down around your ears.

Mind you I don’t care if Mayor Wheeler dies, but there are a couple of good restaurants down there, and then there’s Powell’s, the book mecca of the west. If they burn Powell’s I may go hunting them myself.

Well, I’ve wandered on long enough. Keep your head on a swivel, it’s dangerous out there, and going to get worse before it gets better.