Sexual Politics: Congress, It’s Your Turn in the Woodshed 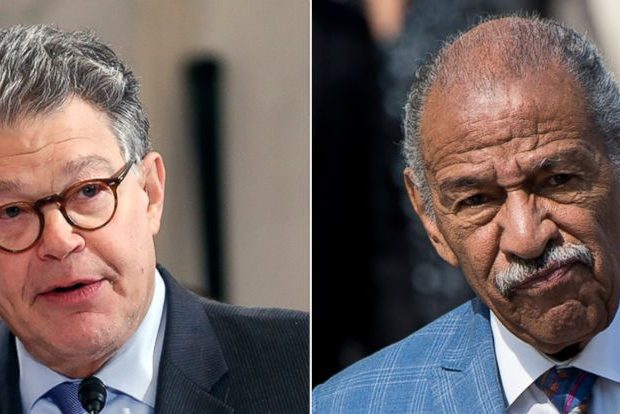 Pour a cup-a joe and gather round gang, I have words, and they ain’t with friends.

Sexual harassment in the Military is a show stopper.  A career ender.  If it happens or is even implied to happen, the best that can happen is a sudden discharge, and I’m not talking about the type that you need to clean up after.  I’m talking about the type that starts at “General Discharge” and goes down hill to “Bad Conduct” or worse.  Maybe with brig time, maybe not.  If the CO doesn’t react “fast enough” in the opinion of our elected masters, his or her career is toast too, or maybe they’ll fire the Command Master Chief/ Senior Enlisted Advisor, and just put such a mark in the CO’s jacket that they will never advance again, “but we’ll ‘em stay in until he or she can retire”.

Now, I’m on board with that.  When the shit’s flying around you, whether it’s bullets, or missiles, or ship killing seas, that’s the wrong time to have to worry if your superior officer wants to do the horizontal bop with you.

The trouble is, it became such a crusade that the very accusation was enough to kill a career, with zero-point shit evidence.  Further it was such an overwhelming concern of our political bosses that we spent so much fucking time on it, so much money on it, that we didn’t have enough time to make sure we know how to do our damn jobs!  “It’s not important Marine, that you know how to set a breaching charge, we have SAPR training to do!” “Listen sailor, that navigation trainer will have to wait, we need to attend sensitivity training!”

Here’s my bitch, it turns out that the same hypocritical bastards that are firing Commanding officers, XO’s and Senior enlisted, for not taking a hard-enough turn on the issue, were themselves, doing, or covering up the behavior they were ruining people’s career over!

Yeah, I’m looking at you Feinstein! Schroeder, Warren, Pelosi you’re on the list too! Then there’s the bastards that actually did the deeds, Conyers, Franken, etc… HOW FUCKING DARE YOU try to hang men in uniform for shit that you were doing, and had a secret 17 million dollar hush fund of taxpayer dollars to cover up?!

Then let’s start on the Media.  Lauer, Rose, NPR news chief Oreskes, NYT political reporter Thrush, political analyst Halperin, Keillor, etc… Basically all the huge supporters of feminism that were clutching their pearls and looking for a fainting couch over Trump saying that “the great thing about being rich is that you could grab a woman by the pussy, and she wouldn’t care” three decades ago, were doing far more than talking about it, they were doing it.  You hypocritical bastards, I hope you end up begging for money on the street corner.

But of course, they won’t. The left has to chastise them for a little bit because they got caught, but soon enough we’ll hear that “it was a long time ago” and “they’re really sorry”, “They understand what they did was wrong, but they have always been a champion of women’s rights…”  The rehabilitation then complete, they’ll go right back to screaming at the right for talking about what they’re doing.

Of course, the Right isn’t without their “Chester the molester” types, the difference is, when they do it, and it gets found out, it’s game over, you’re done.

Oh, and while we’re at it, Ladies, you need a little calibration TOO.  Buyers remorse doesn’t constitute rape, molestation, or harassment.  If you know, and willingly trade, something that you have an inexhaustible supply of, for a better gig, that’s a business transaction.  If you’re working for someone, and they say, or imply, “put out, or you’re fired” yeah, that’s rape.

However, if you say “gee mister Weinstein, I would do absolutely anything to get this part,” while rubbing your breasts against him, that’s on you chickee.  Yes, he’s a pig.  Yes, he should have said “fine, do a better job of acting”, but “the casting couch” has been a known thing for as long as there has been casting.  I’ll bet money Shakespeare had one for pity’s sake, and as long as beautiful women think that sex is a fair trade for a whole lot of fame and fortune, there will always be such a thing.

While we’re at it, if you don’t say anything for twenty to thirty years, then all of a sudden get a case of religion and want to bare your soul, freeing it of this sin, about the time someone becomes suddenly rich, or is running for high office and looks to win?  Yeah, I’m calling bullshit.  Oh, it may be true, but it requires a whole lot more proof for me to believe someone raped you twenty years ago, and you never said anything through five elections… than to believe that someone raped you five years ago, and then gave you money to shut up about it, and you have a copy of the check.

Look Folks, here’s the thing.  This country was founded by a bunch of puritans, the last holdout philosophical followers of that pestilent boil on the ass of humanity that was Oliver Cromwell, may he boil in lead forever. As a result, we have had goofy hang-ups about sex from the start.  Until we get over it, there’s going to be a hypocritical difference between what we say is OK, and what we do when nobody’s watching, for at least some of society.

We all say that men and women (and women and women, and men and men, and oh boy does that feel weird to type for this ol Midwesterner) shouldn’t be fucking each other on a warship at sea… However, any sociologist will tell you that when you put young healthy animals of the opposite sex (sigh, or yes, sometimes of the same sex) in isolated conditions, and expose them to stress, danger, and boredom… (and if you don’t think those go together, you never served in the military) they’re going to fuck.  Sure, as the sun rises in the east, there will be frigging in the rigging.

I can go on any warship in the navy, and find “love nests” in voids, fan rooms, un-manned office spaces, officer quarters that aren’t occupied…  Hell, the one skimmer (surface ship) I was on, had a sign-up sheet by the hour for the CAPTAIN’S GIG.

When it becomes a problem, is when sexual politics affects the working of the unit.  When PO Hotlips gets all the sweet jobs, because she gives a sweet blow job, or when PO stud-muffin doesn’t have to field-day because he field-days the chief’s honeypot, that’s an issue.  Which is why it’s against the rules in the first place!

All that having been said, what the fuck is your sexcuse congress??? You aren’t out 4000 miles from home, in the middle of the desert, or in the middle of the pacific, bored out of your mind- when you aren’t scared shitless.  You’re sitting in Washington DC, the land of power and money, where there are girls (and guys) lined up for the chance to bang a senator, in return for a nice dinner, a little jewelry, or maybe just the ear of a powerful person… (Yes, power is the most effective aphrodisiac known to man.) Yet you would rather grope someone who has made it clear that you aren’t their type, while at the same time, sitting in judgement over someone you haven’t the slightest idea about. Clean your house!

As for the “news, and entertainment” industry, I know you’ve been doing this from the start, it’s in your nature, I get that. Don’t try to come off all holier than thou though, when you’re doing the same thing as you are accusing your victims of.

OK, that’s all I’ve got for this week, gang.  But do this old sailor a favor, try to live up to the standards you hold other people to? And remember, if you can’t live up to those standards, they deserve a little bit of a break too.