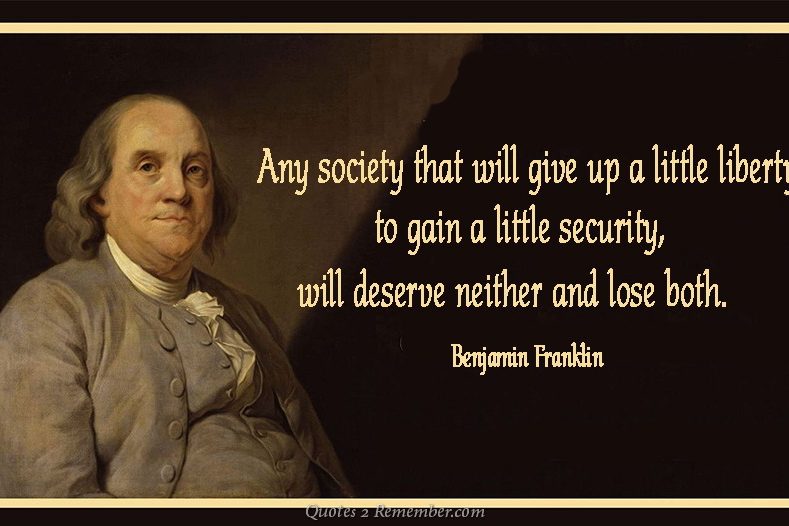 Pull up a chair and have a cup of coffee, class is in session.  I’m going to break with my normal tradition of discussing the events of the day.  This is the first of an occasional series on various timeless topics.  Today, we are going to discuss “Security”.  I know this is going to hit on Thanksgiving, and I’m sorry about that, but Thursday is the day I get published, and with some of the stuff I’m seeing being said, this lecture is needed.

Now Security is a word that means a lot of different things to different people.  The dictionary says: NOUN

2) A thing deposited or pledged as a guarantee of the fulfillment of an undertaking or the repayment of a loan, to be forfeited in case of default.

3) A certificate attesting credit, the ownership of stocks or bonds, or the right to ownership connected with tradable derivatives.

4) A private police force that guards a building, campus, park, etc.  Further it tells us that the origin is from the Latin Securitas or “free from care”.

My what a lot of mileage we get from this word.

With all of those different meanings, is it any wonder that the word means different things to different people?

To some folks, Security means that they’re free from external threats, and are able to go about their daily lives without harassment.  To others, it means keeping the status quo, the security of lack of change.  Then there’s those that see it as the knowledge that someone or something (like the state, or mommy and daddy) are always going to take care of their needs.

There’s security of your person, knowing that no one is going to physically assault you, there’s financial security, knowing that you are well enough off to survive the unknown future.

But here’s the thing: There really is no security except that which you make for yourself.  Any other form of security is merely the surrender of your fate to someone or something else.  Now some folks find great comfort in that… The knowledge that mommy, or daddy, or the government or God is going to make sure you’re safe, and free from want.

These folks are the tyrant’s natural prey.

Anything that you have given the power to grant your every need, has the power to take from you your every possession as well.  Folks, that’s not security, that’s surrender.  Oh, it’s highly thought of in certain circles. Most religions for instance, (especially the Muslim faith) teach that surrender; “Ishnah Allah,” literally “as God wills” is the whole of life.

Is it little wonder that the tyrants of the world love this sort of mindset?  Just surrender, let us take care of you, we’re here to serve you… (and in the corner, there’s a thin, well dressed man in a dark suit, smoking a cigarette, saying “presenting, for your approval, to serve man.”)

If you want Uncle Joe to take care of you, to make sure that you get your ‘Rona check, and pay you to stay home, to make sure you don’t get the ‘Rona, to ensure that “the man” doesn’t come and harass you while you’re smokin’ your pipe, or shootin your shit, you are in for a rude awakening sunshine.  That will only last until someone, maybe that very same Uncle Joe, or maybe his friend, Auntie Ho, decide that they have enough power and control to do what THEY want to do… and I promise you, what they want to do is never what you want to do.

If you don’t believe me, there’s a shit ton of folks that have survived this sort of promise, this bait and switch.

Talk to the survivors of literally any of the communist regimes.  They all have a similar story.  “This guy came and promised us that he would punish the BAD men, would take from them and give to us, would make sure that everyone is equal.

Well, here’s the thing, the only thing such promises end up with, is everyone except the party few being equally poor, and equally fucked over.  Socialism and Communism have one universal constant, Morons vote it in, and brave men have to shoot it out, or it has to completely collapse, and you go through a period of literal starvation followed by a strongman taking power, and the cycle repeats.

Now I mentioned at the beginning of this little discussion that there’s more than one type of security.  There’s the security to make your own way, knowing that nothing is big enough and powerful enough to keep you from doing that.  That takes a little doing, because  it means having a government that is just strong enough to keep people from burning down your shit, without being strong enough to take your shit.  That’s a government restrained by laws, and by the threat of internal force from the governed.  A government with the awareness that it is more powerful than a person, but not more powerful than “the people”.  That’s the government design our founding fathers tried to set up.

That’s why we have all of those “negative rights” as Obama so disparagingly phrased them.  Negative rights are the only form of rights that are not tyrannical. Negative rights ensure “this may never happen, this the Government can not do.  “Positive rights” on the other hand, ensure that you have the right TO something… Problem is, that “something” always involves someone else’s labor.  You have the “right to housing”?  What about the guy that builds the thing, when you don’t have the money to pay him?  You have the right to health care?  What about the Doctor that put in 12 years getting that degree, doing 20 hour shifts at residency, and generally working his ASS off, doesn’t he have some rights?

Now let’s go back to that word “security” for a second, because there’s another type of security that plays a role here.  There’s this little thing we call “Operational Security” or OpSec.  One of the Maxims that was drilled into us in the submarine community dealt with OpSec… Well, actually many of them did, but this one is particularly on point.

When you realize you’re detected, and they’re following you, or lining you up for a shot in war time, you do something called a “Break Trail” maneuver.  There are many of them, and I’m not going to discuss them here, because I practice Opsec.  But the key point to the maxim is this:  Make your FIRST break trail attempt, your best.  Don’t pussy foot around, half hearted attempts just give his operators more experience at following you, and makes them harder to shake.  Don’t let them know you are aware that they are following you until you’re ready to shake them, and give that first shot everything you have.

(In some circumstances that might include what we jokingly called a 21 inch countermeasure… it means shoot a torpedo at the fuckers. Even if you don’t have a perfect solution, it’s going to make them far more interested in getting the hell out of the way of that weapon, and far LESS interested in continuing to follow your ass.)

This is the principle of OpSec at it’s finest.  Don’t let them know anything, maintain secrecy until YOU are prepared to relinquish it.

This is a sound principle in everyday life.  If you are showing up on people’s radar as a threat, they’re going to watch you.  If you look like you’re going to be a problem, the sort of power that you might be right to rebel against won’t wait for you to take action. If they know you’re a threat, they will end you.  Be this power a tyrannical boss that you’re going to sick OSHA or their boss on, be it a bully in an organization, or be it a government. the principle is the same; don’t give your enemy warning, make the first shot the best one.  This of course comes with challenges, you want to make damn good and sure that the time has come for that maneuver.

For example, we wouldn’t use a 21-inch countermeasure during normal peacetime, just because we’re being followed by a hostile nation’s submarine… That way starts wars that didn’t need to start.  You don’t shoot that tyrannical boss, just because he gives you all the shitty jobs.  You don’t pull a Timothy McVey, ever.  That was a straight up terrorist attack, even if he had been right about the government being a tyranny (he wasn’t, not by a long shot) the target he hit was worthless.  It killed a lot of kids and functionaries, it destroyed a government building that was pretty irrelevant to the running of the nation, it was meant to cause fear, and chaos.  If the time ever came to do that sort of thing, find some of the folks that do Insurgency/counter insurgency and ask them what sort of target to take down.  But if you were going to do such a thing, do it in private, and make sure that they are comfortable, VERY comfortable with you.  If it got bad enough that you should be asking such questions, it’s bad enough that your friendly local former spook or COIN expert will just make you disappear if he thinks you’re an agent provocateur.

Wanting security is an understandable thing, everyone wants security, but make sure you know what sort of security you want, and that you’re willing to pay the price for it.   Some forms of security come at way too high a cost. And if you are thinking that a power is out of control, for Gods’ sake, don’t be yammering on social media, or the interweb about it.  If you’re wrong, you just look like an idiot, and if you’re right, well you’ll have given that power fair warning that it needs to do something to you, before you can do something to it.