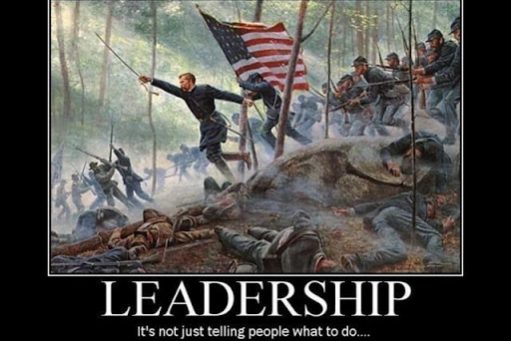 Pull up a chair, pull a draft and let’s talk.  Well, last week we talked about security, this week, I’m going to discuss leadership.

But first, let me mention that the Navy finally grasped the nettle and admitted that the Bonny Dick, (the Bonhomme Richard) is toast, and going to be scrapped.  The bill for repair would have been somewhere between 2.5 and 3.2 Billion dollars, and five to seven years.  A new one costs 4.1 Billion. They also looked at redesign and making the hull something else… That was going to come in at somewhere north of a billion, decommissioning, salvage, and scrapping is going to cost us about $30 million and take 9-12 months.  While I’m not happy about being right, I’m also not shocked.  The Navy usually spends months debating options before bowing to the inevitable when the inevitable is painful.  This was no different.

Well that makes a nice segue into the discussion of leadership.  In my Naval career, both in and out of uniform, and my law enforcement work, I’ve had the privilege and sometimes the burden of working for about twenty captains closely enough to learn their leadership style. Then, you add in J.O.s, what the army calls “field grade” officers (O-4, and O-5s) and more senior noncoms and their civilian equivalents than I can remember.  I’ve also been in a few of those positions myself, from Shop Leading Petty officer, to Department head (at a Naval Brig) to running a training group.  So, suffice it to say I’ve seen a lot of leadership: good, bad, and indifferent.

First let me mention that leadership is downstream of culture.

In the Military, you are taught from day one that if an O-6 (Navy Captain, Colonel to the rest of the militaries) tells you to do something, you DO it.  Unless you have a god damned good reason why not, reasons that involve things like “that will get me brought up before an international court to answer for war crimes.” Or “that will start world war three, and we don’t have that sort of authorization” you do what the Bird says!  That’s culture.

Then you get to a command where most of the employees are civilians, and you find out that the GS-14s and the ESEs who have been there for 20 or 40 years figure THEY are running the show, and when you give an order they don’t like, they slow roll you, knowing that you’re going to transfer in 24 months… That too is culture.

Many years ago, the LAPD Rampart Division was well known for having throwaway guns handy for when they shot someone… Yup, culture.  When I was Work Programs Director for the Puget Sound Naval Regional Brig (our customers where every military command from the Rocky Mountains to half way to Pearl Harbor, and from just north of Frisco to the north pole) one CVN out of that entire area gave us 75% of our business. (it’s worth noting that there are three carriers in that area, and just one of them sent us most of our prisoners.)  That too is culture.

See, here’s the thing, if you can’t change the culture, your ability to change behavior, or to effectively lead, depends on whether or not you want to lead in a direction that the culture will support.  Further, you’re fighting human inertia.  The older the organization is, and the bigger it is, the more inertia there is.

Say you’re a new Commanding officer who’s come in.  You have this great idea for how to make the shipyard more efficient!  You can see, with your own eyes that there are some significant inefficiencies that could be addressed.

For example, take repair of a major pump.  The electricians come in, disconnect the pump electrically, and then they go and have coffee.  The outside machinists come in, unbolt the pump, disconnect the motor, and they too leave.  The riggers hook up the motor, and haul it off the ship, to another set of electricians that will rewind it, then they haul the pump out, and take it to the inside machinists to rebuild.  Meanwhile the electricians have been grabbed by a different project, and the outside machinists have too. Eventually, the pump is rebuilt, the motor is rewound, and it’s time to put it all back together again on the ship… But you can’t get the guys that took it apart to put it back together again, because they’ve moved on to another project.  Oh and ships aren’t like cars, each one, even in the same class, is different. Knowing exactly how it came out, is paramount to putting it back in quickly and efficiently.

As the CO, you think that if we could have a Product line that just did pumps, and were cross-trained, so that a smaller group of mixed electricians and machinists worked together, removing the pump, then reinstalling it, that would be more efficient.

Well, if this were an all military command, you could just order it, and say things like “this is the way, the train is leaving the station, get on board or get run over!” people would do just what you said.

Say that to a bunch of union guys, and people who made their high position through “the way we have always done things” and you’re going to get a lot of “I’ll get right on that sir” (which is militariesse for FUCK OFF, I’m going to slow roll this until you go away.)  They find ways to drag it out, and in less than two years, you are GONE on to another command, and the new guy doesn’t feel the same urgency to do things this way, so the concept dies.

I’ve seen it happen.  What happened there was the CO did not understand culture, and while he was a good captain, and had a very good idea, frankly he sucked at leading, outside of his experience zone.  A little note here, it’s got to be a bitch to spend 30 years learning that when the bird says JUMP you ask how high on the way up, only to find yourself in command of a few thousand or fifteen thousand civilians that think the captains word is a nice suggestion, lets see what the union and the shop superintendent thinks.  That’s culture shock.

Is it that bad? No, not quite. If you give orders that make sense, everyone will follow them… BUT give orders that fly in the face of culture, and without finding a way to CHANGE that culture, and you’re going to find out just how little power you really have against an embedded, resistant, group that has federal employment laws and seniority on their side.

Hint, you really have to do work to change culture and if you go about it wrong, you won’t be there long enough to achieve your goals.

Once someone makes GS 12 or above, they have to really mess up (sexual harassment, theft of government equipment, security violation, or something similar) before you can think of firing them. Trump found this out when he tried to get rid of embedded senior staff members that were still GS or ESE and not political appointees.  It didn’t matter that these guys were doing their very best to sabotage his goals, unless he could pin a crime on them, he couldn’t get rid of them.  He passed an executive order creating a new category of employee just so that he could get rid of the people that were actively trying to sabotage him. That’s looking to go down in flames, it’s probably not even going to last until he leaves office.

About the only thing you can do to someone like that, is move them off to some do nothing, dead end job, and hope they quit or are in a position to no longer stand in your way.  The trouble with that, is twofold:

See this is a truth that I learned when I was running the work programs department at that Brig.  There’s just not a lot more you can do to a military prisoner to make his life worse.  Further they have rights, and if you do something that’s not legal, you’re going to wind up on the OTHER side of the door. (I know, my old CO did just that, about a year after I left, the IG came down like the wrath of God, because he was having sex with an enlisted staff member, ON POST, with prisoners on the block, and was fucking at least two of the prisoners in return for special considerations.  He served time.  No, I didn’t know any of it was going on, if I had, I would have dropped the dime on the fuck myself.)

In such circumstances, you must find other ways to motivate and to lead people.  Yes, it can be done, and you don’t need to “Make them your friend.” In point of fact, THAT doesn’t work.  If you try to make the prisoners your friend, you will end up being the one manipulated, used, and you’re going to end up dancing to their tune.

A big part of that is making culture work for you and changing culture when it won’t.  It’s hard.  It involves patience, and cooperation, not getting everything you want, but identifying what you must have, and giving way on the things that you can, in order to get the things you must.

Failure to do this, means that at least with the culture you’re dealing with right now, you are going to fail miserably.  That’s what happened with Trump, he didn’t understand the culture he was in charge of, (the swamp, if you will) and as a result they dragged their feet, slow rolled their actions, and found a million little ways to put wooden shoes in the machine.  And they found a way to get rid of him.

Now let’s compare and contrast Biden.  Assuming Trump doesn’t pull out a miracle, Biden for better or worse, will wind up in the oval office.  Now he understands the swamp intimately. Shit, he’s been a denizen of it for over half a century.  So, he won’t have any problems from the Government employees… BUT, what he doesn’t understand is the greater populace. He is already pushing a lot of wrong buttons, and he’s got close to, or over, half of the nation predisposed to find ways to screw with him.  Further he’s got a fair number of people in his own party that are already rebelling because he’s not radical enough!  Add to that, the man is just not healthy, and his VP couldn’t even take her own state in the primaries.  I wouldn’t give a plugged nickel for his chance of surviving the four years in office. And between him and his VP, neither of whom understand the culture outside of the coastal big cities, I am really doubtful that we get through this presidency without the maps going all lines and arrows, and some sort of civil war.  It COULD happen, but it will take someone helping him to understand the culture outside of the little inbred communities he’s been representing for fifty plus years, and a lot more grace and leadership than he’s shown to date.  I pray he finds the help, but I ain’t betting on it.  His VP has even less chance, and when (probably not if) she takes over, we’re in for a bad time.  Based on her record to date, she couldn’t lead a group of old-school sailors to a whorehouse after a nine month cruise.

Keep your head on a swivel, we’re in for interesting times.