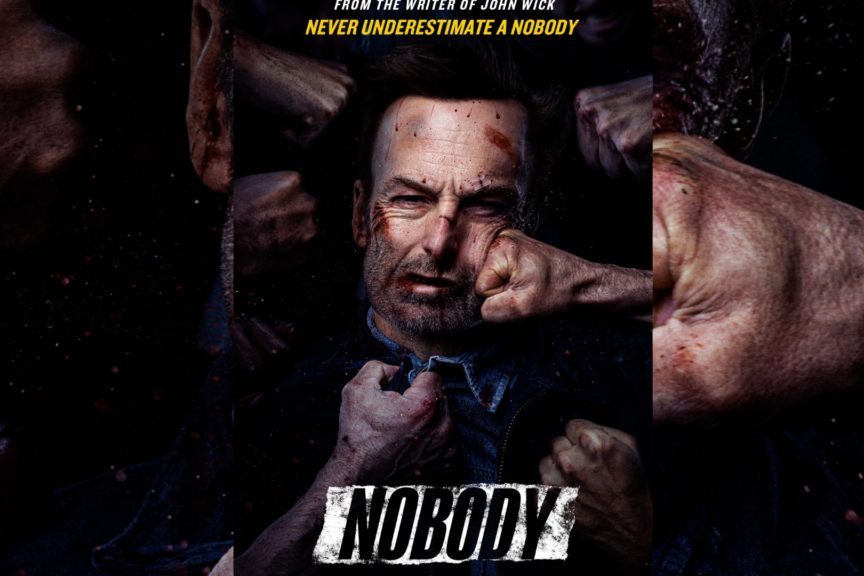 Well, I’m so pissed off with my day job, and the politics therein that I’m looking at putting in my retirement papers effective either July or maybe October, I’ll see how the retirement seminar I have this month breaks stuff out.  As it stands right now, at MOST I will stay until Oct. of next year, but unless things change, and there’s two chances of that: FAT and SLIM, and Slim is in the Russian navy, so…

The point is that I don’t want to talk politics tonight, I’m too wound up for that. So instead I’m going to do some reviews, and just a little “sort of politics” because the stupid on this is just impossible to ignore.  That will be closing thoughts.

Caught a movie in the theater last week, for about the first time since all this shit started. “Nobody.”  Think of it as a comedy action movie.  It’s billed as an Action, Crime, Drama… But if you have my sense of humor (or my wife’s) it’s also an awesome comedy.   They may not have meant it to be, but it was.  Bob Odenkirk plays Hutch Mansell, he’s a wage slave, seems to be an accountant, every day is a rerun of the day before, with a sexless marriage, a kid that thinks he’s an incompetent jerk and a pansy… Appearances can be deceiving, especially when you want them to be.  Anything more would spoil the show.  Christopher Lloyd steals the show, as Hutches dad, an old retired former FBI type, who’s rotting in an old folks home and waiting to die… I give it four bullets, it’s FUN, and it doesn’t take itself too seriously.  Caution, blood and gore abound.

Then there’s Tom Clancy’s “Without Remorse.”  Look this was a decent show.  It was NOT Clancy’s book, in any way shape or form, but it was a decent show.  In Clancy’s version Senior Chief John Clark deals with some drug dealing pimps in very graphic and vengeful ways that they desperately deserve.  He’s not a nice guy.  More like the version of James Bond from “A Quantum of Solace” Oh he does what he does for the right reasons, and the bastards that he tortures and kills desperately deserve it, but it’s personal.  In the end, the CIA offers to make him disappear, and go into their world as a “trouble shooter” with a new name and new everything.  In this version, Instead of Nam, it’s Syria, and Senior Chief Clark is a family man, who is planning on retiring, before being made a part of something that he doesn’t know what the hell is going on in.  The issue I have with the movie, other than they should have made it with a different name, (‘cause the only acquaintance it has with Clancy’s work is some of the character names, and the fact that Clark is a SEAL) is Clark’s boss, LtCDR Greer, who’s supposed to be Adm. Greer’s daughter.  Yes, they have a Female Lt commander SEAL.  Oh it will probably happen someday, but not today, or in the near future. We are still to have our first female pass BUDS, and it takes 10 years to make Lt. Commander.  Less virtue signaling PLEASE.  I don’t care that you made John black, it doesn’t matter to the story, but fine if you need to throw the libs a bone, Gods know there’s enough guys in the Teams that look like him.  But she was a bit too far.  Still I’ll give it three bullets, it’s  an OK show, just don’t pay full price, and DON’T expect to see Clancy’s story, you will be disappointed.

Then there’s TV. Binge watched “Shadow and Bone” Apparently this was a Young Adult book series, the “Grishaverse Novels.”  I haven’t read them, hadn’t heard of them really. It wasn’t bad, combining Magic and gunpowder at about 1880s tech level.  The whole thing tastes very Russian.  The scenery and the cities are very eastern European, (I just looked it up, it was shot in Budapest.)  They are worth binging, it’s only 8 episodes, and I’ve watched worse.  It was good enough that if they come out with a second season, as they are certainly set up to do, we’ll tune back in. 3.5 bullets.

OK, now I Threatened promised I would get into some politics, so here it is. (this is your chance to bail out before it gets political)  Bill and Melinda’s divorce.  Look, I get that they’re public figures.  I get that they’re richer than SHIT.  It’s their business.  Leave it the FUCK alone.  And some of these vultures need horsewhipped.  Read an article today in the Seattle Fish Wrapper, from the A.P. quoting some git named Linsey McGoey, a professor of Sociology (emphasis on the Socialist part) at the University of Essex.  This raging Twit (that’s probably actually spelled with an A) wrote a book about Philanthropy “No Such Thing as a Free Gift.”  It seems that she absolutely hates Bill and his soon to be Ex.

Among the bits they mentioned in the article was: “”People do fear that when a divorce like this happens, it can really emphasize the volatility surrounding private giving and the fact that private giving is so contingent on the whims of a couple,” McGoey said. “The fact that we don’t really know the long term ramifications of this divorce on the foundation just highlights the fact that we are too reliant as a society on the whims of wealthy people when it comes to voluntarily distributing their excess wealth.””

OK you little socialist witch (with apologies to all my Wiccan friends) let’s look at this.

First off, let’s look at some of the keywords here. Private giving, Whims, and Excess Wealth.  Ms McGoon seems to feel that the world would be much better off if SHE (or a committee selected and appointed by her) forced the giving, and got to determine what “excess” looks like.  Yes, I know, McGoon, you feel that no one should have more money than you, and that you should be able to determine what’s more important and worth spending on (one of her pet peeves seems to be that Bill as a personal thing against Polio, so he spends more money on it than he does on AIDS. Well forgive me if I agree with Mr. Gates on this.)  But the thing about it, is that it’s BILL’s and MELINDA’s FUCKING MONEY.  You didn’t earn it you little ivory towered twit, you don’t get to determine what it’s spent on. They could spend it on gold coins for a swimming pool ala Scrooge McDuck and it would STILL not be your call! If you don’t like what they’re spending money on, why not form your own charity, and give away YOUR money?  Based on what you’ve been publishing, and the price you’re asking for it ($54. For an EBOOK written in 2015??? Kiss my writer’s ass, you communist bitch.) and the fact that you’re a tenured PHD at one of the biggest colleges in the world, leads me to believe you’ve got some buckage… Yet I see no McGoey foundations.  Typical, Marx was a dreamer that never amounted to much either, and also believed that he should be given authority over how much money someone is allowed to have, and what they’re allowed to spend it on.  These ideas are well over a hundred years old.  McGoey rants about the stupid ignorance of Adam Smith… and how that’s “old thinking” well, Marx’s ideas date from the 1800s too, and while Smith’s ideas have taken us from a situation where 78% of the world lived in extreme poverty to the modern world where 9% dwell in that state, Marx’s philosophy has created on the conservative end, 78 million corpses. (most probably more than 100 Mil.)  I know who’s ideas I like better, results tell the tale.  I would say “Fuck you McGoey” but I would be afraid you would want to take me up on it, and I don’t want what ever social diseases you have.