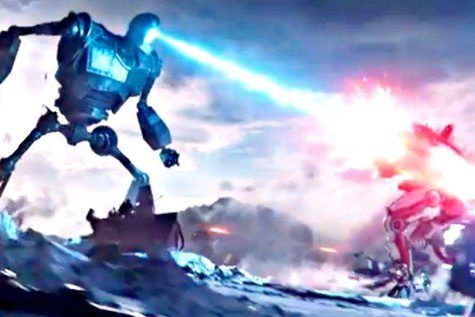 Welcome back to the Scuttlebutt, slide into a bench, grab a cuppa and let’s talk. I’ll try my damnedest to avoid spoilers, during this review.  That said, here we go!

Last Saturday night, the wife and I, the son and his girl went to see the drive in double feature: “Ready Player One”, and “Tomb Raider”.  Yes, we still have a drive in, eat your hearts out!

Let’s cover Ready first, as I have nice things to say about it.  OK now I haven’t read this book as a book. Yes, I know, I’m dink. (that’s submarine speaks for delinquent in Qualifications)

Hey, only so much time, and so much money, I’ve got a literal pile of books that I’ve bought but haven’t read, either because I need to write (don’t forget I’m a novelist too) or because I just haven’t gotten the time yet, or some other book got my attention first.  (yes this old squid and his wife probably have more books than some small libraries. When she moved in we found we had about 75 duplicates because our tastes in books are that similar… Of course, that’s out of well over 400 each, so…)

There’s some chirpiness that makes the bad guy look a little like Amazon, and I’m certain that was intentional, but I can live with it, because 1) it wasn’t obnoxious, 2) the plot drove it, vice it being the whole of the plot. 3) it was FUN.

I’ve seen whines that “they didn’t reference this particular nerdiness that I love”.  Shit dude it’s a two-hour movie, and the whole damn thing is CRAMMED full of inside jokes and references to this or that cultural nerdism (totally a word, shut up spell check). That’s the problem with movies, you just can’t get everything in one that you can get in a book.  (that’s why we still read books! That and my imagination is far better than most director’s visions.)

Now, that was the good, regrettably I have to cover the bad as well. Truly, “Tomb Raider” wasn’t “bad”, just uninspired.  There were a couple good gags, and as an origin story I guess I’ve seen worse, but it was just not up to what I expect of Laura, and damned predictable.  Seriously, I’ve seen better stuff released straight to video or on Netflix. Save your money, wait for it to come out on cable. Watch “Bright” instead in the quiet of your own home, it’s a better flick.

Well, that’s it for this week, I’m trying not to make this a strictly political blog, Gods knows there’s enough of those running around.  So take it easy, and I’ll see you next week.

Oh, one passing thought, if you follow a faith, say a nice word for an old shipmate of mine, Tommy Fines, MM1 SS (A-Div) one of the last of the old school a-gangers. Tip a glass for him, if you would be so kind. Sailor rest your oar, we have the watch.