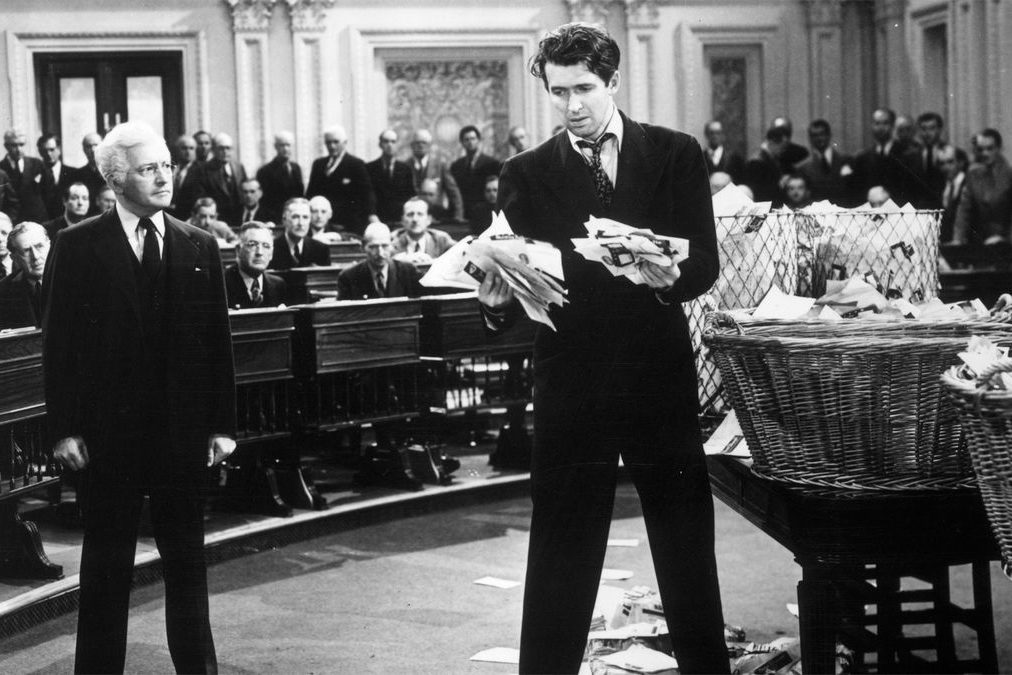 Welcome back to the Scuttlebutt, pour yourself something, and let’s talk.

The picture above, is from what I consider to be a classic movie that desperately needs to be either mandatory watching in High School, or rereleased, and maybe re filmed if it could be done without Hollywood fucking it up. (Which I doubt, they would have to make it “woke” which would ruin it.)  The film is called “Mr. Smith goes to Washington” with General James Stewart in the staring role.

Now, this thing was filmed in 1939, which should tell you (if you don’t already know) that the problems we have with that cesspool on the Potomac, are nothing new.  The director and producer was Frank Capra, one of the top ten directors in the history of movie making.  It’s about an average guy, just Joe Shmuckatelli, maybe a little more honest than most, a little naiver than many, who winds up appointed to fill a vacant seat in the senate, and his adventures trying to deal with the machine politics.

As an aside, this is why I fear Hollywood would mess it up.  They would have to have Mr. Smith be some sort of crusading pregnant migrant lesbian from Honduras or something.  The point of the whole movie is that this guy is MR AVERAGE.  He’s not some sort of crusader (at least not at the start.)

The movie wouldn’t have the same impact staring someone who makes up less than one percent of the population, it needs to show that it doesn’t matter that you’re a white male with an upstanding record, and a hero to a national boy’s organization, if you buck the machine, they’re going to try to feed you into the gears.

See that was what it was called back then, “the political machine.”

Now we call it “the swamp.”

Which one is more accurate? Hard to say, but they both get the meaning across. By the way, it’s interesting to note, that when the movie was released, “Washington insiders” (IE the swamp dwellers) lost their fucking minds and attacked the movie, the stars, the writers, the producers, probably the guy that made popcorn for the showing…  It was also banned in Nazi Germany, Italy, and the USSR because it showed that, messy or not, democracy WORKS.

I didn’t start out today to talk about this movie, except peripherally, because it was my first experience with the concept of a Filibuster. See, back when I went to school, this movie, black and white, with dated phraseology and all, was shown in history and poly sci classes annually, as a study of how the system works.  There’s a very famous scene in the flick where Jefferson Smith (Jimmy Stewart’s character) delivers a filibuster for something like 24 hours, to attempt to bring the truth to light about a shady deal.

This thing, a Filibuster, is what I really want to talk about today, and it’s only a sidelight of the true point of this piece.  Our government in its current form, with some minor modifications, and one not so minor, has been around since 1788, when the constitution was written, to replace the Articles of confederation (which didn’t work worth a damn.) In those 234 years, there have been a total of 16 changes (the first ten of the 26 amendments, also known as “The Bill of Rights” were passed simultaneously with the constitution itself so I don’t really count them as changes.)

Now there are some folks that would tell you that anything that’s that old needs to be thrown out, re-written for the modern world, changed to meet the new sensitivities… And all the other handwavium that translates as “this old document doesn’t let me do what I want to do! Therefore, it needs to fucking GO!”

To which I reply “over my dead body, and you’ll go first, ‘cause I’ll pull the trigger.”

This is the oldest continually operational government instruction manual in history, for a reason. (I should mention that what I consider to be the one major change, is the Seventeenth Amendment, in 1913, that allowed for Direct Election of Senators. They used to be appointed by the state government of the various states, with the thought that the house was the people’s reps and the senate was the state’s reps.  Honestly, I’m not sure that wasn’t a better model than what we have now.)

The whole preceding seven hundred and sixty words or so was the background to the point that the various systems in place in the Senate and House rules were put there for a reason, and removing them without a VERY good understanding of why they’re there, and a FULL understanding of the first, second, third, and FOURTH order repercussions of removing them is a VERY BAD IDEA ™.

The Democrats have, over the last fifteen years or so, repeatedly removed systems in the House and Senate rules that were designed to protect the party or parties in the minority from the whims of the party in the majority.  They have done this in the guise of “Creating a More Pure Democracy.”

Well, let me explain something to these nimrods: a pure democracy is two wolves and a sheep voting on what’s for dinner.  The guys who sat down and studied all the various forms of government, their good, and bad points, and how they stepped on their cranks in the end, realized that a pure democracy is a VERY BAD IDEA ™ that always ends up in tyranny.

They eschewed this model and promoted the Constitutional Republic.  The idea being that a Constitutional republic protects the interests of the minority from the whims of the majority, and ensures that there are certain things the government is forbidden from doing.

See, here’s the funny piece of all this: Every single time that the Democrats have removed a protection that prevented the majority from riding roughshod over the minority on something, it has reached out and punched them in the privates, HARD, and they’ve cried that: “Well that’s not fair!”

Lehman’s second rule of politics is; “Never create a rule or weapon that you wouldn’t like to hand to your opponent to use against you.  Because it WILL happen.”  The Democrats don’t seem to get this basic concept.

Right now, there’s a HUGE hue and cry, especially by the FAR left, that we need to get rid of this concept called the Filibuster, because they have a Senate that is evenly split, 50/50 with the vice president as the tiebreaking vote.  WITH THE ISSUE that if the minority party wants to Filibuster, they can keep a bill from being voted on.

Well, that really bothers the far left, because they can’t ram through some of the bullshit that they want, as long as the Republicans say “NO, we’ll filibuster this one, and once you bring it to the floor, we’ll be in filibuster mode until the end of the session, no more business will be conducted… So, if I were you, I wouldn’t bring it to the floor.”

It’s worth noting here that even if they removed the filibuster, they probably will not get some of their “voting rights” bills to pass. (Voting rights, in this case, means: any ballot received in the mail must count, you may not question it, you may not ask if this person really filled out the ballot, you may not ask how a one hundred- and fifty-year-old man is voting, or why the address that the ballot came from doesn’t EXIST, or why Jose Jalapeno is voting when he’s not a citizen, just count the damn ballot, I don’t care if it’s got a Chinese postage cancelation.)

See a lot of the stuff they want to pass is too far left for even some Democrats to vote for… But they figure they can bully the few holdouts or buy them. (And we’re back to Mr. Smith, above.)

The Brass Clad Bitch to this whole thing is that the midterms are coming up this year, and even the most partisan news polls suggest that they are going to lose their majority in the house, and their tie in the senate.

“The Squad” and the rest of the far left  posse,  are looking very short term and thinking “we need to get this passed while we still have time” with the implied “once we have it passed, we will have a majority forever.  Who votes don’t matter, it’s who counts the votes that matter!”  I believe they are living in a dream world.  I don’t think they can pull off a big enough voter fraud to overturn the amount of disgust that the majority of the United States holds for them.  (At least not without making it so obvious that they start a shooting war.)

And the problem is that once they do get rid of the Filibuster, if they lose the Senate and the House, I promise that the Republicans will do to the Democrats exactly what the Democrats have planned for the Republicans.  In short, the same thing that happened when they changed the voting rules for judges, twice.  One would think that after getting their nose rubbed in how bad of an idea this is, TWICE, they would learn… Seriously… Quit making the same mistakes over and over people!

There’s a whole slew of other topics I could rant about this week:

Including the disgraced former acting director of the Fearless Band of Idiots advocating for massively more surveillance on the roughly half of the nation that doesn’t believe the 2020 election was completely clean.

See he thinks those folks are Domestic Terrorists in waiting and bear considerable watching. The money quote on this is: “I can tell you from my perspective of spending a lot of time focused on the radicalization of international terrorists and Islamic extremist and extremists of all stripes … that this group (business owners, white people from the suburbs, educated, employed) shares many of the same characteristics of those groups that we’ve seen radicalized along entirely different ideological lines.” —Andrew McCabe

(Mr. McCabe, there’s some gentlemen outside that want to talk to you.  A Mr. Mason, a Mr. Jefferson, and a General named Washington.  Something about the fifth amendment?)

This guy is creating a self-licking ice-cream cone.  You start stepping on “this group’s” rights against unreasonable search and seizure, you WILL CREATE the very radicalization you are concerned about. (sigh, and we’re back to “stop making the same mistakes”)

Then there’s the mess that the COVID policies and other decisions by our pants shitter in chief have made of the economy, the profiteering that Nancy Pelosi has been performing on tech stocks while making the rules for the tech companies, the fact that Kneepads Harris can’t keep anyone on her staff for more than a couple months (which should say something about her potential for further office,) the SCOTUS case on the Jab, (which as this goes to press, is still up in the air,) then there’s the whole shitstorm that is Ukraine…

In short, I could go on for another few thousand words, but I’m going to spare you that.