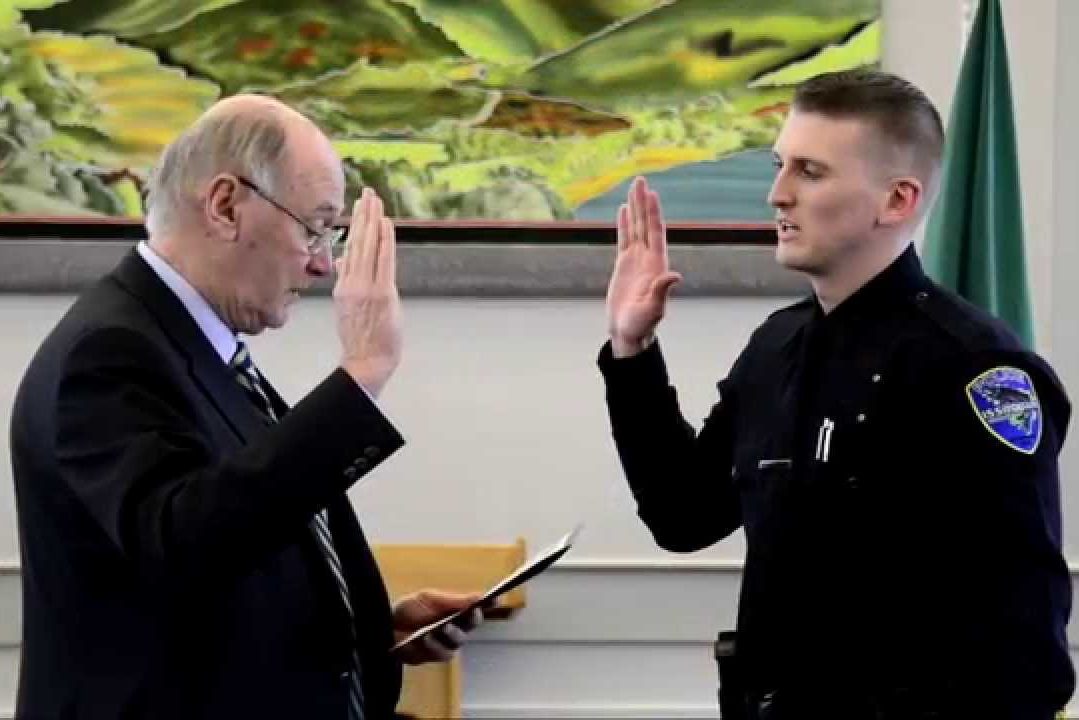 I find myself back talking about the boys in blue today because that seems to be what’s on everyone’s lips.  Pour yourself something and let’s talk.  I tried to find a shot of myself in my old cop uniform, from back in the day…

But if I have any, they’re well buried, and I can’t find them, so here’s a shot of some folks doing what I did, in the spot where I did it.  Taking the oath to serve.  Not to serve black citizens, or white citizens, rich or poor, but to serve the whole of the community.  I know some folks will tell you that’s not the game.  They’re liars.  We didn’t take the oath to serve folks that looked like us, and much like the Navy, I didn’t see race in the suit, I saw behavior.  OK, I’ll admit to one thing.  When I got the “No Habla” from a mofo with MS 13 tats who I had heard speaking English as I walked up, yeah, I saw race then. Honestly, that was it.

So, let’s start with the circus that has been law enforcement in the news this week.

I’m going to start with the death of Officer Sicknick.  Is it a shame that he died?  You damn betcha.  From what I have read about him, he was someone I would have gotten along fairly well with.  He was stuck doing a shitty job, and trust me riot duty is a SHITTY job, even if you have the full equipment, and he didn’t.  His agency failed him, he was pressed into service on a riot that should have been dealt with by folks in full tac-gear.

That being said, I have a real problem with the Democrats and the Press waving his bloody shirt and telling the world that “those evil double bad nogoodnik right-wingers killed this fine officer.  See we got a steady stream of that for the last three months, only to find out, when the Medical Examiner’s report comes out, that the dude died of a series of strokes.  Furthermore, when asked if there were any preexisting conditions, the ME clammed up, with “we can’t talk about that, sputter, HIPA sputter.”  Translation, yeah, he probably had a PEC but a D.C. ME isn’t going to admit that, when he’s already blown the sweet little murder case the DA was trying to tie to a bunch of guys that had nothing more than bear spray.

Yes, I say nothing more than bear spray.  I’ve been hit with the good stuff at least three times.  When I say the good stuff, I mean the police and prison riot issue 10% OC gel foam.  This shit sticks to you like “Great Stuff” insulation.  In training, you have to get sprayed with it and then fight for three minutes against a guy in a redman suit. (think riot armor with extra padding) I’ve caught it in the field as well.  When you’re in a ground fight with a guy, and he’s going for your gun, your partner is going to spray the guy.  He’s going to get you too, and this clown was what we called a 10-28 or an EDP (emotionally disturbed person) we call them that because we’re not allowed to call them psycho nutcases. This particular one was in a halfway house and hadn’t checked in with home, or anyone else for several days, so we were asked to do a welfare check on him, as he was a known suicide risk.  When we went to his room, he wasn’t there, when we were coming back down to get the fire department to break in, he came into the building, saw us, and the fight was on.  He wanted my gun.  At that point I wasn’t going to worry about WHY he wanted it, I just wanted to make sure he didn’t get it.  Eventually while rolling around, my partner opened up the party can of pepper spray and doused him liberally, which means I got it too.  Wasn’t the first time, or the last time.  It burns, it sucks, it’s unpleasant as hell.  It doesn’t cause strokes.  So put down the bloody shirt and back away.

Now, let’s compare and contrast three cases of use of deadly force, or not so deadly force.  I visited one of these last week. Kim Potter, who was an FTO, drew the wrong weapon. Meaning to draw the Taser on her hip, instead drew the pistol, and shot a fleeing suspect.  She’s now facing a charge of Manslaughter, and no longer a cop.  Deserved? Well, maybe.  I talked last week about how in times of high stress, we operate off muscle memory, and automatic training.  Let me tell you a little tale about that.  Back in the 80s and early 90s Police officers on the range, were not trained to clear their own jammed weapons on the firing line.  Neither were Sailors, and for the same reason. It was “not safe!”  You need an armorer to do that for you!  Well, then came the day in NYC that a senior detective, involved in a shoot out with a bad guy, suffered a “stovepipe” that’s a type of jam where the shell doesn’t fully extract, and the spent round blocks the weapon halfway open.  This officer had been in this shoot-out for a couple of minutes with the bad guy, I’m sure he was stressed as fuck.

We must assume so because we can’t ask him.  He’s dead.  See when he suffered that failure to feed, his training kicked in, and he did what the range had trained him to do.  This 20-year detective raised his nonfiring hand in the air, and stood up, indicating he had a jammed weapon!  That is what they had trained him to do!  And the bad guy gave him a third eye.

You would think it’s inconceivable that a well-trained officer would do something that stupid, right?  But see, the thing is he WASN’T well trained, in fact, his training sucked!  It was after we learned that lesson, paid in blood, somewhere just before Desert Storm (I remember, because we had our range training change suddenly, and this was given as the reason why) that we started learning how to fix the jam in our weapons, started doing “Tap rack bang” drills, and on the tactical range if we had a failure that we couldn’t fix (happened, my extractor broke on my sidearm, and I could literally see the target through the hole where it had fallen out) we were to stay behind cover like our lives depended on it, and place our weapon over our head. This caused the Marine running the range to come out, and say:

“What’s wrong with you, sailor?”

“My Pistol is broken, Gunny”

“gunny, look beside the hammer to port.”

“SHIT, sailor, your pistol is broken!”

“NO SHIT, Gunny!”  (I was senior enough to get away with that)

“Go get another pistol and restart the range.”

“Aye-aye, gunny.”  No for the record, in what is now going on 45 years of handling various versions of the 1911A1 45 ACP service weapon and its various modifications, that is the ONLY complete failure, not repairable by swapping out a magazine, that I have ever experienced, and it made the weapon basically a single shot, that could be fired a little slower than a single action old west revolver.  I consider that a damn good track record.

OK, so back on track… Potter is facing trial and probable prison.  I say probable because in light of the other Minnesota case I’m going to mention, one former officer Chauvin, the possibility that Potter walks free is damn slim.  Between the stupid shit that Maxine Waters pulled, saying that “if they don’t bring back a guilty, guilty, guilty verdict, you gotta get more confrontational!”  (In light of the fact that they already burned down a couple of city blocks of the town, I hate to imagine what “more confrontational” looks like.) and the fact that the Chauvin Jury was Doxed by the Star Tribune, listing the professions, marital status, race, age, and political opinions of each of the jurors (enough data to track down who was on the jury by name and address) The likelihood that Chauvin wasn’t convicted was tiny. The likelihood that after that, Potter doesn’t get convicted is tinier still.  I’m willing to bet that Chauvin wins on appeal, because this jury tampering should cause a miss trial, and I don’t think you can seat a jury at this point that would give the case a fair hearing!

Note that this does not mean I think Chauvin is innocent.  I don’t.  I don’t think I can reach to murder in the second, but manslaughter? Oh yeah, I can find that pretty easily.

OK, that’s what happens when a cop kills a black man right now. (and the cop involved in that shooting of the 13yo in Chi, yeah, he’s fucked.)

But the cop I would like to compare and contrast this with? Well, I can’t give you his name, because the DC police department won’t release the name of the cop that shot and killed Ashli Babbitt.  See the DA doesn’t have any interest in charging anyone on this shooting, in spite of the fact that she was unarmed, she was physically less than three feet from a couple of armed officers that didn’t decide she was enough of a threat to draw on, much less shoot, or the fact that the officer didn’t say a fucking word to attempt to apprehend Ashli, this plainclothes officer, without identifying himself, or giving any commands, drew his weapon and centerpunched her chest.

But of course, there isn’t any Air Force, or other service vets, rioting, demanding justice for her. There aren’t people of her ethnicity (see, she was white) protesting, throwing firebombs, and trying to burn down the city.

What sort of message is this?  Do we have to riot to see justice?  And by rioting, is our case automatically valid?  If Ted Cruz were to speak to an American Legion convention and demand that “if they don’t take the guy that shot our sister before a court of law, find him guilty, and imprison him, you gotta go get in their faces, you gotta go to their homes, you gotta give them no peace!” would that suddenly make this a case worth trying?

Justice by media and by mob is no justice.  If Potter should be tried, so too should the nameless fuck that shot Babbitt.  If that was “justified” then so too was Potter’s action.  I have a dream.  I dream that one day we really will judge people by the content of their character, and not the color of their skin.  Martin, your goals got sold down the river.