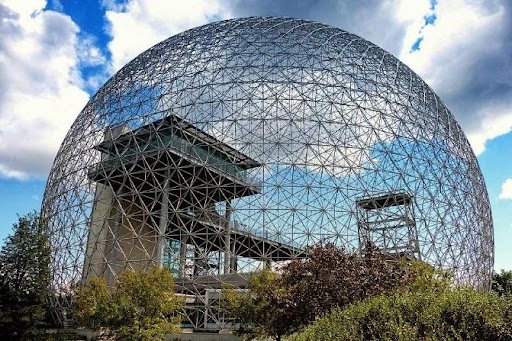 Authors and other hucksters often talk about or write about when we have one world government, and we “ain’t-a-gonna-study-war-no-more.”  I have done it myself in the novel series I’ve started, which takes place in the 2150s.  Of course, I have other antagonists to provide that needed competition. (Aliens!)

Here’s the thing. Back in 1987, a bunch of ideologically sound (means liberal as fuck) individuals, decided to design and build a “perfect world” where they could experiment on how a closed system works, and how we could develop a more ecologically sound way of living.  Their plan was to design all the ecosystems to be self-supporting and self-renewing, so as to show the world how we could better live alongside nature.  Well, it didn’t work nearly the way they thought it would.

Those ideologically sound kumbha types soon found themselves at each other’s throats, nearly literally, although that’s not the biggest thing that they learned.

The biggest takeaway from the study was something that Robert Heinlein talked of back in the 1940s, if only these idiots would have listened.  It has to do with the trees.  See, they fell over.

They discovered something called “etiolation” that normally happens in plants grown in the dark (like “white asparagus”) where the plant is incredibly weak, also happens to trees that don’t have wind trying to push them over.  And so, the trees, never having had the benefit of an antagonist in the form of wind, collapsed and died.

What has that got to do with anything, you ask? (Yeah, you, the guy in the back with his soy no fat, Fairtrade late` and the bitch-bun.)

Well, Sparky, let me break it down for you. See the NYT, is trotting the old “we need one world government” out again. This time in response to the bad cold that kills .6% Or 618 per 100,000 people in the worst affected nation (Peru), and .29% or 237 per 100,000 in the US.  Yeah, that’s the death rate for COVID, according to Johns Hopkins https://coronavirus.jhu.edu/data/mortality (bearing always in mind that according to these statistics if you had COVID and died, you’re counted as a COVID death.  {I mean, if you get SHOT and you have COVID…yup, you’re a COVID casualty.}) And then you have this wonderful new article from the Lancet (England’s equivalent to the NewEngland Journal of Medicine) https://www.thelancet.com/journals/lanepe/article/PIIS2666-7762(21)00258-1/fulltext?s=08#%20 Which seems to indicate that the jab isn’t doing a DAMN thing to fight the bug, keep you from passing it on, or even keeping you from dying if you catch it.

Look, I get it.  People have died.

Guess what, 316.6 people per 100,000 die of cancer in the US per YEAR, so the mortality for the time period in question (2 years) is double that. Cancer is more than twice as likely to kill you as COVID. Heart disease kills 23% of the people that die each year. (NOTE here, you are 194 times more likely to die of heart disease than COVID.)  Here’s the fun part, for the years 2016-2018 you had a .2% percent chance of dying of influenza or pneumonia…  Go back up and look at what COVID killed, I’ll wait. Oh, and diabetes? Yeah, that’s more deadly than influenza and pneumonia.  We don’t run around like chickens with our heads cut off over the normal flu, even though it’s nearly as deadly as this thing, and diabetes, which is MORE deadly, is a laugh track on late night TV.  If we treated diabetes the way we treat COVID, sugar would be illegal, and you would have to have monthly blood tests to see if you had it.

Well, that “one world government” that the NYT and people like Lenin (John or Vladimir, take your pick) are such proponents of, might, I say again might, do a better job of creating a “unified response” to COVID, but AT WHAT COST?  To give a world government the sort of power it would need to create a unified response, it would have to be a totalitarian government.  IE China or Russia for the world.

“But it’s worth it if we save one child” whines soy-boy in the back.  And how many will you kill to save that one child?  Ask the Uighurs how China is working out for them.  Being a minority in a totalitarian regime is NEVER healthy.  Take for example South Africa.  They have turned down shipments of the vaccine, because they can’t get people to take it!  Africa in general has about a 10% rate for at least one dose. https://www.reuters.com/world/africa/exclusive-south-africa-delays-covid-vaccine-deliveries-inoculations-slow-2021-11-24/?campaign_id=9&emc=edit_nn_20211201&instance_id=46659&nl=the-morning&regi_id=28200476&segment_id=75748&te=1&user_id=10d59faf3e1d1200e0ddca9ff23febad

Now imagine the “one world government” dealing with that…  Suddenly this doesn’t sound like such a good idea, does it?  The fun part of that is watching the NYT tap dancing and fan dancing over the fact that American Republicans in general don’t trust the government, and neither do the Africans, but it’s TOTALLY not the same thing…

Then there’s the little detail about the trees… Remember them? Without a force to challenge them, they don’t do well.  People are the same way, and the force is other nations.  It doesn’t have to be a shooting war, but nations are at their best, when challenged, and contrary wise, when they are not challenged, they fall apart and rot from within. Go check your history.  I recommend studying the end of the Han Dynasty, the fall of Roman Empire, the fall of Egypt’s empires, the collapse of the Abbasid Empire, the fall of Byzantium, and others left as an exercise for the student.

Until we have an extra planetary enemy, we NEED to have multiple nation states.  Monocultures don’t fare well in the long run… Ask the Irish.

In other news, the Military review is out… and a joke.  We decided that “everything is fine.”  While we have troops in places where they aren’t allowed to do anything, and we don’t have troops where the attacks are likely.  But I suspect that the perfumed princes and princesses of the Pentagon would rather risk defeat in war, than admit that, oh say for instance, the Central Africa Command is a waste of troops.  See if we did away with that, we would lose a few general billets, and well, we can’t have that now, can we?

Afghanistan, (remember them?) is begging us for money, because “humanitarian crisis” and I give them 6 to 9 months before they beg us for help to control the terrorists.  Yes, this is the government made up of the Taliban that were terrorists against the US forces aiding the preceding government.

Well, they’re finding out that running the joint isn’t as easy as blowing it up.  (Let me let you in on a little secret Abdul, it never is.)  See their “friends” ISIS are back and blowing up shit to overthrow the Taliban.  Karma is a bitch.  If we had the brains the Gods gave a turtle, we would tell them to pound sand, starve in the dark.  Hey, their erstwhile buddies China aren’t even helping them out, why do we want to spend one more red-cent on that shithole?

Ghislaine Maxwell’s trial has started: (if you don’t remember, that was Epstein’s girlfriend and co-conspirator.) Fun fact, Twitter’s CEO, Walmart’s CFO, and CNBC’s CFO resigned; the CEO of Microsoft sold half of his stock portfolio… but I’m sure that’s just coincidence.  And there’s a rumor I have not been able to substantiate that a couple of the jurors came up missing this morning so they had to stop the trial…

Jussie Smollett’s trial also begins today, you may remember him, he’s the fifth-rate actor who staged his own hate crime, to try to discredit Trump??? I hope that we see the same level of justice against this worthless fuck that we saw with the Kyle trial.

The lessons learned have come out about the Arbery trial, and even the NYT is forced to admit that winning the trial involved NOT making a big deal about race.  Furthering the message, his (Arbery’s) dad came out publicly saying “all lives matter!”  I’ll say it again, when we quit making everything about race, when we don’t make race matter, then it won’t matter.  As long as one group is trying to make a big deal of being a group, we ain’t there.

Finally, we have “Let them drive Teslas” Buttigieg, or Buttplug, or whatever his name is. The sad sack of shit that is our Transportation Secretary, who believes that the cure to excessive gas prices, is that “rural Americans who have the most distances to drive, who burn the most gas” and “poor city dwellers” where gas prices are usually higher “would gain the most by having that [electric] vehicle.” He insisted, “These are the very residents who have not always been connected to electric vehicles that are viewed as a kind of luxury item.”

News flash Pete, maybe you need to get your head out of your partners ass, and that ivory tower, and figure out that if you can’t afford GAS, you can’t afford a fucking $50,000 electric vehicle.

Oh and them ol’ boys that are “rural Americans” they have pickup trucks because they NEED them to haul shit.  Your Tesla doesn’t do that.  Further, according to AAA, an Electric Vehicle Costs on average $600 more per year to operate than a gas job, even considering the savings in fuel and maintenance. https://www.aaa.com/autorepair/articles/true-cost-of-ev Then there’s the little detail of “electric vehicles batteries are not as effective in very cold weather” and the heaters on them are about on par with an old VW bug’s heater, which is to say as useful as tits on a boar hog.  This makes them suboptimal for folks that have to drive a long way, like the aforementioned rural American.

OK, I’ve put enough time into this tonight, keep yourselves safe and watch your six.