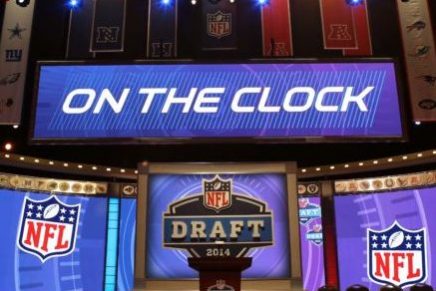 1. Cleveland – Myles Garrett DE Texas AM…Cleveland can take the best available player and still address their quarterback need later in the first round

2.  San Francisco – Mitchell Trubisky QB North Carolina…The 49ers have a lot of work to do and 31 year old Brian Hoyer is not leading this team into the future

3.  Chicago – Solomon Thomas DE Stanford…The Bears could select a quarterback here but select the best available lineman on their board

4.  Jacksonville – Leonard Fournette RB LSU…After signing Barry Church and A.J. Bouye to solidify the secondary, the Jags will add an electrifying running back

6.  NY Jets – Deshaun Watson QB Clemson…Geno Smith is gone and the franchise needs a fresh face for fans to get behind

8.  Carolina – Jonathan Allen DT Alabama…The Panthers need a running back but Allen here is a much better value than taking Cook or McCaffrey and is the best player available

9.  Cincinnati – Derek Barnett DE Tennessee …The Bengals were slightly below average on defense and make a somewhat surprising pick to strengthen their defensive line

10.  Buffalo – OJ Howard TE Alabama…Tyrod Taylor needs a weapon across the middle of the field to open up Sammy Watkins

11.  New Orleans – Malik Hooker S Ohio State…A defensive back must be added after finishing as one of the worst teams in passing yards allowed per game for two straight seasons

13.  Arizona – Mike Williams WR Clemson…With Larry Fitzgerald on the back end of his career and Michael Floyd gone, the Cardinals take the top receiver

14.  Philadelphia – Gareon Conley CB Ohio State…The Eagles do not have a lock down corner and need a star to lead their defensive backfield

16.  Baltimore – Corey Davis WR Western Michigan…Tied for last in yards per reception, the Ravens need to add an offensive playmaker to a group that is now without Steve Smith Sr.

17.  Washington – Rueben Foster LB Alabama…The Skins have many needs on defense and take the best player available although Foster’s diluted drug test at the combine may raise concerns

18.  Tennessee – John Ross WR Washington…Finishing 25th in passing yards, adding the fastest receiver in the draft along with Marshon Lattimore would make the Titans day 1 winners

19.  Tampa Bay – Dalvin Cook RB Florida State…The Bucs have Doug Martin serving a suspension, Charles Sims coming off of injury, and a third down back in Jacquiz Rodgers

21.  Detroit – Charles Harris DE Missouri…One fewer sack away from being last in the league, the Lions need to put more pressure on their opposition

24.  Oakland – Marlon Humphrey CB Alabama…24th in passing yards allowed per game and 24th overall defensively, the Raiders need additions to that side of the ball with the 24th pick

25.  Houston – Patrick Mahomes QB Texas Tech…Mahomes gets to stay in Texas after Romo’s retirement left the Texans without an answer at quarterback

27.  Kansas City – Takkarist McKinley OLB UCLA…Derrick Johnson is 34 and the Chiefs need new playmakers at linebacker for their defense

28.  Dallas – Kevin King CB Washington…In free agency, the Cowboys lost a lot in a secondary that was torched by Green Bay in the playoffs

29.  Green Bay – T.J. Watt LB Wisconsin…The Packers were horrific in the secondary, but some of that can be blamed on injury, while the loss of Datone Jones and Julius Peppers must also be addressed

31.  Atlanta – Adoree Jackson CB USC…The Falcons brought in Dontari Poe to help pressure the quarterback up front but now need to add a playmaker to one of the weakest pass defenses in the league

32.  New Orleans -Tre’Davious White CB LSU…After taking a safety earlier in the draft, the Saints will continue to strengthen the worst secondary in the league