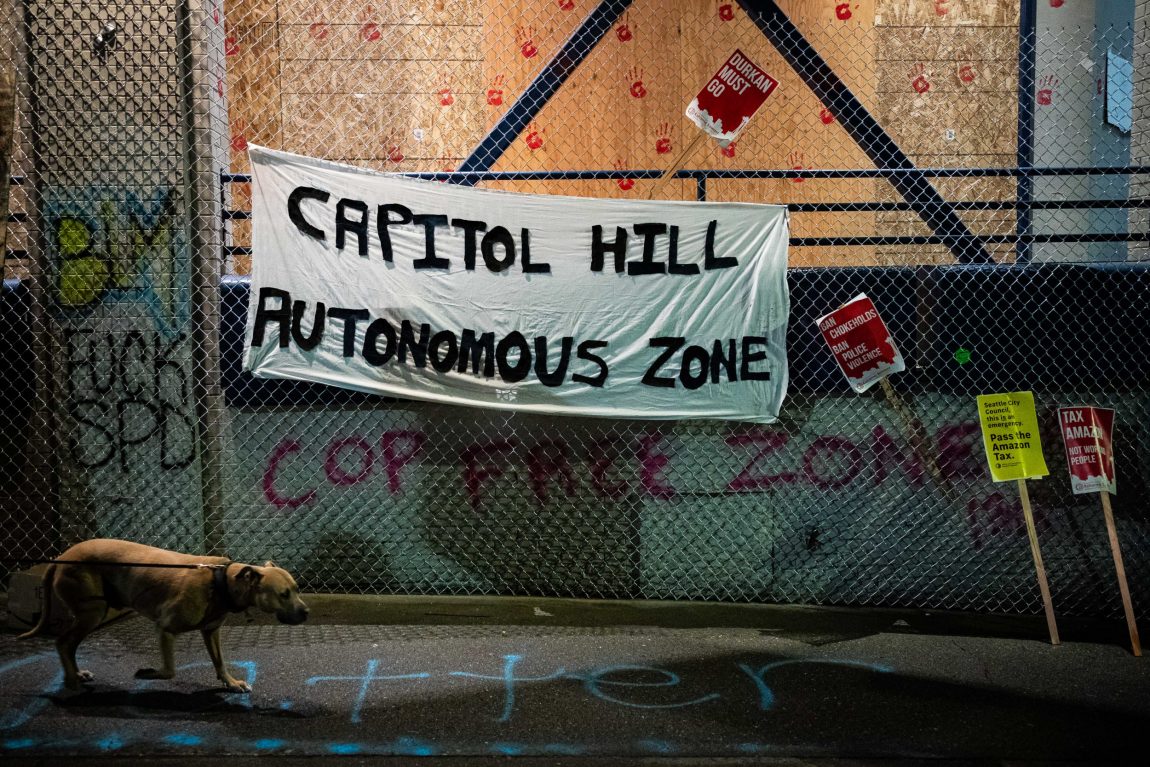 Well, across the water, the mayor, one Jenny Durkan, has figured out finally, what we all knew from the get-go.  Specifically, that the CHAZ, sorry CHOP, sorry CHOAD… is just not a good idea.  It only took one dead kid, two shot up kids, and at least one reported rape, as well as all the property damage, and general destruction.

But now she’s in a tough bind.  The late great Bill Mauldin, a guy I consider one of the finest political cartoonists in history drew up a cartoon one time that is pertinent to this discussion.  Two guillotines were side by side. In one, rests Khrushchev, in the other, Eisenhower. Each holds the rope to the other one’s blade.  Captioned “the trick is letting go, without turning loose.”   Poor Jenny is in that boat.

She threw the cops to the mob in hopes of, as Mel Brooks put it “Keeping her phony-baloney job”.  Now she’s got dead kids, a pissed off law enforcement community, a number of businesses that are bailing out of the state entirely or Seattle in particular, and she’s out of people to hide behind.  She claims that she wants to reclaim the protest zone without using the police… Yeah, right, pull the other one, Jenny, it’s got bells on it.

This whole thing was started over race… It’s mutated into something else, but that was the original thing.  What it is mutated into, is a method of trying to destroy the underpinnings of civilization.  The movement has been taken over by a vast number of other and often competing interests, most of which boil down to “Burn it to the ground.”  So now she’s got to find a way to take back the area without looking like she’s resorting to the very thing that she was throwing figurative rocks at a few days ago.

The problem Jenny is that when you lie down with dogs, you get up with fleas.  That group wasn’t “Black Lives Matter”, that group was using them as a cover.  I think you’re screwed, and I’m just going to sit back and eat popcorn, while I watch you flounder.

While we’re talking about race and race relations, let me get something off my chest:

Someone’s race only matters because we make it matter. Now I realize I’m a white guy and thus am supposed to “check my privilege” and all that shit…

I get to speak too.

Here’s the thing: Growing up, I was pretty much oblivious to color, Oh I had a couple of racist relatives, but filed that in my head under “this person is unable to change, and is broken.” For me, race didn’t matter, because it just didn’t matter. Behavior was all that mattered.

Throughout my naval and law enforcement careers, it didn’t matter unless my nose was rubbed in it. (one such example was the Chief Of the Boat, on one submarine, who gave all the career-enhancing collaterals to black crew members. Upon being called on it, he said: “I can’t be racist, I’m a black man, anything I do for my brothers is just getting some of ours back from you white cock suckers.” This is a direct quote from a USN E-9)

Race only matters because we MAKE it matter. I have a daughter by choice, a dear friend of my daughters, who we have acted “in loco parentis” for, many times. She calls me “pops.”  She happens to be black… who cares.

Folks, I realize that the intent, at least of the well-meaning members of the various movements, is to make things right, make our system truly colorblind. But there are folks in this movement that are doing the opposite. Folks like that COB I mentioned up above. They don’t want Fair, they want their turn on top, and they want Vengeance.

Others just want to tear the system down, some out of ignorance, some from malice, some are what Stalin called “useful idiots” who see themselves as working for a supreme soviet, where they will be in charge, naively missing the fact that like so many revolutions before, they will be the first ones up against the wall, come the “glorious revolution”.

Yes, I understand that there are, and have been black men who have the experience that I described, wondering if that guy in the badge is going to shoot them or kick their ass for the sin of being black…

Yes, there are bad cops. I’ve been there. When you get pulled over in uniform, and the first words out of the KCSO’s lips are “What’s the matter Squid” in the most hateful tone of voice possible, you know it’s going to be a bad day… you keep your hands in clear view, you get permission to move, and you note everything for the discussion with the judge. The day of court was fun, I showed up in dress blues, and I have a fair share of fruit salad (5 rows) and my left sleeve was all gold. Needless to say, I got out of the crap, and the deputy lost hide.

Here’s the point. Wanting vengeance perpetuates the cycle. Wanting your turn on top isn’t going to make anything better. I don’t want anyone on top, I want a true level field, where competence and character are what matters. If you want the fact that “he was black” to matter any more than “he was Austrian” or “She was a Protestant” you’re helping perpetuate the problem.

When no job application includes a checkmark for race, when no survey asks “what’s your race”, when American is how you describe yourself when asked, or even better: “Human”, then, we will have achieved the goals of our constitution, that target that we aimed at so long ago.

Oh, we will always have points of difference, that’s embedded in the hardware of the human mind. We are a tribal species, and until we are willing and able to play games with the hardware of the brain, it’s going to be unavoidable. But let it be “country mouse” v “city mouse” or “Seahawks” v “Rams” fans… Hell, let it be “Army” v “Navy” and we both sneer at the Airforce.

At least that’s what it looks like from my desk.