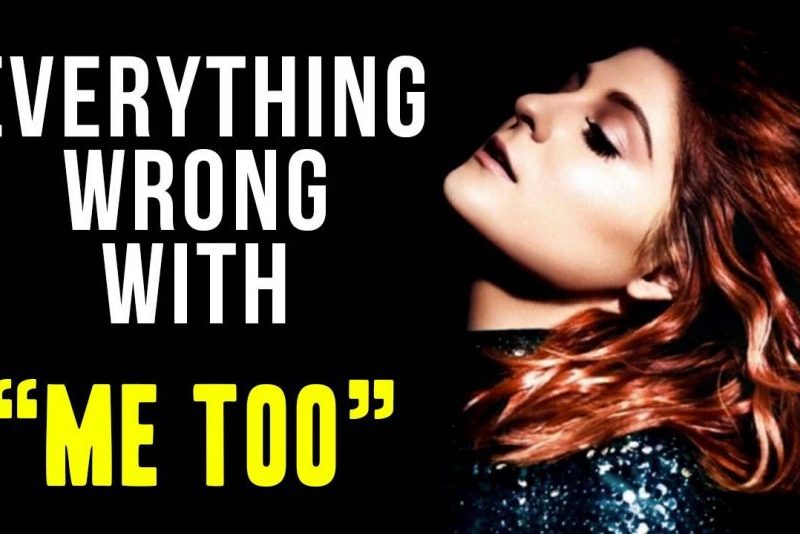 Good morning and welcome back to the scuttlebutt, pull out a bucket and cop a squat.

We’ve all by now been inundated by all the “Me Too” posts. Well, I’m about to call lightning down on myself probably, but they’re a crock.

Here’s why I don’t support them.

We started with a scumbag, one of many in Hollywood, where this has been going on for about a hundred years at this point.  He used force for decades, to have sex with unwilling participants.  He raped.  Not the first, not the only current one, won’t be the last. He has been given cover for decades by the press, and by the political party in power in his state, because of his political views. He gave money and time, press and movies, covering all the right causes, to all the right people, and all the right places. He was the darling of the Democratic party, and hung out with the biggest movers and shakers.  Hell, he was the biggest mover and shaker, and I’m not just talking about that gut of his. Until suddenly, someone had the courage to call him on it.

Suddenly everyone else that he’s made a big star, must fish, or cut bait.  They call him on it too.  (It’s interesting to note, they’re not calling anyone else, except I believe Affleck, and we ALL know that there are more out there… but they still have political cover) People who signed the petition defending Polanski for drugging and raping a 13-YEAR-OLD ANNALY suddenly come out saying “me too”. Re read that sentence.  These hypocrites defended a man who drugged a 13-year-old girl, had anal sex with her while she was stoned, and they defended that, then had the audacity to say, “but this guy groped me, so I’m traumatized.”

But here’s the insidious part. Almost immediately this “#metoo thing starts lumping together rape, with harassment, under one big “everyone is a victim” (except men, men who post this get shouted down, unless they’re gay) umbrella. That equates something somewhat disgusting, that has happened to just about everyone over the age of 25 on the planet, with a horrific thing that happens to 17.6% of women (rape or attempted rape) and 3% of men in this country (source Https://www.rainn.org/statistics/victims-sexual-violence)

That’s like saying having someone pointing their finger at you and making a gun sound is the same as being killed. (If you think they’re identical stop reading now, for your blood pressure’s sake. Seriously).  You’re lumping together three very different things, and calling them the same thing.

If force is used, (includes implied force, like “if you want to work in this field anymore, you’ll blow me) and sexual contact happens, that’s rape.  It’s not sexual harassment, it’s not abuse, it’s rape.  That may or may NOT include the drunk who won’t take no for an answer.  If no sex, (penetration however so slight being enough to complete the act, if I remember the “legal” right) it’s rape.  If he or she uses force and the victim gets away without being raped, it’s attempted rape.  If the perp harasses and harangues and won’t take no for an answer then falls asleep at the bar before going to force, it’s not rape, it’s not attempted rape, it’s harassment.

The boss leering and hugging you, the date begging and cajoling, those are also sort of two different things. one is sexual harassment, and a crime in a work place or between workers.  The other is also sexual harassment of a sort, but it’s not a crime, and why are you still with them?

Then there’s “buyer’s remorse” where you were both a bit inebriated, one or the other started it, the other went along willingly or at least didn’t say no, or indicate no, and was conscious to do so.  Then the next morning did a “Oh my gods what have I done?”

That’s not rape, that’s not harassment, that’s bad judgement.  Not a crime, and screaming rape about it IS a crime, a crime that has also ruined lives. Like the lives of men kicked out of college, some of them jailed for rape, only to have the “victim” later recant and admit that it was not only not rape, she was an enthusiastic participant.   It’s enough to make the “love doll” industry millions.  Cherry 2000 here we come.

The next problem I have with it: It assumes that you will “somehow” “reach” the sorts of people that rape. The only way to do that is with copper jacketed lead at 980FPS. People that rape don’t give a shit if you, or ten billion of you, got raped, except that it might give them sexual pleasure to contemplate.

Further, it ennobles victimhood, and encourages one ups of “who can be the biggest victim”.  Fuck that.

I’ve been kilt checked lots of times, often by some woman I don’t know from Adam’s off ox. (if you don’t know what kilt checked means, it’s when a woman runs her hand up under your kilt to see if you’re wearing it correctly, IE without anything under it.  Normally its up the back of the leg, and stops when she gets to your butt cheek.  One broad of ill repute at an SCA event reached up the front and grabbed my dick.  She ‘bout got her fucking hand broke)  If they’re friendly about it, and nice people, I usually say something to the effect of “you’re going to have to get my wife’s permission to play with that” which is usually enough for them to get the clue. If they are high on the “EWWW” factor, they get their hands hurt.  A lot.

I can put a significant amount of pressure on a squeeze and if that doesn’t get the reaction I want, then we go a little further into takedown moves…

It normalizes and desensitizes the issue. If it’s happened to everyone, (and the sort of stuff that is being listed as Harassment by some of the Me-Too crowd has happened to about everyone, including old overweight broken down guys like me) then it’s no big thing, and that way lies problems. You get into the “everything you do is racist or covering for racism” area, and now racist doesn’t mean anything anymore. Let’s not let rapist get to the same place, shall we?

It also drives the narrative that I saw Tuesday in an Op-ed piece by the NYT.  Something about how “republicans, you don’t get to say “me-too” because you’re worse”.  Really? Someone saying that women are attracted to money and power, and will come on to you because of that, is worse than someone having sex with unwilling women on the “you’ll never work in this town again” plan?  See, it’s this sort of shit that happens when you equate things that aren’t even in the same ballpark.

Now I’ve had discussions with well-meaning and intelligent people that say that: “women and more than a few men have been in situations where 1) we felt unable to stop a person who had power over us 2) we did not want what ended up happening even if we agreed with the start of it 3) we agreed under duress because we were scared, or young, or confused, or in an altered state.”

They go on to say: “we can do something about the most egregious. If a person has power over others, we need to think about where the new lines need to be. Yeah, I have been harassed, and I have been scared, I have had sex I didn’t want. It would be good if my granddaughter doesn’t live in a world where that is as normal as it is now.”


Sorry, but I don’t think that world exists this side of the grave. People are people. Murder, robbery, assault, rape. all these things have existed since time immemorial, and I see absolutely no chance for them to suddenly, magically, cease to exist, especially because someone says: “me too” or sends “hope and prayers”.

I too have Granddaughters, and the best chance for them to live in a world where this is not more common than it is now, is for:

1) Us to keep the rights and privileges that we have now as American Citizens, including but not limited to the right to defend yourself by bearing arms. (because Yes, I am compensating for something, I’m compensating for the fact that I’m not as big as three 6-foot-tall gang members that might want to take everything I have and kill me)

2) To encourage everyone to get past white, black, male, female, gay, straight etc… and accept that we are all people. Not black people, white people, victim people, potential assailant people etc… This doesn’t help do that, in fact, since most of the places involved are removing any male that plays the card, it does the opposite.

3) Grow a fucking spine. Learn to say no, and use whatever force is required to make NO stick.  Ladies, and gentlemen, that includes 911 and 1911A1.  (for those of you not aware, that was the service pistol for almost all the 20th century)

Oh, and forget the “I was confused or in an altered state” shit.  If you sat down with a crew of guys from the hood, or the barrio, or wherever, and proceeded to get stoned, or drunk, guess what, you made a choice.  Being a responsible adult means knowing when to stop because you don’t make smart decisions when under the influence.

NOTE I am not talking about “I got passed out and they raped my unconscious ass”, as consent.  It’s not, it’s rape.  (should you have shown enough brains not to get passed out in company that you don’t know? Damn bettcha.  But that doesn’t excuse them! It makes you a moron, and them a criminal.) I am talking about the old joke of “what’s the mating call of the American blond?” “Tee Hee, I’m Tipsy”.  If you know that tequila acts on you as a panty dissolver, or cocaine makes you copulate, and you choose to do it, then wake up the next morning thinking “Gods who have I done?” THAT’S ON YOU.

Further, and lastly, I’ve seen massive numbers of: “white men need to stop posting ‘me too’ because it is only a thing for women” If the issue is sexual assault and harassment awareness, you would think that more people stating that they had also been there, would be better, right??? Oh, but it isn’t about that for the folks that are posting this sort of shit.  There is an old 60s era communist saying that “the issue isn’t the issue; the revolution is the issue”.  And so, it continues.  It’s not about the thing of the day, it’s about another way to stir up hate and discontent.

You folks take care.  Make sure he or she means it, before you knock boots, and be selective, the doc doesn’t want to have to give you the chunky peanut butter shot, he doesn’t enjoy it.  Have FUN, but have responsible fun, damn it.