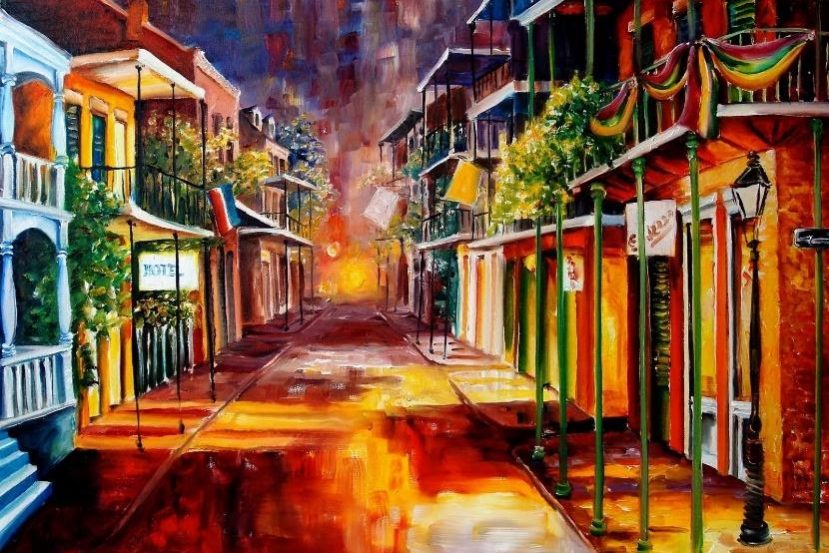 Here, have a Hurricane, and pull up a chair, let’s talk. Now normally, I would do a year in review or something, but frankly, this has been a year I don’t want to review, relive or even remember.  Instead, I’m going to just talk about last week.

OK, so I have a new favorite city, for as long as it lasts… Allow me to explain. As I mentioned last week, my family met in New Orleans for Christmas this year.  I had never been there, nor had any of my family except my mother, who had been there before I was born (so over 58 years ago) and my wife, who went to college there.  So, this is going to be part city and restaurant review, part editorial, and will wander a little bit.  I know, big surprise, huh?

New Orleans has a character and class all of its own, a character that has survived, with changes for 300 years.  I hope it makes it for 300 more, but I fear it probably will not.  Oh, the city, as a place with lots of buildings, and lots of people living and working will still be there, as long as we last as a nation and beyond… Cities exist because of trade routes, and lines of communication. In North America there is no bigger line of communication than the Mississippi river, so there will always be some sort of jumping off place, trade route, transshipping port, etc. where NOLA is.  But there are two types of cities: City- generic one each, and cities with character and identity.  The GREAT cities, the memorable ones come under that second heading.

Now, before I go any further, let me make clear that on the whole, I hate cities.  Cities are the very definition of that quote from Men in Black: “A *person* is smart, People are dumb, panicky, dangerous animals, and you know it.”  Any town bigger than about 20K starts to get into that “people” category for me.  The bigger the city, the more it gets that way, almost invariably. I think the secret to keeping that from happening is strong neighborhood identity, and keeping the neighborhoods small. (Side note, I think that what happened to New York is a combination of the collapse of neighborhood identity, and the neighborhoods getting too big.  Queens has nearly the population of Chicago for Gods’ sake @ 2.28 million people.)

NOLA has managed, so far, to keep the neighborhood identity, but it seems to be under attack.  We spent most of our time in the Marigny, “the Quarter” (the French Quarter), and the Garden District.  The Marigny still has the “little town” feel, we stopped to smell some guys roses, and wound up in a fifteen-minute conversation when the guy pulled up and started talking to us. In short, we were all still *persons*.  The neighborhoods are still integrated not by government order, but by recognition that we’re all just folks.  I felt in less danger walking through large crowds of black “military age males” in NOLA than I do in Seattle or Portland… (Hell there’s some places in Seattle and Portland that I just don’t go, it’s flat out not safe for a straight white guy to be there anymore.)  If you don’t have the awareness to recognize when the crowd around you is hostile vs when the crowd around you couldn’t care less what color or sexual orientation you are, well either stay home, or travel only with someone who does.  I have that awareness from years as a sailor in foreign ports, sometimes as Shore Patrol, and years as a cop.  I’ll tell you that I only felt threatened one time in NOLA (more on that later).

These areas are “old New Orleans” and boy, I am here to tell you, they’re in trouble. One building in three in the Quarter is boarded up with closed, or “for sale” signs. Places in both the Marigny and the Quarter that have been open 24/7 since the Second World War are now boarded up. Literally hundreds of hurricanes couldn’t kill these stores, clubs and bars, the biggest war the world has ever seen couldn’t do it, Katrina couldn’t do it.  The city and state governments however, in an overreaction to COVID are managing it though. If they don’t let up soon, there won’t be a Quarter to save.  The city will still be there, but like NYC, or San Diego, or recently Seattle, it will no longer be the unique and great city that has been there for longer than the nation.  It will become just another big city, another stack of concrete buildings, with faceless people who live in the city but don’t know or care to know their neighbors… another rat warren.  If I had the money, I would buy one of the places that’s gone under, and re-open it as a BBQ joint with good booze and rockabilly, just to do my part to save the Quarter.

For this reason alone, you should go there, and go now.  Saving this city is worth it.  It has character worth saving, and the world would be a lesser place without it.

The place has, so far, avoided the “big box grocery stores” that exist everywhere else, and instead you still have neighborhood markets, which I am a huge fan of.  It still has little burger shops (being NOLA of course all the burger shops also sell booze) one of the best burgers I’ve had in the last year was in a little joint called The Avenue Pub on St. Charles.  We were walking the Quarter on Christmas eve, and it was starting to get hungry out, so we stopped at Arnaud’s. Little thing here, we were made to feel quite welcome even though we were in “walking about clothes” (not sloppy by any means, but certainly not suit and tie), and since we didn’t have reservations, they seated us in the bar, apparently going here for Christmas eve dinner is very much a thing, and formal wear is the uniform of the day!  The food was fantastic, the service was second to none.  Go there, bring good clothes.

On the other hand, we went to Christmas dinner at Broussard’s, because my wife had heard wonderful things about it the whole time she was living in NOLA and couldn’t afford to go there.   Well, I’m here to tell you, those folks were living off their reputation.  The food was good, but not as great as the prices, we were dressed to the 9s and felt out of place, because everyone else wasn’t, there was a drunk good-ol-boy, apparently taken there by his family, who was loud, obnoxious, and embarrassing not only to his family, (who kept looking over to us with mortified faces) but to the whole damn establishment. The service was frankly bad.  First note, when your waiter doesn’t know what a Sommelier is, at a 100 dollar a place dinner spot, that is a major warning sign… The food was late, and I mean WAY late, cold, and generally uninspired.  This was the one real disappointment of the trip. Seriously, don’t go there, they’re dead, and just don’t know it.

On our way into town, our Uber Driver recommended a joint that another friend had recommended too, Couchon a couple blocks from the WWII museum, so we hit that after the museum.  Go. Don’t worry about dress, this is a trestle table and benches kind of place, but the food, ah the food my friends!  Great bar too!  Any place that has just about a full page of bourbons has my attention. A little pricey, but in general, restaurants were a bit high there.  I’m sure they have had to raise their prices to survive.

We went to The New Orleans Creole Cookery twice, the first night we were in NOLA we went by ourselves, and then the last night we were there we took the whole family… This was a mixed bag.  First night the food and service was GREAT, and we didn’t have reservations but that wasn’t a problem.  The second time we were there, we HAD reservations, (well, there were seven of us, so…) and we got to experience the one time in NOLA that I thought was going to go south in a big way.  One of the cooks apparently had a beef with another staff member, and it about went to knives in the front reception area, with my grandchildren behind my daughter’s man (former Marine Recon) my wife, and I.  Seriously, this went right to the edge of drawing down on a BIG guy who had decided that he had “had enough of you fuckers shit!” at the Maître d` s stand!  That should have been a warning, but we stuck around anyway.  Service sucked, some of the food was quite good, some of it wasn’t, the wife’s fillets came out cold, daughters low country boil was so over cooked as to be inedible… all in all the antithesis of what our first experience was.  By the end of that we just wanted to go home, so I missed my last night on Bourbon street.

The two pleasant shocks of the trip, first: Reginelli’s Pizzeria in NOLA has a Gumbo Pizza.  And a Baked Brie calzone.  Look, I know a gumbo pizza sounds weird.  Try it anyway, this gut would not lie. Second, on the way home our layover was in DFW.  Wolfgang Puck’s Italian Kitchen at the DFW airport… Wood fired pizza oven, superb service, good food… When you walk in the first thing they ask is “when’s your flight?’ so they can make sure and get you out in time.  Really decent bar, and the food actually lived up to Puck’s name, which in an Airport eatery was a shock.

Sadly, the music scene was NOT what I had been led to believe, we couldn’t find live jazz for love nor money on Bourbon street for fuck’s sake.  Yet another casualty of the state’s COVID rules, I guess. We were there for a week and didn’t get to do all that we wanted to do.  We spent a whole day at the WWII museum, and it was not enough. We found a wonderful playground for the kids, though the Storyland place with the little trains for the kids and all of the other stuff has also been closed for the foreseeable future, yes, COVID again.

Midweek we had Bourbon street practically to ourselves, just us and a few homeless.  I want to go back in the spring or fall with just my wife, and maybe a couple adult friends, there were several things we couldn’t do with very young children and my mom who’s pushing 80 and just not up for a lot of walking.  Don’t mistake me, I wouldn’t want to be there in mid-summer, I don’t like any place well enough to put up with that sort of heat, and I still suspect I wouldn’t enjoy Mardi Gras, that level of crowd is just NOT my cup of tea, but on the whole a city and a culture worth keeping.  Please help keep it alive, and let us hope that it survives both COVID and any unpleasantness we are about to experience politically.