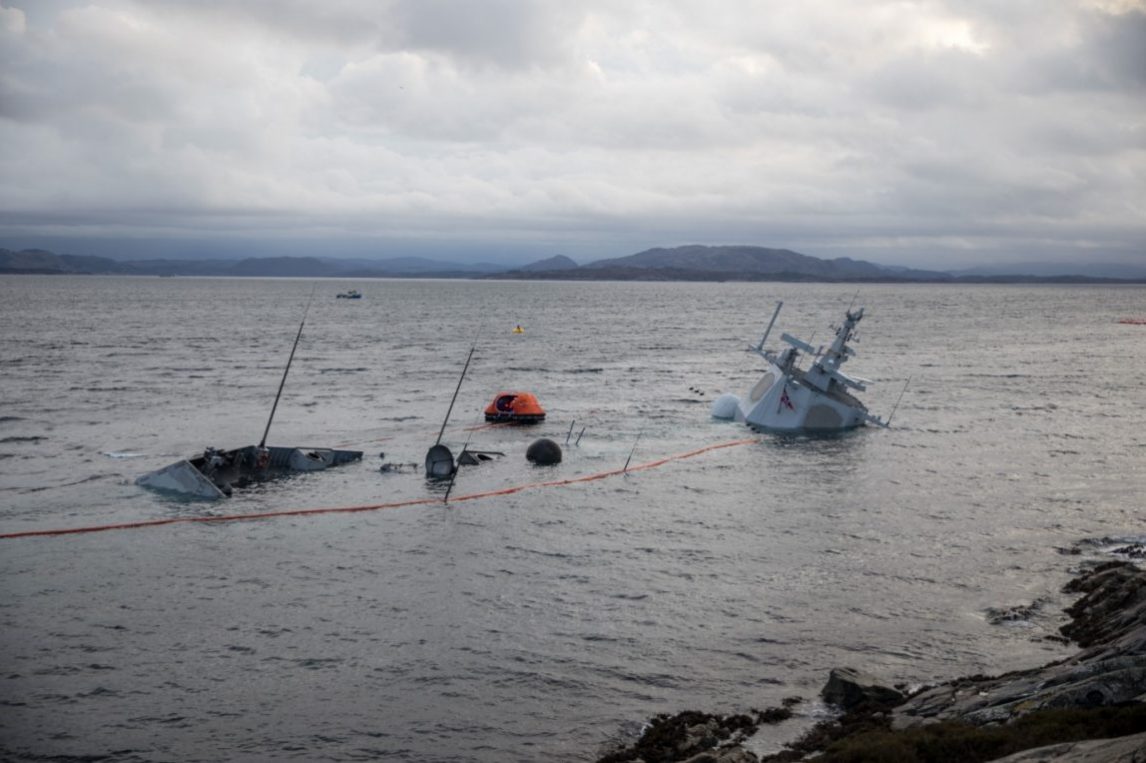 Yet another collision at sea, this one calm weather, just before dawn.  Radio transcriptions say the Ingstad said they had it “Under control” right up until they hit!  After the collision, and after verifying that the tanker they collided with wasn’t in danger, the CO tried to put her on the beach, to keep her from sinking, and they rigged cables to a mountain on the shore to keep her from doing what you see above… The cables parted.

Needless to say, they will be having the inevitable investigation, and someone will end up figuratively hanging from a gibbet. Probably several someones.  But that’s not the only investigation that is going on… Warships are supposed to be able to take damage and stay alive. The collision Ingstad suffered should not have put her on the bottom, though it would have definitely sent her to a drydock for a while. (see also US Pac Fleet, which has, as noted here before, became famous for getting to fix ships after they hit someone.)

And, there is where the other investigation comes in.  Norway is blaming the Spanish shipyard that built her and many like her (Norway runs five of these ships, other NATO navies also operate them.) for poor design.  The shipyard is, of course, blaming the navy. At issue is how the flooding progressed from the compartments that flooded, to the allegedly watertight adjacent compartments, and eventually became more than the ship could overcome.

One of the paths of flooding was the hollow propulsion shafts, one of which became a hose, filling what should have been sealed compartments.  This is a significant design flaw. Not that the shafts were hollow, they have to be due to how long they are, and the amount of torque applied to them.  A solid shaft would snap. Still there are ways to keep this from becoming a flooding path, and apparently, this design didn’t follow those ways. OOPS.

Here’s the bigger takeaway.  Peacetime, especially long periods of peacetime, cause the silly little bean counters with their green eyeshades, and sharp pencils to start looking at ways to cut costs.

Gosh, Admiral, you don’t need the design to be that redundant, after all, what’s the threat?

Gosh, Admiral, you don’t need all that safety gear, when was the last time you used it?

Gosh Admiral, gosh General, you boys sure waste a lot of time on bullshit training ops!

And so, ships die. Men die (no one died in this one by the grace of the Gods, they were lucky.)

Things like the abortion that was the HMS Hood (no radar, no armor to speak of on her decks) get built, (or abortions like the LCS class) and in time of war, die fast, horribly, and take good men down with them.

Training gets cut, and then ships hit other ships.  Even in peacetime, the ocean is an inhospitable bitch looking for an opportunity to take a life: your defense (other than moving inland and never challenging her again) is training, awareness, caution, and over design.  Two of those four are favorite targets of the little bastards with the pencils. Norway just learned that to her sorrow.

Not that they are the only people I’m going to call out today.

There’s been a principle of force management that we’ve (the US military) been using for decades, and some are finally beginning to question it.  About Damned Time!

I speak of the “Up or Out” concept.  That’s right, if you don’t make rank, you gotta go.  This is the stupidest fucking thing in the military right now.  We hemorrhage good officers and good men every year because they were not promoted.  It also drives a mindset of risk aversion, to the point of error.

Everyone is afraid to fuck up because, if you screw up once, you are history, there’s always someone that wants your job, so you’re replaceable.  And if you aren’t ambitious to get your next stripe, well obviously you don’t deserve your current rank. The amount of morale and behavior problems this creates is an entirely different column, and I may write it one day.

NO SHIT, Real story, I was ORDERED to write a bad eval for one of my sailors because he was happy as a second class and didn’t take the First class rating exam!  The XO’s take was “well if you don’t want to be a first, you shouldn’t be a second, you’re obviously a third!

People, this is just fucking wrong.

In the first place, there are people that are happy being senior enough to get out of the worst of the scutt work and want to be technicians, they don’t want to be “people managers” or even “Leaders”, they like being Techs, and operators.  We NEED people like that. In the Officer corps, there are guys that are Technically savvy in their specialty (whatever it is, pilot, weatherman, oceanographer, lawyer, whatever!) but frankly, suck at high command. They are career O-4/0-5 types.  But that’s the thing, you can’t stay in as an O-4 unless you’re ex-enlisted. It’s up or out! And so, you throw away this extremely skilled electronics officer, because he isn’t command material.

Now I get it, that there’s the fear that he may inherit the job of command, due to battle losses, and if he’s not up for that, well he shouldn’t stay in, but that’s bullshit.  Most of those folks, if they are line (and most are not) can manage command, with the able help of the senior enlisted, at least long enough to get the unit somewhere safe, but they don’t like it or don’t want it.

I’m reminded of a guy that didn’t want to fight.  Name of York. Sgt York. Look him up. Meanwhile, we lose guys that would be happy to stay in, and Amazon gets a genius logistics guy because Supply officer lieutenant commander Spragg can’t make rank.  In the enlisted communities, it is often even worse. If you’re a Seabee, for instance, making rate takes someone else dying (almost literally). So, unless you’re a SUPERSTAR at best you make second class.  Unless you get a waiver, you’re out at 12 years (I think that may have changed recently, they may be allowing seconds to stay in again, but if you can’t make second, you’re truly fucked, one enlistment and done.)

Make it easier to get rid of the true dirtbags at the end of an enlistment, sure!  But to pitch someone because they can’t or don’t want to be promoted??? That’s just stupid.  We need good mechanics, even if they’ll never run the shop.

The time to fix this shit is before we find ourselves in desperate need of trained people, people that we threw away.  War doesn’t give you years’ worth of warning, and more and more, it’s a come as you are thing. Your enemy gets to decide when to start it and rest assured that being vulnerable will not make him less interested in fighting you.  He’s not interested in a challenge, he wants a sure thing. Making him sure that he will be hurt bad, and probably lose, is the best way to make sure he won’t start it.