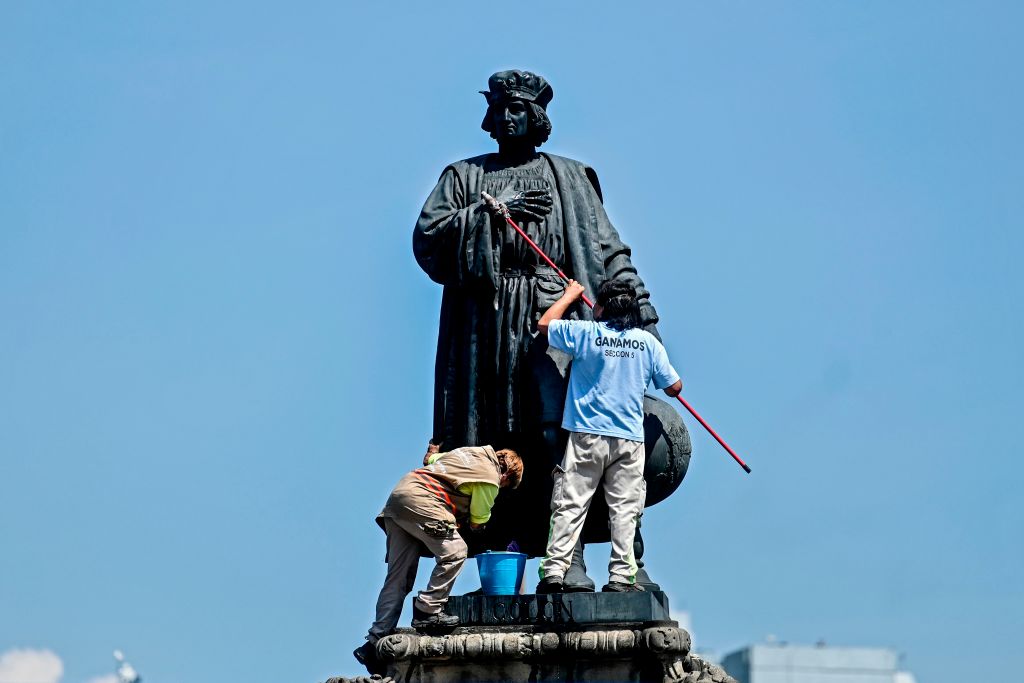 I’m not a particular fan of ol’ Chris up there, but the fact of life is that he did popularize the New World.  Yes, Leif Ericson discovered it first, and there’s some really good evidence to support the idea that Welsh Fishermen and monks discovered it before him, and of course the Native tribes by the thousands were already there… But all of that is irrelevant to the fact that he discovered it too.

The funny thing, of course, is that discovering it wasn’t his goal.  While he was a great publicist, and halfway decent navigator, he was a suck-ass mathematician. See his theory was that everyone had it all wrong, they had slipped a decimal point, and the earth was actually much smaller in diameter than the best minds said it was, and thus it would be faster to get to India by heading west.  Of course, like many great discoveries, the key was recognizing the value of this thing heralded by “hey, that’s funny.”  That piece Ol’ Chris was exceedingly good at.

When you add that to the fact that Spain had been at war for the better part of a thousand years (the Reconquista took 781 years) but suddenly found themselves at peace, with a shit ton of second, third, and so on sons, who didn’t know anything except how to run an estate and how to fight a war, Chris was God’s gift to the Catholic Spanish Throne.  Here was a pressure relief valve for all those guys trained only to fight and rule, when there was no longer anyone to fight except other “Good Catholics.”

Well, I mention all of this, because the revisionist historians are at it again.  There are a bunch of people that see Chris as this poster child for the oppression and colonialism of Spain, and by extrapolation all of Europe against the Americas.  As a result, there are a lot of people that want to, or are, tearing down statues of Chris all over the world.  Most recently, the mayor of Mexico City has made the news in a big way about the fact that she’s going to replace the statue of Columbus in the main square with a statue of an Olmec woman, claiming that this is recognizing the victims of the oppressor, and their “500 year battle for equality.”

Well, here are the problems with that:

First off, we have no idea what an Olmec woman looks like because that civilization was extinct nearly two thousand years before Ol Chris “sailed the ocean blue.”  There are no paintings, there are no sculptures other than stylized, art forms, things like half Jaguar half Human beings… Probably not accurate depictions.  While no one is sure what wiped out the Olmecs the suspects are global warming (So I guess they must have had Sports Utility Vehicles because we KNOW that global warming is caused by man’s industry!) or the rise of the Mayan civilization, which, in the way of civilizations throughout history, killed off the competition.  So NO, the Olmecs didn’t fight the Spanish, they ended their run before ROME was a real going concern!

Then there’s the fact that while modern revisionists would have you know that the evil Spanish killed and enslaved everyone they came across, the fact of the matter is that a shit ton of the Indian tribes fought WITH the Spanish against the real bullies of the piece, the Aztecs.  The Aztecs racked up a kill record that rivaled that of Stalin or Mao, and they did it all without cannons, guns, or even steel, much less modern “innovations” like gas chambers.

This is not to say that the Spanish were good guys.  They weren’t.  In spite of some very good friars and priests who actually did advocate for the local tribes, they did what ANY army of conquest did.  They took the land, took the goods, carved out their own little kingdoms, and enslaved anyone who wouldn’t work for them willingly.  Frankly, though their death toll is much smaller than the Aztecs they took out.

That’s another funny thing, all of my local Mexican restaurants, most of the local Hispanic gangs, and of course La Raza, etc all depict themselves as the Aztecs. The paintings on the walls of the restaurants all have themes of this mighty Aztec warrior, and of peaceful agricultural scenes…

Got news for you folks.  The likelihood that you have any Aztec blood in you is damn slim.  They were not the majority population even at their height.  Like the Spartans, their civilization was propped up by slave labor, and they were the minority even in the areas where they ruled.  Further, they were mostly KILLED.  If you have Mesoamerican Indian blood, it’s most likely that you were from one of the tribes that either ran away from all of the conflict, hid, and prayed to their deities that they weren’t noticed, OR you are a descendant of the winners, the guys that fought alongside the conquistadors.  In addition, I guaran-God-Damn-tee you have some conquistador blood in you as well, because they were not plaster saints, they WERE an invading army, in an era where “to the victors go the spoils” and women were on the “spoil” list.  Most of them didn’t bring good Hidalgo women to this malaria-filled, uncivilized land, they instead “went native” as the British of a later era put it, and got themselves Indian wives, concubines, or just plain rape victims.

Sorry but that’s the way war was fought from the beginning of war until roughly 1900 or so, and in some places the way it’s STILL fought. Is it pretty?  No, but then the real world seldom is.  On the other hand, the Aztecs did the same thing and weren’t even able to develop metallurgy, medicine, or the WHEEL.  Not exactly poster children for much, except slavery and human sacrifice.

It’s often said that “the victors write the history books.”  More and more, it seems that the losers do the later revisions.

More on that front, our current “Fool In Chief” claimed that he got virtually all of the Americans out of Afghanistan.  Seems there are at least six aircraft full of Americans and Afghani allies sitting on the ground at Mazar-i-Sharif airfield being denied permission to take off by the Taliban.  A reliable source (Michael Yon, an independent war correspondent who has a tendency to go where folks from CNN et al won’t.) states that the Taliban have been pulling any non-Americans off the birds, lining them up on the runway, and using them for target practice. Oddly enough, that’s not showing up on the mainstream media…  Gosh, I wonder why?

Various reports are saying that our US State department is not permitting the aircraft from taking off, that the Taliban is blocking them until the US government recognizes them as the legitimate government, and starts giving them aid, or a combination of the two.  Under any circumstance, we could get those birds in the air fast, with one little visit by a few military aircraft, and a judicious application of High Explosives. This has been the most shameful episode I have lived through in my life and considering that I was born about the time we got into Vietnam, that’s saying something.

I remember thinking that no one, absolutely no one could ever beat Jimmy Carter for the most incompetent and pathetic excuse for a president in the modern era.  Yet the last few Democrats seem to be trying to continually raise the bar.  I thought Clinton was bad.  Obama made me wish he was back in office.  Now, I would take Obama over this poster child for Alzheimer’s.

May the Gods have pity on a nation that could elect such a moron.