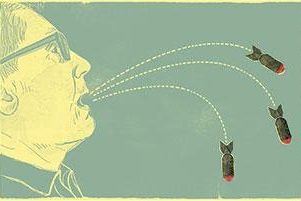 Hey, it’s hotter than hell out (for Washington… Look, if I wanted to live in an oven, I would have taken a job in Virginia, or Georgia.)  So someone pour me a cold beer, get one for yourself, and let’s find a place with a breeze to chat.

I’ve talked about this before I am sure, but this is one of those topics that keeps coming up, and for good reason.  A dear friend of mine posted a cartoon the other day, it was the Memorial Day Cartoon from Pearls Before Swine.  I would post it here, but I’m not sure how the whole copyright thing would affect things in this case, so I’ll refrain… I would like to keep my publisher out of trouble, since he gives me this lovely soap box to stand on.

Anyway, the cartoon dealt with the whole Red V Blue situation in the nation today, and reflected on the idea that the behavior we have all been exhibiting of late is not what the boys interred at Arlington, Punchbowl and other national cemeteries died for.  Stephan Pastis (the cartoonist) is indeed right on that, as far as it goes.  It’s not so much his cartoon that I’m writing about, but one of the comments in the comment piece under the cartoon.

(At this point, all the authors in the room cry “Dude, NEVER read the comments!”)

Well, a mutual acquaintance commented that they were “sitting on their fathers grave staring at the flags, and thinking about the veterans who stormed their own capitol.”  They proceeded to express concern for how we got here, and how we get OUT of here?”

Well, that’s sort of the inspiration for this piece.

If you want to have a conversation about “how we got here, and how we get out”, or to go back to the cartoon that started this all, with two people talking past each other, then realizing that they are in fact “failing to communicate” and wondering about how to fix that. Now, please, allow me to provide a little more light and a little less smoke.

Let’s start with that first phrase that this person wrote. “Veterans who stormed their own capitol.”  The operative word here, is “stormed.” To a Veteran, “stormed” means: assaulted with overwhelming numbers and deadly force.  The revolutionaries stormed the Bastille, the Mexican army stormed the Alamo, and Marines stormed beaches all over the Pacific.  The choice of that word was, I suspect, intentional.  Meant to elicit an emotional reaction.  There, folks, lies the trouble.  If you’re trying to create an emotional reaction, you will, on both sides, and communication fails.  Once emotions turn on, higher reason turns off. If they didn’t do it intentionally, then they did it because they’re parroting what they’ve read, and that may just be worse, I thought they were smarter than that.. I am fairly certain that this individual thought that the phrase was deserved.  Having been involved in the storming of a thing or two, I’ll tell you that this event wasn’t a “storming.”  The only guns were in the hands of the cops, the closest thing to weaponry the rioters (see, I’ll cop to “riot,” though even that is a loaded word, “protest” would be a better choice) had was bear spray.  Let’s compare and contrast with the Seattle and Portland riots with spiked bats and Molotov cocktails.  Yet this individual called those “protests” and the attempted arson of police stations with the doors chained up from the outside as “righteous anger.”

Oh, don’t get me wrong, the right does it just as frequently: “Democrats in Texas walked out of the state legislature to torpedo a vote,” while the same outfit talks of “Oregon Republicans fleeing to keep from being steamrolled.”

The Left Mainstream Media never fail to use “falsely insinuated” or “tells the lie” or other words like that when discussing the question of voter fraud.  It’s funny, they used exactly the same words and phrases when discussing the concept of COVID being a virus that escaped from a lab, until recently… Then suddenly the words flipped.  I will give credit where it’s due, a few journalists are calling the NYT and others, on this really violent about face with no apology or shame.

Another perfect example in the news today: depending on which article you read, the person that killed Mollie Tibbetts, a 20 year old college student from the University of Iowa was either: “a farm worker” or “an illegal immigrant.”  Both are true, but what you emphasize not only shows your perspective, but emboldens your base, and angers your opponent.  See that’s the way the game is played now.  If you’re on the left, that thing that happened in the capitol building on 6 January was an “insurrection” as they “stormed” the capitol.  If you’re on the right, it was a “protest” against “voter fraud, and an illegal election.”

If you really want to figure out how to “get out of here,” the first step is to choose your words with care: To ask, then listen to understand, instead of listening for points to score.  To not use emotion loaded words to describe your position and put words in the mouth of your opposition.

If you’re not willing to do that, you might as well just start the ball now, because you’re playing the music, and folks WILL dance.  This is not a dance anyone should want, the Devil is playing the fiddle, and he WILL be paid.