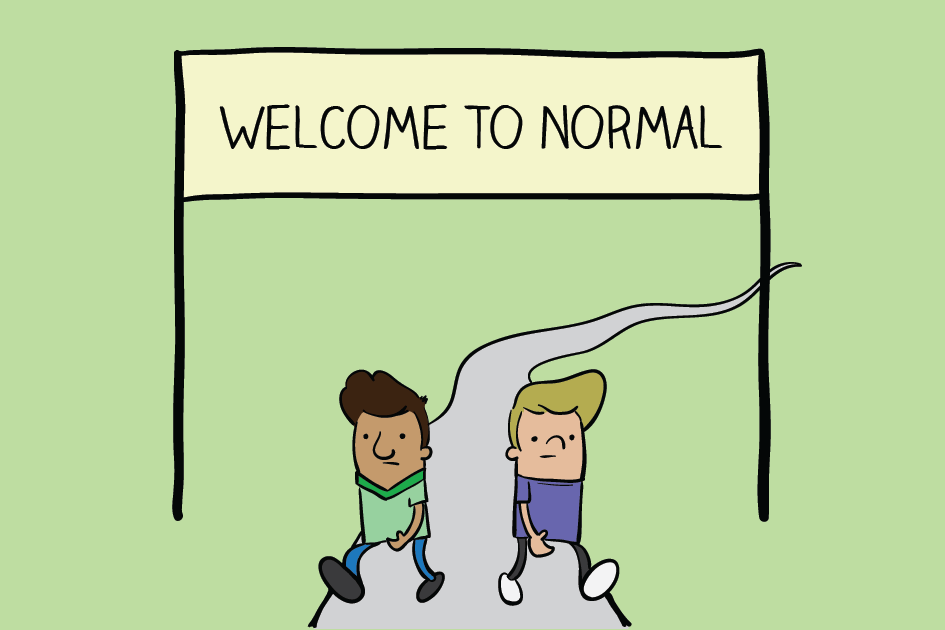 Normal, now there is word that floats around a good bit.  What does it actually mean to be normal? Does the world dictate more than we realize to what the ideal of normal actually is? What pressures do we put on ourselves to be “normal”. Are we born with the want and desire to be normal? Or is it possibly that our idea of normal is not what we thought it to be in the first place? Perhaps it it the simple fact that we as Christians walking this world were never meant to be the proverbial normal.

As a kid I would definitely say that being normal was not a strong suit for me. I knew from the get go that I was different than most of the kids that I grew up with. One my first part of the questions that I asked my mom after my first day of school was why didn’t anyone like me. They laughed at me because I was the “fat kid” and the center of their never ending comments on why do you eat so much and why does your skin look like that. I  asked why I couldn’t have a hot lunch like everyone else  and why I didn’t have clothes that looked like everyone else’s. It seemed so important to fit in and be part of the in crowd. Jelly shoes were everything to me and all I wanted to do was fit in.  I wanted so desperately to have friends and be accepted. My mom being the wise woman that she is said that I needed to only be me. That I could do my best to be everyone’s friend and there was nothing that I could do to change what happened. What they did was entirely up to them. They would eventually come around and not dislike me if I continued to be nice.  As it turned out as it was many times with my mom she was right. Now, to say that I won everyone over would be a far stretch from the truth. I did however make friends and learned a valuable lesson early on that being the norm was perhaps not the thing I needed to be after all.  Being kind was more than worth the effort it. Knowing that no matter what the right thing had been accomplished.

Life continued and we moved around several times because of my dad’s work. For a short time we lived in American Samoa. Now that was a whole new level of not being normal. Sure everyone around me had dark hair and dark skin but that was about all we had when it came to being similar. My first day of school on the island was terrible because though I looked like I could fit the part of Samoan I was far from understanding what they were trying to teach me. I couldn’t even read what they had on the chalkboard let alone recite the alphabet in a different language. I was given a ruler to the hand for not understanding. Needless to say that was first and final day of school on the island. I did manage to make some amazing friends despite being an off islander. I simply made friends with all the other off islanders with a few locals mixed in. Those island days are to this day some of my favorite memories.  Snorkeling in the reefs, fresh fruit, and the most amazing view that anyone could ever ask for.  That this was not normal for most people but it was quite normal for me. Yet again God was teaching me that I didn’t have to be their form of normal. I could make it, despite some adversity along the way.

Living deep  in Cajun country (Louisiana) for much of my life taught me countless lessons in being different and being just fine being me. Everyone seemed to know everyone and so and so was related to so and so by some far removed cousin. The Cajun French accent was beyond comprehension sometimes. It felt like we would never “fit in” . My family and I were all we had and that all on it’s own made me so thankful for them. Though we didn’t have a few hundred cousins, we had each other and that was what mattered the most.  I was always considered mature for my age. Talking to adults was so much easier than talking to kids sometimes. They just got me and there was so much to learn from them.  The kids I met were nice enough but never seemed like they wanted to hang around me much. I was home schooled, though some would say that it was a great way to make me socially awkward I say it taught me get along with people of all ages It wasn’t like I never saw people. I just learned to interact with people of all different ages. As I grew older I managed to make quite a few friends with people my age, who are still some of my dearest friends today.

Church and living in the presence of God became the focal point of my life and the sense of family and belonging was never in want.  I came to discover that normal was only defined by how much stock we put into of what others thought. That being a Christian and standing up for was right and true was not always going to get the popular vote. The realization of “the popular vote” not being the important thing was so freeing for me. I knew in that very moment I was not mean to be like anyone else because there was no else like me walking the earth. Yet again my mother was right. What I thought and felt was individual only to me because no one else could know what I was thinking or feeling deep down inside. That was for God and my daily walk with Him in each facet of my life. It was solely up to me to seek Him daily and his guidance in my life.

So here is to a week of not being normal. It is highly overrated and can quickly distract us from what is so important. It is not the always about the journey… what matters is the destination.  We as Christians were never promised an easy or uncomplicated life. It is the fact that we walk in fellowship with like minded people that make the world a better place.  The pressure that we put on ourselves to be the perfect such and such and what will so and so think if I don’t do what they say to do. We live in a world that gets so caught up in the what if and if only. Knowing that we don’t have to be this world’s version of normal is where we find freedom to be our own version of normal.  Maybe it’s more so a version of not being normal that will make the biggest difference.  Be your own version of normal, it might take you by surprise.  #bethechange #lovealways #makeadifference #dontbenormal