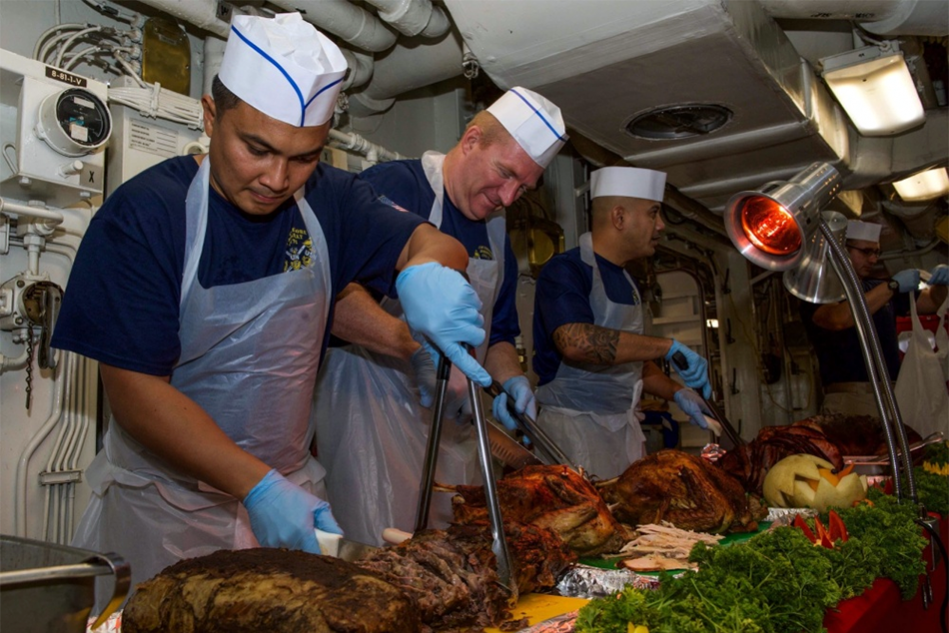 Slap some of that Rotisserie Bird on your plate, make sure to get some of the gravy, it’s one of my wife’s specialties.  Don’t forget the brie sauce, put that stuff on everything. Here’s some wine or some beer to go with it, now let’s chat.

I spent the next three Thanksgivings on a submarine… We wound up at sea each year around then, once on sea trials, twice on special operations… It’s always a bad thing when you’re loading whole turkeys in July, that means you’re expected to still be out when Turkey day comes.  I spent several more over the twenty years at various bases, or boats at sea, to include Lackland AFB where I had the duty on Thanksgiving, while there for a school. (the junior-most individual serving us food that day was the Command Sargent Major. The senior was a one-star, she was cutting the Prime Rib.)  I did several turkey days as a cop, having the shift that day.

I am thankful for all of that.

Why do you ask?

One, we were doing a job that needed to be done, and doing it in such a way that we “won”.  For values of win that are “The US won the cold war and a couple of hot ones that I was part of.” And “Bad guys went to jail, no one had to shoot anyone, and everyone got home safe”.

Two, we almost all came home.  In my whole military career, I only lost five shipmates.  When you consider some of the things we did, some of the places we went, that was a blessing.

Three, I would not have missed it for the world.  Oh, I would happily not have been deployed or had the duty on the holiday, but that was part of the deal, and I found it overall, in spite of all the suck, to be a good deal.  We did things that needed to be done, and we did them better than anyone else in the world, as witnessed by the fact that we came home.

Second the list that we all share: If you’re reading this, you are living in the best time (to date) to be alive in all of history.  We are healthier, safer, with a better standard of living than at any time in the history of mankind. If you’re an American, even more so.

OK yes, we have a few problems.  Guess what sunshine, we have ALWAYS had a few problems.  There has never been a point in history where there were no problems or issues.  Pick a period: ’50s-’70s? maybe you don’t remember the race riots, or the anti-war riots, the SLA, the KKK, the Black Panthers, ‘Nam, Korea, etc, but I do. Hell in the early 50s there were still people starving to death in Europe from the aftermath of WWII.  80’s-90’s? Looked a lot like now, but with an economy that wasn’t as strong, a cold war that was still going on, a couple of little brushfire wars, the same sorts of riots and bullshit that we see today, only the names of the players have changed. Before the fifties you have the second world war, before that, you have the Great Depression, the gangland wars of the roaring 20s, world war one, and so on.

You didn’t have vaccinations, so prior at any time prior to the 60s (Salk’s vaccine came into being in ’55, wasn’t widespread for a few years, MMR is on about the same timeline, as is whooping cough and Diphtheria )  the risk of losing at least one of your kids to polio, German measles, Diphtheria, or any of a number of childhood diseases was huge. As late as 1980 our infant mortality rate was over 1,288 per 100,000. It’s now 567 per 100,000.  We feed more people with better food than ever in history. Someone starving to death due to something other than custodial mistreatment is almost unheard of. The number of people living in abject poverty anywhere in the world is so low that in the 1980s we shifted the scale so that it would still be visible.  In the 1960s 60% lived on under $2.00 a day, worldwide. Today less than 10% live on under $1.90 (that’s down from 44% in 1981.) (Note that these numbers are from the world health organization and adjusted to 1980 dollars)

Further, if you’re reading this, you have a computer and the internet, which means that you have virtually the sum total of human knowledge at your fingertips.  My Gods man, you can find out, in seconds, information that in the 80s involved research at a major university, and months of work, all now governed only by “how good is your google-fi?”  We are in the age where knowing things isn’t as useful as being able to find out things, and knowledge is freer than it’s ever been.

The corollary of this is that if your nation wants to stay competitive you must allow your people to access the web (this is the difference between China and North Korea. China is trying to stay competitive, which means they allow people on the web… Of course, that brings with it, people who know more than what the state tells them, and so we get Hong Kong, which may break the bamboo curtain in time.  North Korea has no danger of experiencing a Hong Kong, but also no danger of becoming competitive with even third rate nations like South Africa.)

I promised myself that I would stay away from the current doings in D.C. so all I’ll say about that, is that I am thankful that we have a Commander In Chief who, when people that work for him say “If you don’t like that, you can have my job”, the second time, he takes them up on it!  Former Navy Secretary Spencer, you worked for the President, I know that’s confusing, but hey lots better people than you (cough MacArthur cough) couldn’t figure that shit out either… Glad you’re gone, hope they send Admiral Green down the same sewer pipe.

Until next time, Have a great Thanksgiving.