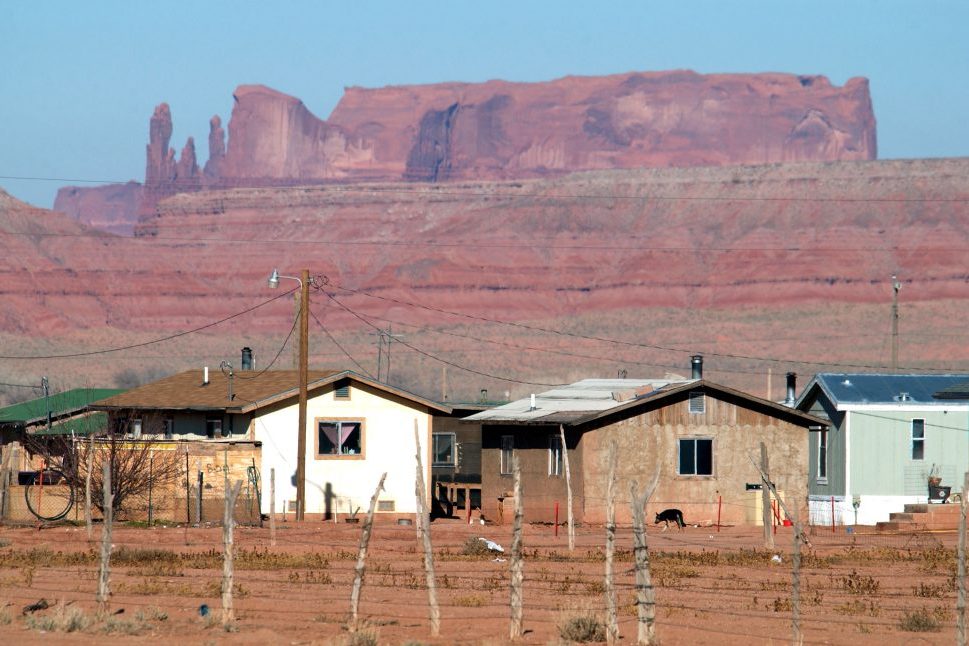 When we give someone everything, when we say “I will take care of you and see to all of your needs,” we infantize that person, and I am against it.

The picture above, is, obviously an Indian Reservation (I’m guessing Navajo, but it could be any southwest tribe, really), but it could just as easily been a picture of Cabrini Green, or Bremerton’s now defunct “West Park” (an old WWII military housing area made over into section eight housing, and eventually bulldozed, due to health concerns.)

Or any other place where we put people that we are going to take care of, for life.  These places are evil. Yes, I really mean that, they are bad, destructive, and destroy human potential.

I’ll start with the “actual” reservations, the ones for the various tribes.  Look, we screwed over the Indian worse than we screwed over any other group before or after… No, not because we took their lands, though that’s part of it, but because of HOW we did it, and how we treated them after.

We made them “separate nations” cared for, and a ward of, our government.  In short, we infantized the entire damn tribe, with “Don’t worry, the great white father will see to all of your needs.”  THAT is the most evil thing we did to them. We took their pride, their identity, and their initiative. When you reduce a person to waiting on hand outs and discourage them from trying to get out of the cycle, you’ve done far worse than just killing them, you’ve killed their hope.

Further, if you’ve ever driven through or lived in one of these places, you know… They are falling apart.  Not because they weren’t built well, some were, some were not… but because that which we obtain too cheaply, we value too little.  When everything is given, nothing has value.

Yes, this is a generalization, and there are places on any Res that are in great condition and well cared for. Those are the outliers though.  Those are the ragged edges of the bell curve, and not the way to lay a bet… Just like there are those that come out of childhoods in such pits of despair and do great things.  It can happen, but the odds are massively against it.

“OK you crusty old bastard, what would you have done?!”

We should, in my not so humble opinion, have taken a page straight out of the Roman Empire Playbook.

Look, the defeat of the American Indian tribes, while it was not a sure thing in 1605, was strictly a matter of time by 1776.  Even with some boosts, the Indian tribes were still basically at stone age, or early bronze age technology, hunter gatherers, with no more social science development than what in Europe would be called “clan”.  Such a society was doomed, when staring at an early industrial age invader. Make no mistake, invasion was inevitable, if Europe hadn’t done it, Asia would have eventually. It’s human nature (especially in the eighteenth and nineteenth centuries and before) to expand your culture until you run into someone or something that stops you.  The tribes themselves did the same. Europe did the same. Hell, plants do the same, it’s a universal constant. (OK at least global, we’ll see about universal once we get out among the stars.) So, in the end, the Indian and his way of life is screwed…

What to do though? The right answer, to me, was discussed and shouted down.  Just as Rome did to conquered areas, you assimilate! OK Cree warrior, we kicked your ass, you surrendered.  Congratulations, you’re one of us now! Here’s a premier, we’ll teach you to read, once you learn how to read, we’ll give you a ballot, you get just as much vote as G. Washington himself!  Sadly, there were a lot of eastern merchant class types that really didn’t like that idea, and killed it. They were absolutely horrified that a “savage” would be considered the same as they, and even more horrified that they might have to pay for the land they wanted.

They created the mess that we still have today. Not the Cavalry, not the farmer, it was the big money guys back east who demanded from the government that “the savage be controlled” and don’t you even think that he would be considered my equal!  Unfortunately, there were some otherwise very smart folks on the wrong side of that argument. It’s something we will and should, regret forever.

We should have let them keep their tribal name, in the same way that you can still be a McGregor, (or a Graham, or any other Scottish clan) but you’re an American, first and foremost.

Along with that vote, you “mister new American citizen,” have all the other rights and responsibilities, you have to obey our laws, you may propose laws, and you need to find a job and a way to make your way in the world.

Sadly, we didn’t go this route.

Then in the 60s we doubled down on making people wards of the system, with the new reservations… Oh we didn’t call them that, we had a different name for them. We called them the “projects.”  Second verse, same as the first!

“We don’t think you can make it without us caring for you,” (see one of my prior articles, “The Soft Prejudice of Reduced Expectations”) for more on this…

“We are sure that you need us to give you a place to live, and food, and heat”… The givers were then somehow surprised when these places not only did not get people out of poverty, and then out of the projects, but within ten years the places were falling apart, the cops only went in at least pairs, when, in short, they became shitholes.  We were surprised as if we didn’t have a century of experience in reservations to look at!

Does this mean I believe homeless people should just freeze to death and starve?  That those on SSI and unable to work should just go expose themselves on the mountainside?

Go wash your mouth out with soap. And while you’re at it, you might give your brain a rinse, someone’s already washed it for you.  This is the logical fallacy of the “False Dichotomy,” the belief that “If not A, then B” as if there were not 24 other letters in the English language.  In short, don’t be an idiot, if you can help it.

If you FLAT OUT can’t work, you probably did work, and probably for many years.  Gods know the few people I know that CAN’T work, did. So, you paid your dues, you took care of society, it’s our turn to take care of you, and to make sure that you understand this is not a “gift” it’s returning the favor, it’s paying the debt you are owed.

Otherwise, you work for it.  That may be answering the phone, or cooking for the daycare that is there in the project, but you do something!  Otherwise you don’t eat, and you do get to find out what starving to death on the mountainside is like.  While you’re doing that something, you’re both earning money, and learning a skill to get you out of the projects. You’re developing a little thing we used to call a “work ethic,” along with some basic skills. Hell, just showing up for work on time is a basic skill, and one that some folks today seem to lack.

The alternative, is to continue to waste the human potential that is right in front of us, instead of giving REAL hope.  The hope that seeing yourself not infantilized, but provided with the tools, and the belief to stand on your own two feet, that seeing yourself treated as an adult, a human, equal and able to succeed, first in small things, then in larger things gives.

Giving “free stuff” is a mind killer. We must stop it.