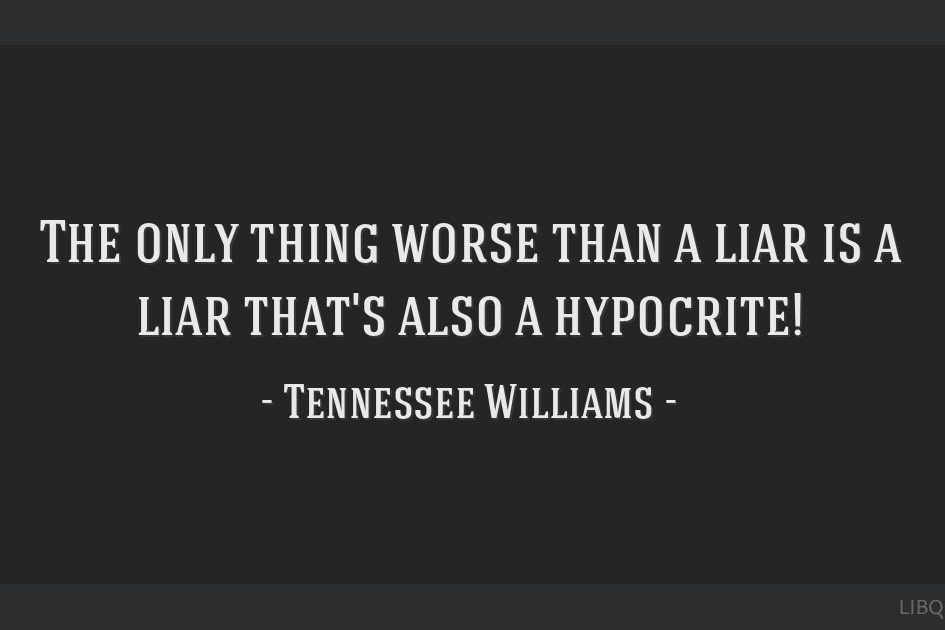 Well, the title says it all.  Look, I served with a chief who was a Chief. (as in Nez Perce Indian Tribe) His family ran a few hundred thousand acre ranch on the CA/OR border breeding and selling POAs (Pony of the Americas.) Now it’s not so much that he taught me anything that was radically new in concept to me, but he put it in a way that stayed with me, even when I was having problems with the concept.

But it’s not that hypocrisy I want to talk about today.

First we’ve got the hypocrisy of just about everyone from President Biden on down through Fauci, down to the New York Slimes.  A year ago, President Trump and several other folks from Microbiologists from MIT were suggesting that the WU flu was leaked from a Class 4 Bio lab in Wuhan that is known to work on Bio weapons among other things for the Chinese government.  They were shouted down, ridiculed, called idiots and worse.

“Shut the fuck up” he explains. “It didn’t count when Tom Cotton, who’s a double bad, evil, not good, lying liar who believes in election fraud; WHICH SO DIDN’T HAPPEN DAMN IT SO SHUT UP ABOUT IT!!! Or that known enemy of the people TRUMP talked about it, and Oh my GODS, FOX NEWS talked about it, because we CAN’T agree with them!  But see now we need to walk it back because well, now that we got Trump out of office, it’s inevitably going to come out that China did cause it, and we need to get in front of the story, so that it looks like we’re all honest and noble and shit.”   I’ve pinged on this particular shit-weasel before, he’s a great apparatchik for the ultra left, but this article is almost honest, at least if you know how to read left doublespeak. He does admit that the dismissals were “a classic example of groupthink, exacerbated by partisan polarization.” And “Global health officials seemed unwilling to confront Chinese officials, who insist the virus jumped from an animal to a person.”  Mind you, much like a character in an old sitcom from my teen years, he can’t quite admit that he was “W-w-w-wro- well I wasn’t quite fully right!”

While we’re talking about China, and hypocrisy, let’s take the case of John Cena, and by extension Daimler Chrysler, Daryl Morey, the companies H&M, Rersace, Givenchy, and Coach, among others.  What do they all have in common; you ask?

Well, they all had the audacity to not speak the proper Chicom Pravda. Seems that Cena was the latest to make the mistake of telling the truth by calling Taiwan a country. That’s a very bad Thought Crime as far as China is concerned, and “is an Offensive Assertion!”

Cena was made to apologize, and some probable agents of the Chinese government, demanded on social media “Please say “Taiwan is part of China” in Chinese. Otherwise, we will not accept your apology!”

Well how about this Mousy Tongue, “Taiwan is the rightful ruler of China, and if it weren’t for that baby raping, syphilitic, genocidal, pervert Mao, and a bunch of idiots that were willing to follow him, you would be better off, and an actual nation worth talking to, instead of a genocidal hell hole that frankly should be destroyed.”  Do you like that better?

I like that better.  And it’s honest.  Of course, being honest is against the policies of the People’s Democratic Republic of Free China.  (Lehman’s first rule of international politics: the more words meaning “free” in the name of the country, the less freedom in the country.)

And speaking of freedom, let me just give an amazed shake of the head in the general direction of Belarus.  Damn, dudes, that takes some serious balls.  If you have somehow been unaware of this story, they forced down an airliner flying over their country because it had a Belarus Expat journalist onboard, and they decided that the fact that he was in their airspace was a great time to put the Habitus Grabbus on his ass, by scrambling fighter jets to force the plane down. Uh, needless to say, while they succeeded in forcing the plane down and hauling this guy out by his ear, they also earned the complete enmity of the rest of the world (minus, you know, other dictators: like Putin, Kim, Xi Jinping, and the mad Mullahs in Iran.)

Finally, we have Microsoft, Google and Apple who are “helping” the consumer, and “ensuring that the customer’s Safety, and Security, is maintained, while protecting them from Fraud!”  Yeah, by anyone but Microsoft, Google, and Apple anyway.  See the claims that they are “helping” and all the rest of that bullshit is the excuse they are giving for fighting the Right to Repair laws.  You remember them?  I wrote about them a while back as one of the few things that Europe was getting right. It seems big Tech doesn’t agree with me.  They’re sinking BILLIONS into fighting laws that would force them to allow third parties to fix their shit, instead of buying new.  Funny thing, those three claim to be all about “Protecting the Planet” and “GREEN.” Yet we dump broken electronics full of some really persistent nasty stuff like lithium in the ground by the metric ton, because these fucks won’t let people fix their crap… They’re making too much money by selling new things.  That rounds out the Hypocritic hit list to today. Not because I’m out of targets but because I’m out of time.

Stay safe, and watch your six.