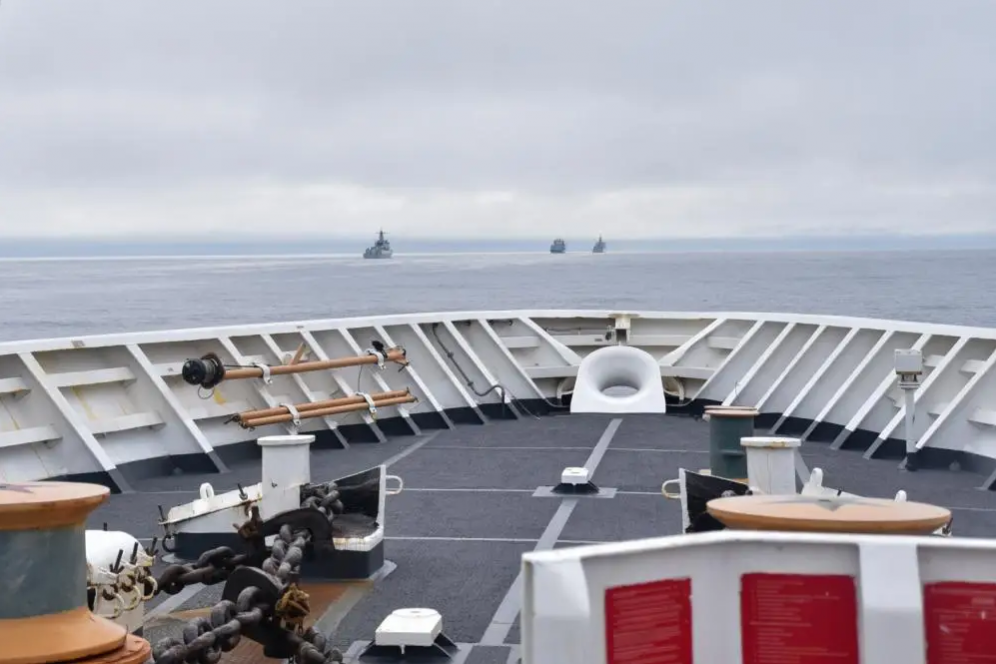 All the usual suspects are trying to stir up shit, and exhibiting their hypocrisy in doing so.  The picture above, is a PLAN (People’s Liberation Army Navy, AKA Communist China) warship task group about 11.9 Nautical miles off the Alaskan coast.  It’s taken from the deck of a USCG cutter which is keeping our dear buddies company.  This happened August 29-30. https://www.scmp.com/news/china/military/article/3148725/us-coast-guard-spots-chinese-warships-alaska

It wouldn’t be a big thing, if it wasn’t for the fact that China just lost their shit over the USN cruising a destroyer and a CVN up past Mischief Reef in the Spratly Islands.  You may remember that this set of islands (at low tide), reefs, and shoals are claimed by about five different nations, and China has thrown some really sharp elbows around, walked on to them (especially Mischief Reef) dumped rocks and soil onto them, making artificial islands, then fortified them as military bases. All using the excuse of the so-called “Nine Dash Line” found on a map China wrote in 1947, and has recently pulled out of the museum to use as justification for “this has always belonged to us.”

Since the other folks that are claiming these islands aren’t big enough to start a war with China, no one has thrown them off said rocks.  That doesn’t mean that anyone except China (including believe it or not, the usually completely worthless UN) recognizes their claims.  One of the ways the USN exhibits their unwillingness to just roll over and let stand such land grabs (we did the same thing with the Libyan “line of death” in the 80’s) is to cruise our warships inside the claimed waters in an FNE (freedom of navigation exercise)  basically saying, “we don’t recognize your claims, and you haven’t got the sack to start a war over it!

Well, this time, the Chinese started a little propaganda war, with the Editor in chief of the Chinese Government run newspaper saying: “Hopefully when Chinese warships pass through the Caribbean Sea or show up near Hawaii and Guam one day, the US will uphold the same standard of freedom of navigation. That day will come soon.” In a tweet (see link) https://twitter.com/HuXijin_GT/status/1435574564893851649?ref_src=twsrc%5Etfw%7Ctwcam p%5Etweetembed%7Ctwterm%5E1435574564893851649%7Ctwgr%5E%7Ctwcon%5Es1_&ref_url=https%3A%2F%2Fwww.stripes.com%2Fbranches%2Fnavy%2F2021-09-09%2Fus-navy-south-china-sea-freedom-of-navigation-2816156.html

Sadly for this government hand puppet, the USN Chief of Information called them on their shit.  Twitter seems to be a favorite propaganda organ for these guys, a little walk through the stuff linked off of that link is quite amusing.  If you have any delusions that China is not our enemy, that little skim will remove them, and please bear in mind this guy speaks for the Chinese government. They don’t have a “free press.”  I’m guessing though, that he wasn’t up on what his navy was doing, because he sort of didn’t know what to do when we pointed out that “uh, shitbag, you’re already doing this.”

In a related note, Taiwan just commissioned a locally built “carrier killer” (it looks to me like a very heavily armed destroyer) specifically aimed at letting the Chinese know that they aren’t going to go gently into that good night.  They’re building 6 of them.  Even if they have to trade three to one, they win, a DD is a lot cheaper than a CV.  They are also building locally constructed Submarines, which will be a lot more trouble to those two little jeep carriers the Chinese currently operate.  (Their carriers have about 44 aircraft each. A Ford class carries 90) If we had a lick of sense, we would have some folks over there helping them design these craft, and making sure we can work alongside them.  Because we are liable to have to.  China has been sending fighter jets up to the edge and beyond of Taiwan airspace all week.  This is continuing to heat up, as this writer suggested would happen when Biden screwed the pooch in Afghanistan.

Not to be outdone, North Korea just did a test of a medium long range Cruise Missile that they claim flew 930 miles.  This is supposed to be a nuke capable missile.  Now, the fat little boy in Pyongyang is nothing if not predictable.  Any time that other people are being talked about and paid attention to, he throws one of these little tantrums as a method of trying to regain the attention of the world.  It’s like the little kid that breaks the china dish just so that someone will pay attention to him.

This doesn’t mean that he’s not capable of causing some serious mischief, he most certainly is.  That same little kid might go so far as to burn down the house just so people will pay attention to him.  Someone needs to spank this little shithead, with an ax.  This is one of the few times that a single well-planned assassination would solve a LOT of problems.  If you can take out the whole family, even better.

Oh and Iran suggested that they are within a month of having enough fissionable material to make a nuclear bomb, likewise in a “PAY ATTENTION TO ME, DAMN IT” moment.

On the domestic front, we have a couple of winners too.  First we have the JCSC (Joint Chief of Staff Chairman) General Mark Milley, who admitted to a couple of journalists (Woodward and Costa who then wrote a book) that he had called his opposite number in China and told him that he should not worry, if the US was going to attack, he (Milley) would call General Li Zuocheng and warn him that an attack was imminent. ““General Li, I want to assure you that the American government is stable and everything is going to be okay,” Milley told him in the first call, according to the book. “We are not going to attack or conduct any kinetic operations against you.”

“If we’re going to attack, I’m going to call you ahead of time. It’s not going to be a surprise,” Milley reportedly said.  This is conspiracy to commit espionage at best, treason at worst.  Seriously, the absolute highest ranking uniformed officer in the US military going behind the president’s back to assure a foreign power that he would call them to warn them if the Commander in Chief decided to attack them??? What in the actual fuck?

Next, we have that moon-bat AOC… Seems she just attended the “Met Gala” in NYC.  This little soiree’s tickets START at $30,000 each.  She attended with a “plus one” so that’s minimum $60 grand.  Then there’s the one-of-a-kind designer dress she wore.  Now I have NO idea how much a one-of-a-kind dress costs, I am not now, nor am I ever likely to be rich enough to buy my better half such a thing.  The point of all of this is that said dress was white with giant red letters across the back saying “tax the rich.”

I’m pretty sure she dropped more on that one little night out than I make a year, or at least close to it.  Yet more of the “rules for THEE, not for ME” bullshit that the Democrats and other Autocrats, Plutocrats, and other Rats have been espousing since the days of the Caesars.  It’s worth noting that this is the same jackass (sorry, that’s a slight to a noble animal, but have you SEEN this gal smile???) that killed a Headquarters in Queens that brought 25,000 good paying jobs, because she didn’t like Amazon.  Tax the rich indeed.

And of course, finally we have President Biden and that rat bastard Fauci who repeatedly swore up and down that they would never support mandatory vaccinations forced by the Federal Government.

That of course was before the election.

Now, it seems they have a different perspective.  If there isn’t a lawsuit being filed against this massive governmental overreach, then we are already gone, the rule of law has collapsed.   If the Courts and the congress roll over on this, we’re done as a government of the people, and the Caesars have taken over the nation.

What’s in your weapons locker?  Are you proficient?  The time to get that way is, I fear, running out.