How to Step in it By the Numbers 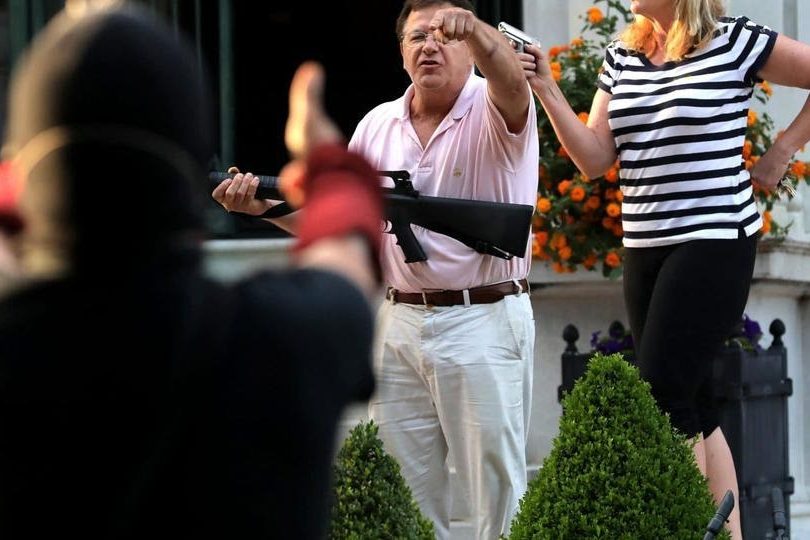 Grab a beer, and let’s talk.

Several wise tacticians over the years have said variations on the theme that you should not interrupt enemies when they’re in the process of making a mistake.  Well, the process is over now, we’re now at the “pass the popcorn, this is going to be good” stage on a couple of items.

First, let’s talk about the City of St. Lewis v McCloskey case.  As you may remember, the Circuit Attorney, one Kim Gardner, filed charges against the McCloskeys for the crime of “felony Unlawful Use of a Weapon, and Misdemeanor Fourth Degree Assault.” Due to the little incident immortalized in the picture above.

Well, I’m sure not licensed to practice law in MO. (or anywhere else for that matter) but a fast reading of the letter of the law showed that this was going to be a fairly hard case to win, and the state has some particularly high hurdles to jump over in that case.

The defendants on the other hand, while their gun handling needs some retraining (a task I would love to have if I didn’t have to work my day job… they made several blatant “thou shall not” type errors that no doubt had Col. Cooper rolling in his grave, and it looked to me like they desperately needed a little Range Master Counseling, Navy and Marine Corps style.) They had every reason to fear for their lives, and with the castle doctrine in MO, it wouldn’t take much of a lawyer to get them a “Not Guilty” verdict.

That was before the latest things in the case.  First, the Governor has said he would pardon them if they were found guilty. (I hope he doesn’t, I want to see this play out.) Second, the State A.G. WHO WROTE the Castle Doctrine law I just mentioned has said that in his opinion the case is without basis, and he was investigating to dismiss.

Seems that the “Firearm” that the Local PD confiscated from the couple had been rendered inoperable.  According to the McCloskey’s attorney, Joel Schwartz, the firearm was inoperable at the time of the alleged crime.  It’s one of the requirements of the crime that the weapon being used must be “readily capable of lethal force”, and yet it seems that this weapon was disabled and used as a prop in a trial the McCloskeys had been defense attorneys for.  Yes, in case you missed it, this couple are both liberal civil rights attorneys.

And here’s the cherry on top of the Sundae: According to the MO crime lab, at the request of Assistant Circuit Attorney Chris Hinckley, the crime lab took it apart and rendered it functional (while documenting all of it on film… to cover their own asses).  AFTER Hinckley swore by affidavit that the weapon was “readily capable of lethal use when used.”

I foresee a very bad and very expensive couple of months for Hinckley and Gardner. Tampering with evidence is a crime. Further, I think even I could get a case for violation of the McCloskeys civil rights under the color of authority (or however the verbiage goes in MO.)

Lesson? DON’T try and make a case if you don’t have one, and seriously, don’t screw with people who know the law, and have enough money to live in a big ass mansion.  You will probably regret it unless you do everything strictly by the book.  Gardner wouldn’t even recognize the book if someone hit her with it (and they’re about to.)  This was political grandstanding at it’s worst, and that shit has no place in the law.  I hope she winds up penniless in GenPop, we’ll see how her “playing to the crowd” shit works there.  <Pass the popcorn>

Next up on our “How to screw up by the numbers hit parade,” take Portland… No, really, please take that shithole, and give it to, oh say China…

Well, the mayor of Portland has been dealing with rioters  Oh, sorry, gotta get my narrative right, “protesters,” for the last, well, since 2011 when the “Occupy Portland” piece started.  They’ve invented new phrases just for these douchebags including a “Portland milkshake” (mix quick Crete with a milkshake, it stays liquid long enough to get past the security cordon, then hardens up like a rock, plus the advantage of chemical burns on your victim) they’ve put people in the hospital, and killed a couple for the sin of disagreeing with them… recently the last 50 days have been nonstop protests and riots, including over one hundred arson attacks, including chaining the police inside a building and setting fire to it. Burning police cars, attacking anything with a police badge on the door or on the chest… you get the picture.

Through this all, the mayor, who is also the acting chief of police, has done nothing except cheer these clowns on and offer them porta-potties and free pizza. The offices of ICE and the federal courthouse have been favored places to trash, attempt to burn, etc… So Trump, having had enough, sends in a flying squad of Federales in SWAT gear and unmarked rental vans, to scoop these clowns up if they can nail or have the suspicion that they can nail them on any sort of federal crime.

Now, this is where it gets fun.

Said avowed Marxists, admitted communists, are now crying to the gun-owning public for sympathy and asking for armed support, on the “you’re next” ticket.

HA!  These are the same asshats that three months ago were telling me that “yes, I want the police to pry your gun out of your cold dead hands!”  Sorry comunista, but I’m all busy right now eating popcorn, and hoping you get the hickory shampoo that you’ve been threatening me with for years.

“BUT… DEATH SQUADS!!!” Uh, no.  If these are death squads, they’re the WORST death squads EVER.

To date, they have identified themselves as Federal agents, they have scooped you up without reading you your rights until later, (but here’s a news flash sparkly, IT IS NOT required that you be read your rights UNTIL the police question you.  This ain’t some crime show, you twit.  The only thing that not reading your rights does, is that if they ask you questions prior to Maranda, nothing you say in answer is admissible unless it’s an “involuntary exclamation.”  For example, I put the habitus grabbus on you, and before I can read you your rights you say: “Oh, SHIT you found the body!”  That, sugar pie, is admissible.) No one has been “Disappeared” or shot in the streets while begging for their lives with their hands up, no one has been given half a helicopter ride, no one has had their families taken… In short, no one has seen what a death squad looks like.  In point of fact, these guys look a lot like the guys they sent to grab a little kid in Miami under President Clinton…

Here’s the thing.  The left has been playing “Calvinball” for a long time.  (if you don’t recognize the reference, GTS, it’s good for you.)  Now, they want help and sympathy from the people they’ve been abusing.  Sorry, ain’t happening.

The right has started to play the game by your rules.

You can only be pissed on for so long before you cease to care what happens to the dick that’s been pissing on you.  We’re there.

I haven’t even discussed the Chicago gunfight at the funeral that left 15 people bleeding on the street in a gang on gang war at the funeral of a gang member… (sort of makes me long for the days of Capone, when at least they didn’t shoot up funerals and kept the violence strictly between the gang members.)

It’s crazy out there folks, and it doesn’t look to get any better soon.  If you are legally able you should be armed, if not for you, for your family.  If you don’t have to be in a city, GET OUT. If you think it’s bad right now, this is nothing on what it’s going to look like when the election results are in… And NO it won’t matter who wins, there will be bad times.  Have a plan, have resources. If I’m wrong, the worst that happens is you have extra food to eat later, and gear you needed anyway.  If I’m right, and you’re not prepared, it could be a very bad day.