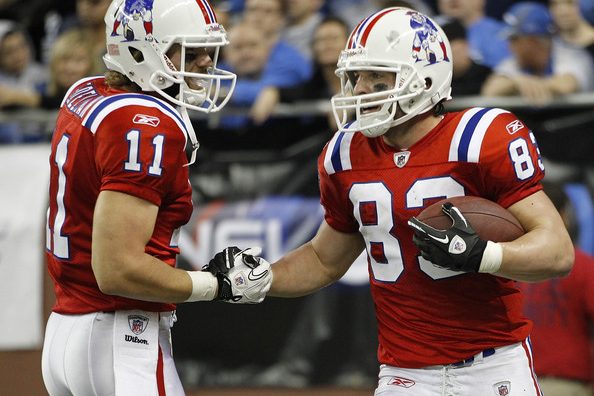 If I asked you who holds the record for punt returns for touchdowns in the NCAA, would you guess Wes Welker? Probably not. Despite not being invited to the NFL scouting combine, Welker would eventually carve out a role as the league’s #1 slot receiver for two of the greatest quarterbacks to ever play this game.

If I asked you what position Patriots wide receiver Julian Edelman played in college, would anyone guess quarterback? Not likely. He learned a new position and when he was finally healthy, he took the league by storm. He, like Welker before him, would become the most trusted target of the league’s most lethal offensive attack.

What do these two have in common? Both Welker and Edelman played on the same team, selected through various means by a coach who values the island of misfit toys. How did 31 other NFL teams miss out on these two extraordinary talents? I am going to sum it up like this, sometimes you just cannot measure heart. To quote the great Gene Hackman from the Replacements, “we need heart…miles and miles of heart.”

Bill Belichick’s value system is different than most, to say the least. He has the unique role of not only being his team’s coach, but also its general manager. He believes that it is better to get rid of a player one year too early, than one year too late. Belichick also sees value where others do not. Upon being asked as to why he drafted Edelman, a college QB, he responded, “He’s a good player. Not quite sure what he will end up doing for us, but I know he can do a lot.” What Edelman ended up doing is assuming the role of punt returner, a role that Welker had previously thrived in. Edelman learned the wide receiver position on the fly. It helped having a great teacher in Tom Brady, a former 6th round pick who plays every single play like his hair is on fire, a la Mel Gibson from Lethal Weapon. But Edelman would have to wait his turn, in part, to injury but also due to the fact that Wes Welker was Brady’s best friend. With Randy Moss taking the top off the defense by stretching the field, there Welker would find catch after catch, drifting behind linebackers and getting crucial yards to keep drives alive. It was and still is an ugly job, but from 2007-2012, no one caught more passes in the NFL during that time period than Wes Welker. NFL offenses can be run heavy, like the Cowboys of the 90s and presently. Others can be west coast, like the 49ers of Montana and Rice, or the Andy Reid version of the Eagles using short passes to the tight ends and running backs. The NFL as a whole had never valued the slot receiver before Wes Welker became a Patriot. Belichick’s willingness to try different concepts with above average players paved the way for Welker’s success and many more to come. Little did Wes Welker know that his heir apparent was drafted as quarterback in the 7th round of 2009.

Julian Edelman was just happy to be drafted. He knew early on that he would have to learn a new position at the next level. All he wanted to do was make the team, form a complimentary piece to the duo of Randy Moss and Wes Welker. Injuries, however, would take their toll on Edelman in the first 2-3 years of his career. In 2011, with injuries having decimated the Patriots’ secondary, Edelman was asked to played CB/Safety on defense. He excelled of course at a serviceable level. Belichick might be gruff on the media, but he always puts players in the right position. Another injury derailed Edelman’s career trajectory in 2012 and that offseason he and the team would be faced with serious questions- would Welker resign or go elsewhere? Would Edelman be offered to come back?

Welker, wanting to cash in one last time in his career, left New England to play for Peyton Manning in Denver. He flourished under Manning, just as he had under Brady, en route to a super bowl appearance in 2013. Facing an uncertain future and a bare minimum offer, Edelman received no interest from any other team and took the offer sheet that the Patriots offered him. With incentives, he would barely scratch 1 million dollars. Edelman knew that to be his best and play up to his potential, he had to do something drastic. He did the best possible thing, he bought a house on the West Coast close to QB and soon to be best friend Tom Brady. The Patriots, on the other hand, had looked toward free agency to replace Welker, guaranteeing a large amount of money to slot receiver Danny Amendola.

Amendola had a solid first game of the season as it began in Buffalo, but he was hurt late in the game. Edelman picked up the slack and then some. He caught 2 touchdowns in Week 1, and became the new version of Wes Welker. The tough catches, the 3rd down “got to have it” throws came Edelman’s way week after week. There was no one that Tom Brady trusted more to catch the ball. The rest they say is history. Edelman finished the season as the team’s leading wideout, and the next offseason he was rewarded with the financial security he had long dreamed of since he was a kid. He also made 2 crucial game changing catches in both of the Patriots’ most recent super bowl victories. If he does not make either catch, the Patriots do not win those games.

Wes Welker has since retired, due in large part to suffering many concussions over the course of his career. He is currently a coach and assistant to the Houston Texans. Julian Edelman is a current member of the Patriots and is signed for three more years. They put their bodies through hell, going over the middle for a catch that will most certainly render them defenseless against the Kam Chancellor’s of the world. But they did because a coach believed in them, and a quarterback trusted them to catch the ball that no one else could. As I referenced earlier in the film, the Replacements, “Winners want the ball when the game is on the line.” They received the passes in the game’s biggest moments and they did not disappoint. Heart can never be measured. But it can be seen the way players play the game. For Wes Welker and Julian Edelman, they have the hearts that every coach in little league wishes every player that they coach would have. And for that, as fans, we could not ask for much more.