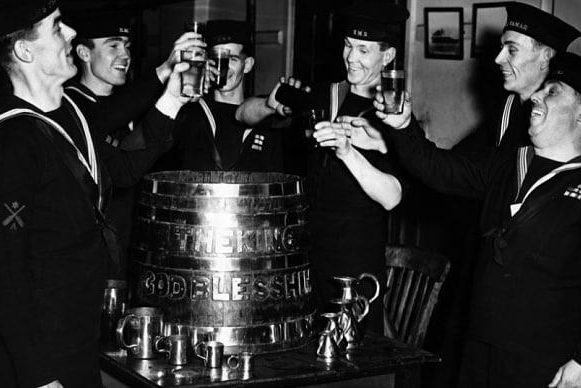 Welcome back to the scuttlebutt. Pull up a bucket, draw a mug, and let’s talk food.  Now I’ve been a fan of good food for a long time, you can’t serve in the submarine service and not like chow (often it’s the only bright point in a damn boring series of days).

The Mrs. and I recently went down to Oregon for a number of reasons, not the least of which was to visit with a shipmate of mine for many years.  Scott and I served together for a long time as the left and right hands of the Combat systems department on a submarine.  I ran Sonar, he ran Fire-control.  We were best men at each other’s weddings, got each other into and out of more trouble than any two sailors should, in short, we are brothers.  As a result, we make an effort to get together at least a couple times a year.

Well, this leads to visits to various bars, pubs, restaurants, dinners, dives, and other places where food and hooch are served. Which leads us around to the point of our tale: esoteric foods.

Hog wings.  Why did no one tell me about these?  (you don’t get to ask that, ‘cause I’m telling you now) Place called The Still House I believe it was, in Oregon city, makes them.  Take the shanks of a hog, which for those of you that aren’t butchers is the equivalent of the forearm, and lower leg, above the feet (or trotters).  Slow roast it in a fruit barbeque sauce until the meat shrinks back from the bone for about 3 inches. (about 2-3 hours at low heat), then serve it forth.  DAMN.  Folks if you can’t make it out there, go find a butcher and get some shanks. Make them yourself.  Seriously, you’re missing out.

Same place makes something they call Haggis balls.  Take a large Melon baller, or spoon, scoop up a chunk of properly cooked real Haggis, batter it in beer batter, and deep-fry it.  Serve with hot mustard.  These are very good, but tricky to make here in the states. (finding real Haggis can be hard.  And the Americanized stuff, baked instead of steamed then roasted, will NOT do, it’s like the difference between real fried chicken southern style, and a Banquet TV Dinner fried chicken.)

Then, since hogs can have wings, just to give equal time, one of the local Tapas bars (El Toro in Bremerton) makes a BLT with Duck Bacon.  What you ask is Duck Bacon?  Glad you asked.  ¼ inch thick slabs of duck breast, sugar cured and smoked like bacon would be, then fried like bacon.  Add sourdough bread, romaine lettuce, and beefsteak tomatoes, some garlic aioli, and serve.  It needs to happen.

Another one of these tapas type foods that I’ve ran into, sadly I’ll only get when we make it now.  The place up in Victoria that used to make them closed.  So, let me tell you how to make these, because they’re not to be missed.  Take several sheets of phyllo dough, with butter between each sheet. Into the center of this, place slices of granny smith apples, a little brown sugar (very little) and crumbled blue cheese.  Fold it over and seal it, freeze it, then deep fry it in a hot fryer until golden brown.  Now here’s the kicker. Put it on a plate and drizzle peach salsa over the top.  Each bite gives you crisp, crunchy, creamy, tart, sweet, spicy… your tongue literally does not know what to do, you’re getting hit with so many different sensations at once.

There’s a German joint in Seattle on First street south (and when I say German, the tables are long trestle tables, that you grab a place at the bench on…) called Alstadt. They make something that a philistine would call Mac and cheese.  They call it Spätzle mit kase und spreck.  This stuff is to Mac and cheese, what a nine-month aged sharp cheddar is to Kraft singles.  First, they use Beecher’s cheese, and three other cheeses (pretty sure there was some blue in there) then instead of macaroni they use homemade Spätzle, which is thicker than macaroni, not hollow, it’s a small noodle made by forcing special dough through a strainer, directly into boiling water.  Then they add thick chunks of slow cooked bacon, and caramelized onions into the mix.  Look this is not something you want to eat when you’re on a diet, and the serving size LOOKS small, trust me, it’s NOT.  This stuff is richer than Midas, but oh damn it’s good.

Another German place (well technically it’s Alsace Loraine) in the local area makes a Guinness float.  Yes, I said a beer float.  Don’t look at me that way, I’m serious.  Yes, it’s good.  I was dubious too.

Oh, and on the subject of booze, during this heat wave, let me recommend to you one of my old standbys: the Nutty Irishman. 1/3 Baileys Irish cream, 1/3 Frangelico, and 1/3 vanilla ice-cream.  Place in blender, buzz whir.  Instant adult milkshake!

Well, that should keep you cooking for a couple days, but I’m eager to hear what you folks have found that’s not to be missed.  So please, share your experiences.