Hell of a Day at Sea, Sir 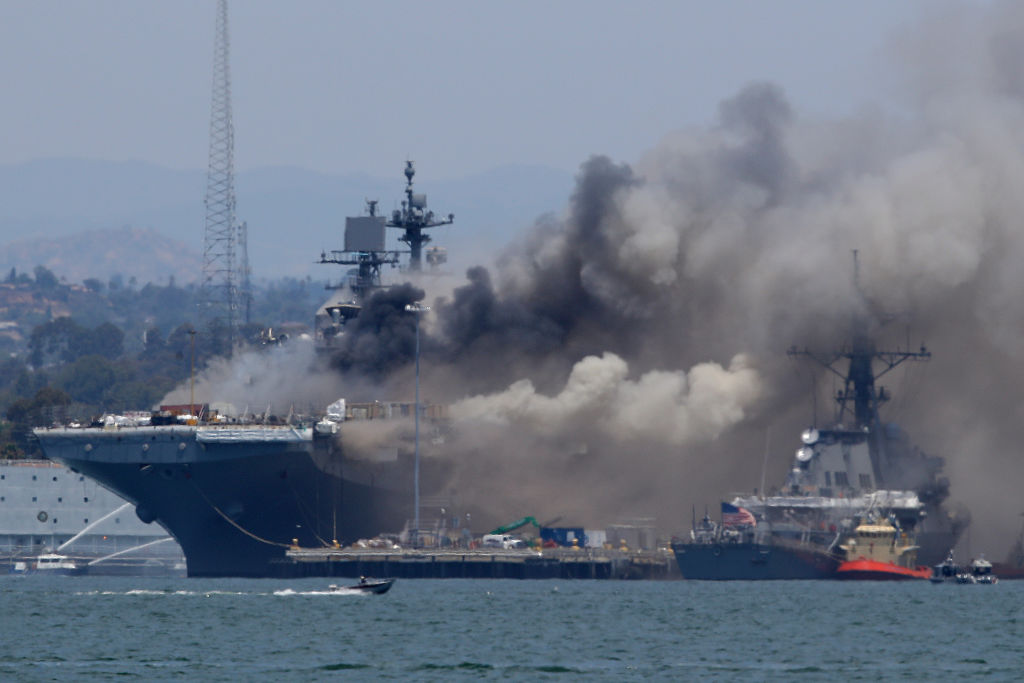 It’s been an interesting week, for Chinese values of interesting… And OH there are so many targets to talk about, from the last thinking liberal departing the NYT in an absolutely world-class Flounce, telling all and sundry off in no uncertain terms… To the further stupidity of the BLM crew, and so on… But, first and foremost, this is a blog about nerd stuff, Sci-Fi, and Navy stuff. And it’s been a really special week for the Navy.

Let’s start with the elephant in the room.  The loss of the Bonhomme Richard.

There, I said it.  She’s gone.  I realize that there are Admirals that are saying “it’s too soon to tell” and “we may be able to save her”… Yeah, bullshit.  The island is gutted, bent and warped from the heat, it burned through the flight deck and hull, her insides are absolutely gutted, and I don’t even want to think about what has been done to the bulkheads or the electrical plant.  She is BCM9  (that’s the code for beyond economic repair) Shit, she’s still burning in two spots on Wednesday evening after catching fire Sunday morning for Gods’ sake.  Look, I get it, we just spent a boatload of money making her F 35 capable… This sucks! (more on that in a second) but let’s be honest with ourselves, this sucker would cost twice as much to fix as just building one at this point.  I’m told we’re already evaluating bringing back one of the Tarawa class from mothballs as a replacement. Considering how old this vessel was, that’s by far the more economical solution.

It would cost even less if we didn’t suck so bad at mothballing ships.  There once was a time when we were the best in the world at putting a ship in layup status, in such a way as to keep her ready to be brought back in 90 days, ready to fight.  We still may be the best at it, but that’s just because EVERYONE sucks at it now.  Part of that is the technology is so much more complex than when we started after WWII, part is because no one took seriously the idea that we would bring these ships back, part of it is that we, for the most part, handed the work off to civilian yards, who do the minimum required by the contract.  The fact of the matter is there are lots of reasons, but why isn’t important.  It even gets into the environmentalists limiting the types of paint and preservatives we use.  Still, bringing back an LHA, as hard as it may be, will be cheaper by an order of magnitude than trying to rebuild a hull that is a shell with holes burned through it.

As to why it sucks so bad, well she was what, in any other navy in the world, would have been considered an Aircraft Carrier.  We call her an amphibious assault ship, but she had more punch than most carriers fielded by any of the potential enemies of our nation.  Losing her was as bad for the navy as losing an entire regiment would be for the Army. It’s a hell of a blow at a time when we’re liable to need her any minute.

Why would we need her any minute?

Well, that’s part two of “hell of a day.” The day after the fire started, The US officially called China on her shit.  The US State Department, for the first time, actually had the huevos to tell China that “we reject your claims to the South China Sea, they are illegal as fuck, and we don’t give a shit what you say about them, they aren’t yours… Oh, and we have the backs of our allies who’s lands, waters, and raw materials you’re trying to steal… So back the fuck up, Whinny the Poo.

That’s not liable to set well with Beijing.  Could this go to an actual naval war? Maybe.  If China thought they could win it, yeah they probably would.  They’ve been pushing hard everywhere, counting on the world being to distracted with the WHO flu, and the American Elections, and all of the other chaos going on, and figured no one had enough of a sack to stand up for what is basically a bunch of almost islands in the middle of a very big ocean, claimed by a bunch of “little countries”…

They (the Chinese) actually had the balls to say that to Vietnam and a  couple of other nations: “China is a large nation, and you are little nations, and you need to accept that reality”… Translation, “we do what we want, what the fuck are you going to do about it?”  So, there we are.

Then there’s the fact that someone is giving Iran a very bad week indeed.  In the last week, there has been a large string of unexplained and mysterious explosions and fires, taking out a lot of Iran’s nuclear research, missile research, and other military sites.  (it’s worth noting here that Iran and China are very close friends right now, in part because no one else wants much to do with either one of them.)  This includes suddenly, seven of their naval vessels are on fire…  Of course, the fun part of this, is that if the government of Iran calls it enemy action, and can’t strike back, they look impotent, which is worse for a Muslim nation than for an Asian one, and a certain Asian nation once took a second nuke before admitting that they had lost the war.  So they don’t dare suggest that it was the CIA or the Mossad, and even less will they admit that it might be internal dissidents unless they can find them and catch them.  The BBC stated the other day that there was a dissident group claiming the attacks, and had predicted at least one… Your mileage may vary, and even if true, who’s to say that it wasn’t funded by one of the various spook agencies that have every reason to hate Iran?

Now being an author, the one problem I have with all of this, is that if I were writing it, it would have to make sense, by being attacks and counter attacks in some renewal of the really bad days of the cold war.  Because you see, in fiction, stuff has to make sense.  The real world has no such obligations.  Could all of these happening in such close proximity just be coincidence?

Could the fact that the fire on the BR started in the early morning on a Sunday, when the minimum number of responders was available, and the Halon fire suppression system was tagged out, be just bad luck?  Oh yes.  The fire started (apparently) in a store room.  It wouldn’t be the first time that either carelessness or just bad luck started a fire due to a motor overheating, or spontaneous combustion from oil-soaked rags, or… any of a number of such causes.  And the fact that it started during a time when China probably knew we were about to slam down the gauntlet (it’s a matter of statecraft that you don’t really surprise your adversary out of the blue, unless you want to start a war… generally they get advance notice that you’re about to call them on their shit publicly.)

It’s even remotely possible that all of the bad stuff happening in Iran right now are accidents and coincidence.  Possible but NOT LIKELY. And all of this going down right after China pulls their shit in Hong Kong??? Well, let’s just say that it’s mathematically damn questionable.

When I said last week that we live in interesting times, I didn’t know how soon stuff would get even more interesting.  Folks batten down the hatches, I fear we’re in for a storm.