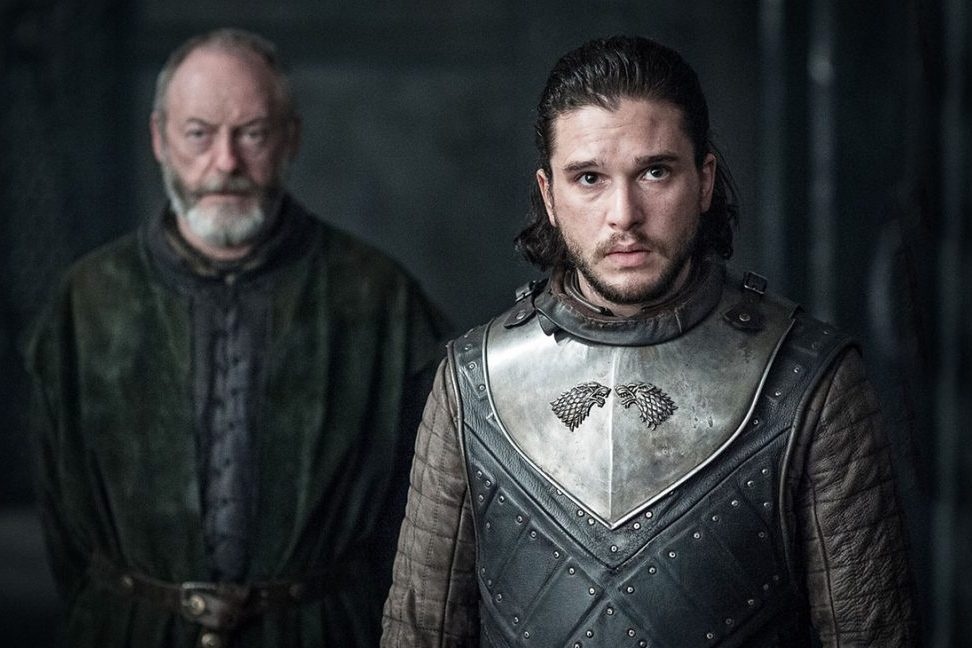 Things are moving very fast in Westeros. Show-runners and creators David Benioff and D.B. Weiss—this episode’s writers—wasted no time getting to the ice and fire of it all as the opening scene saw Jon Snow arriving at Dragonstone. They did however waste all of our collective time with that clunky, awkward and ultimately anticlimactic first meeting of the two likely saviours of Westeros, Dany and Jon.

We start with old pals Jon and Tyrion sharing a laugh and reminding us for the second week straight that they met a while back up north. The northerners give up their weapons—Jon does not have his white walker-killing valyrian sword, Longclaw, anymore—and proceed up a long passage to the old Targaryen fortress where they’re treated to a dragon flyover that they were probably not expecting. My reaction to a dragon might’ve been a little bit more hysterical and expletive-filled but I guess nothing really surprises you anymore after you’ve seen an army of dead people.

We arrive to the throne room where we finally get to see Daenerys and her badass hair sitting on her badass throne. This throne is very much on par with the Iron Throne over in King’s Landing in my opinion. But I digress. After hearing Missandei rattle off no less than 10 titles for Daenerys and Ser Davos barely fumbling out two for Jon, ice and fire finally meet.

This long anticipated meeting turned out to be a dud however as we got what amounted to this repetition of arguments from Dany: “I’m not my father, I’m the rightful queen, your ancestors swore an oath,” and Jon: “Your father killed my gramps and uncle, I’m not beholden to my ancestors oath, there is an army of the dead coming to kill us all.” Somehow they were able to stretch that into over 10 minutes of screen time that felt like 84 years.

After learning that the first half of his plan had failed Tyrion heads onto one heck of a clifftop to brood only to find someone who the Imp points out “looks much better brooding” than he does. It’s Jon Snow and he’s got his mopey mojo back as he’s realized just how heavy lies the northern crown. He’s brooding so hard over his failure to convince Daenerys of the existence of ice zombies that he completely forgets the whole reason he went down there in the first place. Thankfully Tyrion reminds the young king and proceeds to attempt to convince the young queen to allow the northerners to mine Dragonstone’s enormous cache of zombie-killing dragonglass.

As Tyrion attempts to sway Daenerys into giving the North this important resource for which she has no use, he gets called out by the queen for “trying to pass off your own statements as ancient wisdom.” We even got to see a rare non-fire inspired smirk from Dany, which is always a welcome sight.

Strangely though, after admitting he believes that there are ice zombies and convincing Daenerys to let Jon mine weapons to defeat them, Tyrion inexplicably brushes off Daenerys’ intrigue with Davos’ earlier misstep in saying Jon Snow took a knife to the heart. So what Tyrion, an army of ice zombies is believable but Jon Snow taking a knife to the heart and surviving is just a flight of fancy ? Make up your mind bud.

We then come to Daenerys’ entry in the best brood of the episode contest before she meets with Jon Snow to tell him that she’ll allow him to mine the dragonglass. But before they could do that, they had to restate their earlier arguments one more time, for old time’s sake I guess.

While not much gets done in a lot of time on Dragonstone, Sansa is delegating and ruling and sassing and making savvy decisions all over the place in this one. She’s getting the granaries filled, she’s fixing armour and she continued her streak of sweet, sweet burns on Littlefinger when Lord Baelish suggested to Sansa that Cersei is dangerous.

Littlefinger was right about one thing, ruling suits her. It is strange to note however that during this sequence Sansa is surrounded by men from the Vale, which Littlefinger controls, rather than men from the North, where she is from and where she resides. No sign of Brienne either which is very odd to me. She may have some sick burns for Littlefinger but it seems she’s still relying on him and his men heavily.

After Littlefinger seems to scare her a bit with what was either the best advice ever or the worst advice ever—considering Littlefinger’s success in this game of thrones it might be smart to heed his words..or not—we get another wonderful Stark reunion, this time between Bran and Sansa. The Lady of the North is rightfully pumped up and gives Bran a great big hug while Bran lays there motion and emotionless.

Sansa wasn’t pumped for long as instead of actually explaining the intricacies of what it means to be the Three-Eyed Raven, Bran gives her an unnecessary and creepy flashback to what was probably one of the worst days of her life to prove that he can indeed see everything that’s ever happened. You couldn’t have gone with something a little lighter there Bran? I know it’s been rough for you man but come on everybody’s got problems.

Needless to say it was a very disappointing return to the fold for Bran which I would’ve gladly exchanged for any screen-time for Arya or the Hound. I mean seriously how do we go an episode without either of them.

Thanks to the Jeor connection and Sam’s surprising skills in skin-removal, Jorah Mormont is back in action so look out Daenerys because your BFF is on his way to save you and the day once more ! Sam gets scolded/congratulated on his impressive task but then goes right back to his menial tasks. At least he didn’t have to deal with any bodily fluids this episode !

In other news, Theon is alive and looking like the palest prune I’ve seen while Euron has arrived in King’s Landing with his prizes in tow. As Euron boasts of his gift for the queen—the woman who murdered Cersei’s daughter and that woman’s daughter—Cersei stares at the gift with a rage I have never seen in my life. After a brief convo about Cersei’s likes and dislikes in the boudoir between Jaime and Euron, we get maybe the heaviest scene of the episode as Cersei doles out some more of her famous justice.

Anyways, during her monologue to the bound and gagged Ellaria Sand in the bowels of the castle, Cersei goes from understanding, to sadistic, to vulnerable, to sadistic before she tops it off with even more sadistic. (Lena Headey bravo, truly.) Needless to say she’s developing into quite the sociopath—and she’s enjoying every minute of it. After giving Ellaria’s daughter the poetically reciprocal kiss of death she informs the Dornishwoman that she will have to stay there and watch as her daughter dies then watch as her daughter’s body rots and decomposes. Ellaria will have to watch all of this all the while unable to say a word nor touch nor comfort her daughter. That’s rough even by George R.R. Martin standards boys.

Cersei is so turned on by herself and her torturous ways that she has no choice but to go find her broyfriend Jaime and suck the life out of him. After some obligatory nudity, we see that the Queen is so proud and brash that she’s asking unknown bed-maidens to change her sheets while her brother lays in view, in her bed, naked. Nice. Cersei then meets with the Iron Bank of Braavos and despite owing them huge sums of money, convinces them to support her side by citing the fact that Daenerys didn’t agree with slavery. Why that is even a topic when discussing who will reign in Westeros where slaves are forbidden is beyond me, but the Braavo is swayed nonetheless and Cersei adds one more brick to her dragon-proof wall.

But what about Cersei’s home seat, Casterly Rock ? Surely the Unsullied will be able to do some damage there thanks to Tyrion’s clever plan of going under the sewers and through his lady hole. But just as you start enjoying Grey Worm’s kick-ass battle sequence the fighting stopped and wouldn’t you know it: there’s good ol’ two-eyed Euron and his Kraken ships trashing and burning the Unsullied fleet—en lieu of a siege of Casterly Rock I’m guessing. But where then, are the bulk of the Lannister armies ?

Duh, they’re with the Lannister commander, Jaime Lannister. People forget how great a battle commander and warrior Jaime is because he was captured by Robb Stark after the clever Young Wolf diverted most of his armies to an unexpected target and subsequently captured the kingslayer. As Jaime points out, he learned from that mistake and used that lesson to grab a smashing victory with the help of Randyll Tarly—one helluva general himself—and the bulk of the armies of the Reach. We even get a glimpse of Bronn though we don’t get any snarky remarks from him unfortunately.

While it seems strange that Olenna doesn’t have more armies at her disposal, it’s important to note that with her son dead the leader of the Tyrell army was technically Tarly, so when he chose the Lannister side, the armies followed suit since there were no Tyrell’s left to command them. The fact that she lost an embarrassing battle didn’t stop the Queen of Thorns from having one of the best final scenes of any GoT character though, as she was dishing out the emotional daggers until her very last.

After calling Jaime a fool and a failure, naming his dead son a cunt and informing him that his sister/lover is a disease Lady Olenna is still given a merciful death by the generally good-hearted but Cersei-corrupted Jaime. It was actually extremely merciful when you compare it with Ellaria’s fate in fact. Olenna downs her tenderly poisoned wine like a boss before she finally tells Jaime that it was her who killed Joffrey and that she wants him to tell Cersei it was the Queen of Thorns who killed her eldest son. Talk about going out with a bang. We’re gonna miss you Diana Rigg, thanks for teaching Sansa how to craft a good burn.