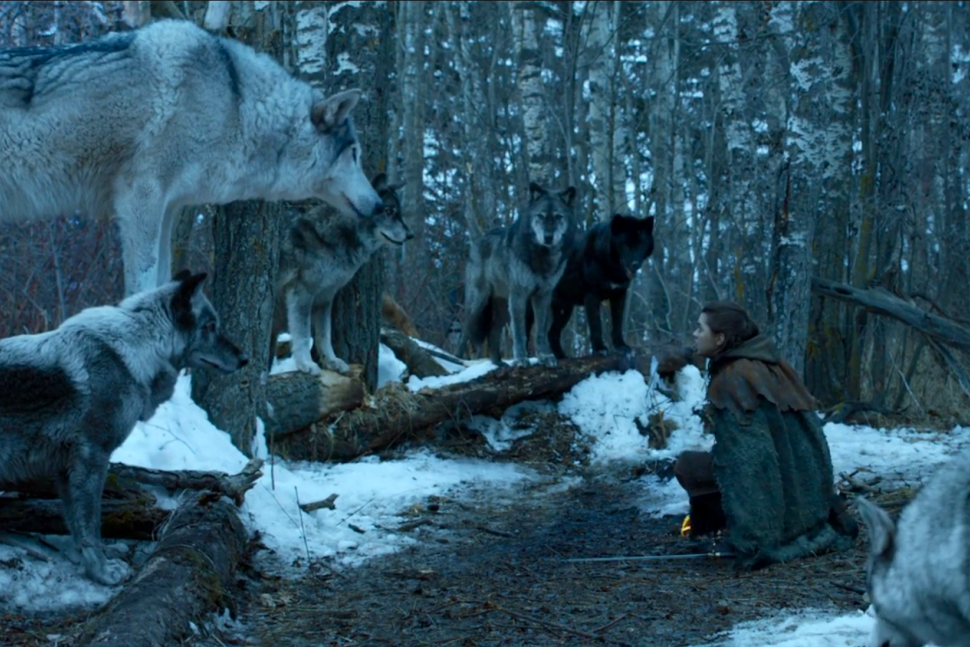 We didn’t get to hear from the cleverest dwarf in Westeros last week, but Tyrion Lannister got the opening line of this second episode. He doesn’t get the chance to say much past that however before Daenerys and Varys get into it over Varys’ penchant for flip-flopping from king to king to queen. But Varys’ impassioned monologue about how he started from the bottom and is now here swayed Dany’s gentle heart and convinced her (and me, kinda) that he’s finally to be trusted. Dany’s heart seemed a tad less gentle when she told Varys that if he betrays her she won’t have him decapitated or fed to her dragons like Varys had suggested, she’ll have him burned alive. When she makes the threat we see a hint of a smile (is that half-smile like a prerequisite for women to be on this show or something? So awesome.) that leads one to believe she can be just as brutal as she can be gentle. Get you a queen who can do both.

While Melisandre showing up on Dragonstone may seem a bit fast just bear in mind that she came from far closer than Daenerys just did, so her arrival isn’t really that implausible. The Red Priestess mentions the prophecy of ‘the prince that was promised’ which is quickly modified via proper translation by the world’s best and most beautiful translator, Missandei, to actually mean ‘the prince/princess that was promised’. While it seems as though Melisandre is telling Dany she’s this prince/princess, she never explicitly says so, slyly dodging the question before shifting Dany’s focus to the other possible prince/princess who was promised aka the guy Melisandre literally resurrected: King Jon Snow.

Dany’s war council seems to be at odds at first glance, but after putting Ellaria in her place and giving Tyrion the floor, Dany seems to have everything under control. Tyrion’s plan is not only ingenius (other than the fact that, you know, he didn’t know that Euron was on this side of the continent) it also pushes his allies to trust him more because he’s made toppling his own family’s seat one of his primary objectives. The unique nature of Game of Thrones then shows itself as it cuts from a war council to a sex scene without skipping a beat. Though the (kind of) sex scene between Missandei and Grey Worm was a bit strange considering the guy’s a eunuch, it was a touching scene nonetheless. Not to mention GoT hadn’t had any on screen boobs since mid-season six so they had to get back on track with their boobs and blood image.

After Melisandre’s appearance, Tyrion writes a letter at Dany’s behest that arrives to Jon Snow at the speed of an SMS text and which contains important information. Tyrion asks Jon to come treat with Dany, mentions their three dragons and even stuffs a little season 1 nugget in there for Jon as well as us. While Sansa of course disagrees with Jon on the matter of meeting with Dany, Ser Davos makes a great point that not only does Dany have a shitload of dragonglass and an army, she also has dragons that can breathe fire, which would be a pretty solid weapon if you’re fighting a war against ice zombies.

Jon then brings the matter to his bannermen as he does, along with the information about Dragonstone sitting on a big ol’ pile of dragonglass (thank you Samwell for having the nuts to send that letter). This time though, the King can’t even count on the support of Lyanna Mormont when he tells his people he will meet with a Targaryen. (Does anyone else see the irony in the fact that Jon’s bannermen say a Targaryen is not to be trusted but are actually following one without knowing it?) Once again Sansa calls the King out in front of his bannermen only to be rendered speechless when she finally gets what she really wanted: the North. Before Jon leaves though, he has a bit of a tiff with Littlefinger in the shadow of Ned Stark’s statue then proceeds to emulate his supposed late father by choking Littlefinger. This led the conniving Littlefinger to stab Ned in the back in season 1, will Jon Snow be able to watch his back better than Ned did ? Will Sansa ?

Jon Snow going south to Dragonstone likely means that, waddya know, he’s gonna miss the return of the prodigal assassin, his favourite sibling Arya. With Arya’s luck Sansa will have left Winterfell too by the time she gets back. Sigh. While some may be disappointed she didn’t stay with Ed Sheeran and the gang, I’m glad Arya moved on. She is definitely a lone wolf. Instead, we get an improvement on Ed with a wonderful return cameo from one of Arya’s only friends, Hot Pie. The young pudgy baker tells Arya two things we’ve ALL been dying to tell her for quite some time now: one, that Jon Snow is King in the North and at Winterfell—though Hot Pie makes no mention of Sansa which is important to note because when Arya arrives it will be Sansa ruling, not her favourite sibling Jon— and two, “I can’t believe I thought you were a boy…. you’re pretty.”

Arya reconnects with another long lost friend in the episode as we finally see her direwolf—aptly named Nymeria—return to the fold. It’s only a quick visit before Nymeria goes back on her way because, like Arya in season 1, “it’s just not you”. I was originally frustrated at this scene for bringing back a book hero like Nymeria only to send her on her way a few seconds later. I’ve come to realize, well hope really, that Nymeria may be able to play a pretty big role in the wars to come. In the books a chapter doesn’t go by in the Riverlands without mention of the havoc being wreaked upon all the Stark enemies by a pack of wolves over 100-strong that’s led by an enormous she-wolf.

Jorah Mormont must be a more important character than I thought because they are spending an awful lot of our and Samwell’s time keeping him alive. Samwell continues to do the most disgusting shit on the show week in and week out. From puking on the boat last season, to cleaning latrines and greyscale this season, the kid attracts filthy situations. Also, it’s always interesting to me when characters from different storylines finally converge and share a mutual acquaintance like Jorah and Samwell do. Thanks to that mutual acquaintance—Jorah’s father and essentially Samwell’s surrogate father Jeor—the young maester-in-training goes against his boss’ wishes (that’s twice in two episodes! Atta boy Samwell) and decides to attempt a procedure only completed successfully twice before. I can’t see the procedure failing or else what was the point of all this? Jeor Mormont nostalgia? Unlikely.

Mad Queen Cersei undoubtedly made the most moves this week, and she had to. Her back was against the wall and that wall was about to be scourged by dragons. Her and her broyfriend Jaime brought the lords of the Reach—bannermen to the Lady of Thorns, Olenna Tyrell—to her throne to appeal to their mislike/fear of foreigners and immigration. Funny that, when Game of Thrones starts to mirror the real world. Lord Randyll Tarly seems pretty obviously more concerned with the threat of foreigners on his home-soil than with his honour as a Tarly and as a knight.

Cersei’s not done there though, her minion Qyburn has also been at work on a possibly dragon-killing, spear-sized crossbow. The demonstration was pretty cool but to be fair, living dragons have pretty hard scales, not to mention that skull they shot was 300 years old and hella brittle. Nonetheless, I’m thinking the contraption will do some damage, maybe even bring one of the three dragons down when the war finally comes to King’s Landing. Another brick in the wall for Cersei, and she did it without a single chalice of wine!

A brick Cersei laid in her wall of defence last week, Euron Greyjoy, made a surprisingly quick return to the story this week as well. Just when you think you’re about to get a sex-scene between two of the most powerful women in Westeros, Game of Thrones pulls the rug out from under you and instead shit is going the f down. Euron’s awesome ship, which is called Silence and manned completely by mutes, splits Yara’s vessel almost in half with its badass, toothed boarding rail, which kills a dude on its way down. That’s what I call an entrance.

The part of that battle sequence that was most interesting to me however was when Euron defeated Yara and started barking at Theon. Through the whole episode Theon says all of two words yet fights very valiantly during the battle. But when Yara, his shield and his protector, is captured and subdued he begins reverting back to Reek. The sounds of battle and brutality mixed with the images of Euron’s goons cutting out the tongues of the men they’ve vanquished to replace the dead mutes on the Silence bring us and Theon back to his tortured time with Ramsay. Though it seems Ramsay’s abuse of Sansa has made her a stronger more wary person, the opposite seems to be true of Theon, as the torture he suffered at Ramsay’s hands has left him forever broken. After being taunted by Euron I almost thought I’d hear Theon say “My name is Reek, it rhymes with weak.”

That battle was quite the spectacle though, wow. Some may say “Oh this is bs, how could Euron already have so many ships?” To them I say Euron has been building his armada since Season 6 Episode 5 and in the show’s timeline has had time equal to Yara sailing halfway around the world and back again. Not to mention the Iron Islanders are known as the best shipbuilders in the world. But I digress. We were asking for something to happen after last episode was filled with all talk and no walk, and boy did we get it. There were four different times where I thought for sure Euron Greyjoy would be killed but somehow he ended up blood-soaked, cackling and victorious after withstanding about seven of those arrow thingies from the Sand Snakes, killing not one but two Sand Snakes, beating Yara in one-on-one combat, snagging Ellaria Sand, the third Sand Snake and Yara as hostages and completely destroying Yara’s (aka Daenerys’) fleet. Now Cersei has smashed nearly all of her rival’s fleet and likely taken what’s left it along with three high-value hostages. Your move, Daenerys.