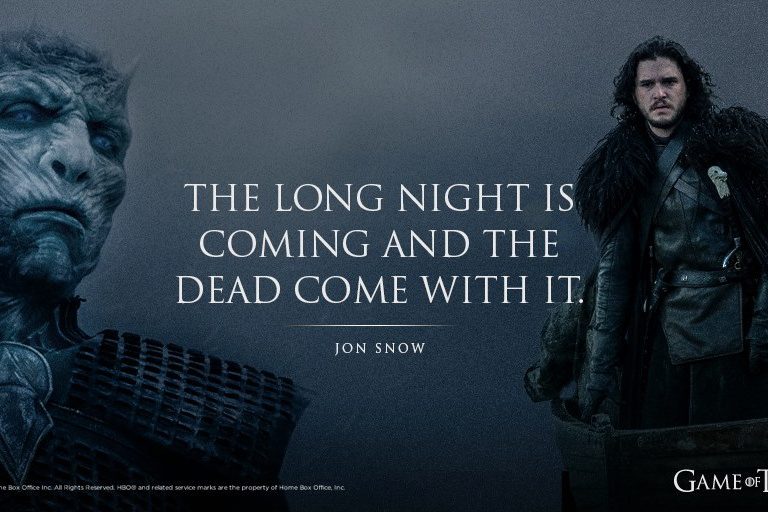 Did that not feel like the longest 13 months of your life ? So much has changed in the real world over the past year that I almost forgot about our friends out in Westeros. Not really though.

HBO’s juggernaut series Game of Thrones FINALLY kicked off it’s penultimate season on Sunday. While the premiere certainly didn’t deliver the same kind of jaw-dropping or satisfying moments as last season’s final two episodes—remember Cersei’s explosive removal of 11 regular cast members in one fell swoop? Or Sansa’s feeding of Ramsay to his own starved hounds?—it still delivered several of its own very memorable moments.

To start the season we got a rare cold open—just the sixth time GOT has done this in its 61-episode run—featuring old, decrepit Walder Frey, who’s arrival in nearly any scene sets my skin to crawling. While this seemed at first to be a flashback, the true nature of the situation soon became clear when ‘Walder’ says “after all, we just had a feast,” referring to the feast depicted in last season’s finale after which Arya slit Walder Frey’s throat. Arya already showed when she killed Walder that she’d truly mastered her skills as a Faceless Woman, so why not use the old man’s face to finish off the rest of his gnarly brood ?

As Arya, wearing Walder’s face, toasts to the Freys and their triumph at the Red Wedding, her words get harsher, the music intensifies, the Freys begin coughing and finally begin realizing what’s afoot as they all crumble to the ground. Once all the Freys are down for the count, Arya finally reveals herself and delivers one of her best lines yet to the surviving servant girls: “When people ask what happened here, tell them the North remembers. Tell them Winter came for House Frey.” Arya’s smirk as she walked through the lake of dead Freys and out the door after that—which was extremely reminiscent of Sansa’s half-smile after she fed Ramsay to his pups last season—was just icing on the cake.

Arya ended the whole Frey line without breaking a sweat and still found time to kick it and have a few drinks with Ed Sheeran all in just one episode. I think we’ve got ourselves one truly bad-ass Stark assassin ya’ll. Next stop: King’s Landing and a date with Cersei.

The rest of the episode after that amounted primarily to setting the stage for the rest of the season as the three sides—Cersei, Daenerys and Jon—looked to gather strength, allies and resources for the coming war while Jon deals with the added task of being in the North during winter and… oh yeah, the invading army of magical ice-zombies/humanoids. It’s more of an “Okay, here’s what we’re gonna do” episode than an episode where anything actually happens. Tyrion doesn’t even say a damn word for f*** sakes! To be fair, some seeds of intrigue were sewn here and there.

One scene that I’m betting went largely unnoticed is the one that intrigued me the most. It was the one featuring the long shot of the Night King and his squad’s slow march to the magical Wall along with the more-than-welcome return of now-Lord Commander Dolorous Edd Tollett, who greets and takes Bran through the Wall and into Castle Black. This scene is intriguing for two reasons: firstly, Dolorous Edd was appointed Lord Commander by one of his best buds, Jon Snow, who just so happens to be Bran’s half-brother (he thinks). Jon and Bran reuniting would mean much more than two family members seeing each other after a long, arduous separation, it would mean Bran could tell Jon about his true (Targaryen) ancestry; as the new Three-Eyed Raven is the only living person on the show who knows of Jon’s true lineage.

The second reason is this, last season while in a green dream, Bran’s arm was grabbed by the Night King. This allowed him and his frozen cronies to enter the old Three-Eyed Raven’s underground hideout to kill the old bird despite the magical spells surrounding the hideout that should have prevented the magical white walkers from entering. As Benjen told us at the end of last season, similar spells were woven into the Wall to stop the dead from passing. So the question is, will Bran’s passing through the Wall allow the Night King to pass through the Wall’s magical spells as he did with the old Three-Eyed Raven’s hideout last season?

Just south down at Winterfell we get a glimpse of the start of Jon’s rule as King in the North. When he attempts to convince his vassals to begin teaching women to fight, the young, fiery Lyanna Mormont once again comes to his aid with one of her classic ‘put-em-in-they-place’ monologues. We then get a hint of sibling rivalry as Sansa adjusts to her position at Jon’s side and vice versa.

We also get another peak at the comical but cute romance that’s burgeoning between the persistent Tormund and the apathetic Brienne of Tarth in the yard at Winterfell. Afterwards, we see another attempt by Littlefinger to get a now significantly more politically savvy Sansa to do as he wants. Sansa summarizes their exchange in one annoyed sentence: “No need to seize the last word Lord Baelish, I’ll assume it was something clever.” Safe to say she’s sick of it.

Much further down south, we now arrive at King’s Landing, where a mother of none will undoubtedly soon come to blows with a mother of dragons. For Cersei’s part, she seems confident as ever as she strides across her nearly finished painting of the Seven Kingdoms—which I would gladly have commissioned for my own wall—with her obligatory full chalice of red wine ready to be dramatically sipped at a moment’s notice. She keeps her confident demeanour even after her broyfriend Jaime tells her she’s queen of maybe three kingdoms of her supposed seven, at best, while boasting no enemies to speak of. But just when you think the Mad Queen had played all her cards, she pulls another one out of the water.

Though the show has mostly butchered the character of Euron Greyjoy— most notably leaving him with two eyes when he should have just one, hence his novel nickname ‘Crow’s Eye’—he has been brought back into the fold as someone evil, sadistic and opportunistic enough to take Cersei’s side in the coming war against a side that boasts a trio of dragons. Euron seems more charming and intriguing than he did last season as he makes his proposal to Cersei; though he’s still got one too many eyes in my opinion. Before he departs, however, he speaks of a great gift he will find to woo the great Queen Cersei, but doesn’t hint at what it might be.

This may be one of the last times book readers like myself can smugly say with a degree confidence we know what’s gonna happen next in the show. In the novels, during the kingsmoot during which Euron was declared king, he made his entrance to the sound of a Valyrian dragonhorn that, according to his narrating brother, sounded like “a shivering hot scream that made a man’s bones seem to thrum within him,” and “the horn of hell.” Allegedly, the horn can control dragons and also killed the man that blew it at the kingsmoot. Controlling dragons would serve Cersei pretty darn well in a war where she’s currently losing in terms of dragons by a score of 3-0. Whether Euron will actually find this horn or whether it actually does control dragons is still very unsure, but there’s no doubt it would give Cersei’s side a huge advantage in a war where she doesn’t seem to have any chance at the moment.

The Hound, Beric Dondarrion and Thoros of Myr are back and their not-so-merry band of outlaws seems like it could end up being a big wild card when the Great War occurs if they can survive the blizzard they’re in during this episode. The drunken remarks of Thoros and the classic deadpan humour of the Hound are perfectly suited for one another and will certainly join Tyrion Lannister as one of the show’s few sources of comic relief. On a more serious note, however, the mystical ways of the undying Beric and the resurrecting Thoros seem to have rubbed off on the Hound as Sandor Clegane witnessed the army of the undead in Thoros’ flames. This means the group of characters still in white walker denial grows even thinner.

Samwell Tarly is also still here people, don’t forget. After Jon mentions humankind’s sore need for obsidian/dragonglass/valyrian steel to defeat the white walkers earlier in the episode, we go to Sam at the Citadel where he gets his grubby mitts on a tome he stole from a restricted area in the library that tells him Dragonstone has an enormous deposit of dragonglass. He writes a letter to let Jon know of this huge discovery, but whether that letter makes it to Jon is far from certain. Jorah Mormont is back and looking disgusting as ever as well. Good luck with that greyscale over there, buddy.

Though the episode is called ‘Dragonstone’ we don’t arrive to the eponymous island until the final five minutes of the episode, in which we see Daenerys, after six seasons of toiling and waiting, finally feeling her home soil under her fingers and toes at long last. The facial acting by Emilia Clarke (who plays Daenerys), necessitated by the lack of dialogue, was truly superb throughout the sequence. As she walks through the ancient Targaryen fortress she strolls by the throne and comes to a stop in the room of the legendary painted table—a table carved in the shape of the seven kingdoms—before uttering the only icy words of the scene: “Shall we begin?”

This episode wasn’t the flashiest but it set the stage for what promises to be a wild and wacky, wintery and wonderful penultimate season. So, yes, Daenerys, we shall begin. Just try not to remind me of the fact that there’s only 12 episodes left now…